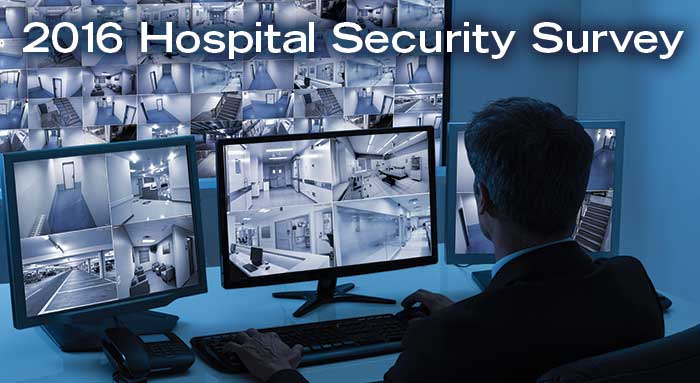 In response to increasing security risks and growing pressure from regulatory agencies, including the Centers for Medicare & Medicaid Services and the Occupational Safety and Health Administration, a majority of hospitals have adopted aggressive training programs designed to de-escalate security situations before they erupt.

Many are creating the programs in house and tailoring them to their needs. For example, a facility may feel the danger level is higher if security officers are inside a patient’s room. Working in tandem with security officers, those hospitals are training clinical staff to de-escalate the situation.

A marked increase in such aggressive management training is one of the key takeaways from the 2016 Hospital Security Survey conducted in June by Health Facilities Management and the American Society for Healthcare Engineering (ASHE). In all, 255 respondents returned completed surveys, with 95 percent coming from facilities, security, safety and risk management directors or managers.

Seventy-five percent said that maintaining security has become more challenging over the past two years. In response, 85 percent are using aggressive management training while another 5 percent plan to implement the training in the next year.

“Many hospitals spend a lot of time and energy responding to emergency incidents after they happen,” Smith says. “It is very important to have plans and training in place for these types of incidents, but first we should focus on prevention. By this I mean effective workplace violence policies and procedures and a trained multidisciplinary threat assessment team.”

Identifying behavior that could lead to escalated violence is one of the first steps to preventing emergency incidents, says Chad E. Beebe, AIA, FASHE, deputy executive director for advocacy, ASHE. “However, it requires many other security protocols to be in place,” Beebe explains. “The more people who are able to identify possible situations, the more likely a preventive measure can be deployed.”

Hospitals are doing a good job of putting those security protocols in place, the survey shows. Seventy-eight percent conduct a physical facilities security assessment at least annually, while 97 percent have workplace violence policies and 95 percent have active-shooter policies. Almost half are using a combination of in-house and outside security firms to conduct security/risk assessments.

Hospitals continue to put resources into another critical component — technology. Most are using systems like access control and digital video surveillance, while a growing number plan to invest in the next two years in visitor management systems, electronic lockdown from a central location and RFID for tracking equipment, supplies and medication. Some hospitals (25 percent) are starting to experiment with biometrics authentication, an access control/identification system used to protect sensitive areas such as the pharmacy.

But while more than half of those surveyed experienced security budget increases in 2016, the vast majority (69 percent) does not plan to add new security staff in that time. Staffing issues frequently were cited by anonymous survey respondents who mentioned “lack of staffing and reduced budget” and “more incidents, no increase in staff” as among the reasons security has become more challenging.

Experts say those numbers are likely connected to the ability of security managers to make the case that more staff will reduce risk.

“When you’re talking to the [finance people], you need to show them the numbers,” says Karim Vellani, CPP, CSC, independent security consultant, Threat Analysis Group LLC. “If security directors are not keeping track of incidents or underreporting them, they won’t have the data to justify more staff.”

Although gauging an accurate staffing ratio is critical, no federal agency has established mandatory requirements, says Bryan Warren, CHPA, director of corporate security, Carolinas Healthcare System, Charlotte, N.C. Because hospitals determine their own ratios, he suggests following best-practice guidelines like the model he developed for IAHSS, while serving as president in 2012.

“Security directors need to have an accurate ratio to justify existing staff or make the case for adding more,” Warren says. “You can replace an officer with a camera, but you will never replace the need for having an employee on the scene, responding to an incident.”

Although some hospitals — mainly in urban areas — are hiring contract, off-duty police officers or a combination of both, most are not yet going that route, according to the survey, which shows that 64 percent do not contract security officers at their facilities.

While isolated crime incidents at hospitals occasionally grab news headlines, shootings and incidents of infant abductions and sexual assault remain rare at facilities across the country, the survey shows.

There has been an increase in attacks and assaults, however. Increases were reported in patient/family violence against staff in the emergency department (ED) (51 percent) and patient/family violence against staff excluding the ED (44 percent). Results are in line with survey comments including, “social disorder has increased/patients and families are more prone to act out,” and “more violent patients are coming to the hospital. We deal with mentally ill patients daily.”

Along with greater reporting of incidents by hospital staff, Warren says that increases in attacks and assaults are being driven by growing numbers of behavioral health care patients reporting to hospitals.

“Funding has been stripped for behavioral health care patients,” says Warren. “EDs across the U.S are filling up with these patients and there just aren’t enough beds, which creates any number of workplace violence issues.”

Those mounting tensions in EDs often lead to incidents involving staff and family members, he said.

Another critical security issue is the opioid epidemic that is creating challenges security managers couldn’t have imagined even 10 years ago. In 2014 alone, there were more than 14,000 prescription opioid overdose deaths, with more than 1,000 ED visits every day for prescription opioid misuse in the U.S., according to the Centers for Disease Control and Prevention.

“The [opioid] epidemic most certainly has something to do with rising crime rates in hospitals,” Vellani says. “It is possible that patients are more willing to resort to violence or do not have the rationality to avoid violence.”

“It is in the top three security issues hospitals are facing,” Warren says.

One hospital on the front lines of the opioid epidemic, as well as increasing ED violence, is relying heavily on an aggressiveness training program that was created by hospital staff.

Boston Medical Center (BMC), a 500-bed, 41-building hospital located close to a county jail, a homeless shelter and a methadone clinic, handles anywhere from 10 to 25 opiate overdoses each month, says Constance Packard, CHPA, executive director of support services, Boston University Medical Campus and current IAHSS Foundation president. The opioid crisis is linked to crime ranging from theft, trespassing and vagrancy to fighting, assaults and the use of weapons.

Staff training is critical to the BMC security plan that also relies on uniformed police officers from the Boston Police Department in addition to security staff, she says.

“We developed our own de-escalation program, relying on two training specialists who have worked with me for 25 years,” says Packard, who has been with BMC for 30 years. “It has really been a highly effective tool at [BMC].”

The training, which focuses on verbal de-escalation and physical restraint skills, also includes scenario training using videos developed by Packard’s team that re-enact possible active-shooter security incidents. The videos are available for other hospitals to access as training tools.

“Clinical staff can use a panic button, but what do they do in that moment until security gets there?” says Packard. “What if a person on drugs comes into the emergency room and is combative, for example? Through training, we teach staff how to respond to prevent a number of potentially dangerous situations from escalating.”

Despite increasing security challenges, the vast majority of hospitals are still not providing security staff with firearms. In fact, the majority of security officers are not using stun guns, the survey shows.

Hospitals tend to make decisions about weapons based on a number of factors related to their individual needs, Vellani says.

“For those hospitals that choose not to use either armed security or police, it’s possible that their unique risks do not warrant armed personnel of any kind,” Vellani says. “There may also be a philosophical reason why some don’t have armed personnel. A lot of them are faith-based [organizations].”

While BMC isn’t a faith-based hospital, Packard said security officers do not carry guns or Tasers but are trained to handcuff, and carry pepper spray and collapsible batons. The medical center is among the growing number of hospitals that also are equipping officers with Narcan, a drug that can reverse an opioid overdose in a few minutes.

“Handhelds are very portable and a lot of hospitals use them in specific situations, such as with suicidal patients and in EDs,” Warren says. “To have every person, including staff, walk through a metal detector just isn’t feasible in an emergency setting.”

Despite the increasing complexity of security issues, Smith says that maintaining a safe, healing environment for patients, staff and visitors often comes down to the basics.

And ask yourself a few key questions: Are policies and procedures up to date with current best practices? Are security and clinical staff on the same page when it comes to high-risk areas? Do you know who is in the building, and are there processes to help keep them in authorized areas? Do duress alarms and emergency intercoms work as designed? Are security doors, cameras and access control devices working and maintained as intended?

As Smith says, “There are always things that can be done to improve security that don’t require additional resources. Many incidents are preventable if our staff, patients and visitors know how to report threats and unusual behaviors.