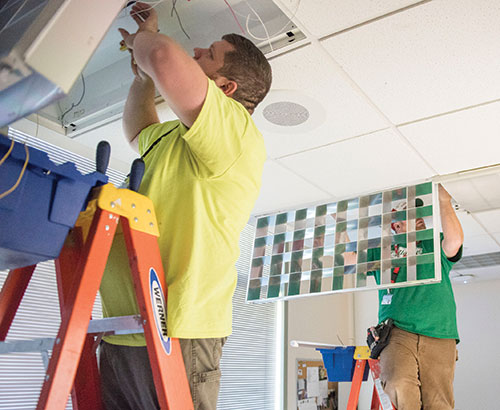 Touted as the largest of its kind in the health care field and one of the largest in any business sector in the nation when the green revolving fund was announced in May, Cleveland Clinic is moving quickly to increase its energy-efficiency index by investing in large-scale, energy-saving projects.

Jon Utech, senior director of Cleveland Clinic's Office for Healthy Environment, says the health care system is about halfway finished with a major LED replacement project at its main campus, which includes the flagship hospital as well as regional hospitals and family health centers in Northeast Ohio.

Cleveland Clinic also is about halfway finished with a building automation system (BAS) upgrade on its main campus and at its other facilities, Utech says.

A third project, optimizing a chiller plant on Cleveland Clinic’s main campus, also is contributing to an overall energy reduction.

The LED lighting rollout involves replacing 250,000 fluorescent lights in all of the system’s facilities. The retrofit is projected to save the health system about $2 million annually by reducing electric consumption by 28.6 million kilowatts each year.

Lighting accounts for 16 percent of Cleveland Clinic’s total energy use and was identified as the health system’s most visible, accessible and immediate opportunity to reduce energy after it conducted a lighting systems analysis. The project, which costs $10 million, is funded by the GRF and other sources.

Energy Star-qualified LED lights last up to 10 years, nearly 2.5 times longer than fluorescent lighting, and are mercury-free. When finished next year, the lighting retrofit will reduce the health care system’s carbon footprint by nearly 19,400 tons of CO2 annually, according to Cleveland Clinic.

As an added bonus, the project has created some 20 new jobs for the installation and manufacturing of the lights. That benefit is important to Cleveland Clinic’s overall mission of care, Utech says. “Increasing the economic health of our region is part of making our population healthier,” he adds.

The building automation upgrade also is a work in progress that, when completed next year, will result in substantial energy savings, he says. The project requires updating tens of thousands of data points and pieces of mechanical equipment on the main campus and at other sites.

Utech says the system upgrade features a high-functioning analytics package that will give facility staff details on equipment performance. The system will issue reports and make recommendations on potential fixes or improvements. “It’s an analytics package on steroids,” he says.

The upgraded BAS required about a $1 million investment from the GRF and is projected to save the health system about $500,000 annually when it becomes fully operational next year. The chiller plant optimization project required a $250,000 investment from the GRF and is expected to save the system about $125,000 a year, Utech says.

The GRF invests in energy-efficiency projects and is then replenished from savings for future projects. The fund was financed through the health system’s capital fund.

The GRF will help to drive Cleveland Clinic’s goal to reduce energy intensity by 20 percent by 2020. Through the end of 2015, Cleveland Clinic had reduced its energy demand by 12.3 percent across its 20 million square feet of facilities compared with a baseline year of 2010.