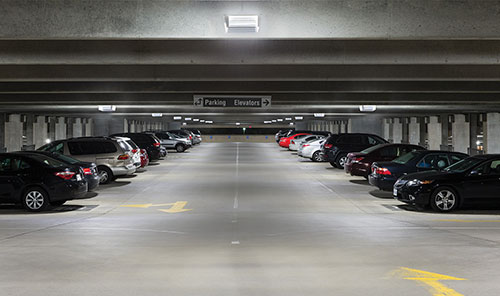 Reston Hospital is expecting an 81 percent reduction in annual energy consumption after switching to LED in its parking garage.

The system comprised more than 300 metal halide fixtures – 175-watt bulbs burning 24 hours a day, seven days a week – reaching heat levels that would often melt the globes. The material and labor costs of replacing five to 10 globes and 30 or more light bulbs a month were significant, Cooper says. The task took an entire day to complete.

“The material and labor costs of replacing five to 10 globes and 30 or more light bulbs a month were significant, so we were looking for an opportunity to address the issue while enhancing the visibility, safety and comfort for our patients, visitors and staff,” Cooper says.

He and Jim Sweeris, director of plant operations and security, evaluated their options and decided to install LED lighting from Cree Inc., Durham, N.C., to provide the solution that improved lighting quality, while providing energy and maintenance cost savings.

They’re glad they did. Reston Hospital Center anticipates an 81 percent reduction  in energy consumption equal to an annual $60,455 in savings, plus additional savings on maintenance. In going all LED, the hospital received a rebate from utility Dominion Virginia Power.

The project involved a total of 325 fixtures, including pendant-mount LED luminaires throughout the parking garage, area lighting on the roof parking deck and surface ambient fixtures in the stairwells.

Properly lighting parking garages is a challenge, and the LED luminaires offer low-glare illumination with high energy efficiency and quick payback of about two and a half years. Cooper calls the LED area luminaires on the upper level the most impressive lights he’s ever seen.

“We previously had 1000 watt lights up there, and we had dark corners and shadows,” Cooper says. “Now, it could be two in the morning, and you can see anything in any area up there. The dissipation of the light is excellent. The color is great. And you can look up toward the light and it’s not going to blind you. It’s a great improvement to that top deck.”

The product chosen for the stairwells brightens that space significantly, he says. “It’s a different quality of light; everybody is very pleased with them,” he says. “And, of course, they’re not that old, bulky-looking light that’s hung on the wall. It’s just a very nice looking light fixture.”

In addition to now having sharper, crisper light, Cooper likes that the new system can be programmed from full brightness down to 10 percent. They’re also motion controlled, with many of the lights shut off entirely during daylight hours unless needed, a feature that saves electricity.

When one light series picks up motion during the day, they come up to 25 percent brightness. At night, they stay at 15 percent, then come up to full brightness when needed.

The system also provides enhanced security in the garage. There’s no longer glare around the wall-mounted cameras and they offer improved visibility when officers are patrolling.

“Their input has been positive,” Cooper says of the security team. “They like it. They claim that no matter where they are, once they get within 30 feet of a light, it comes up to full brightness at night, in all areas.”