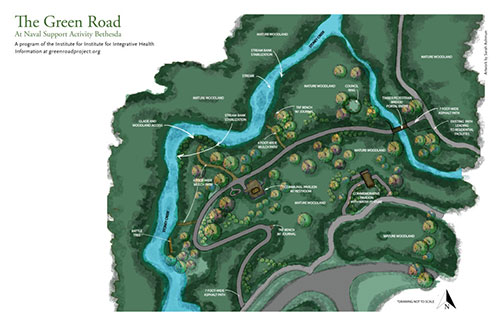 This map shows the layout of the two-acre wild garden used to heal patients with PTSD.

Photo courtesy of the Institute for Integrative Health

The Green Road project located at Naval Support Activity Bethesda, home of Walter Reed National Military Medical Center, is a prime example of using the least invasive means to heal patients. The two-acre woodland healing garden is is an initiative of the Institute for Integrative Health, an independent nonprofit organization. Frederick Foote, a retired U.S. Navy physician who helped to found Walter Reed's Healing Through Arts program that began in 2000 is project director for the Green Road. His work with the Healing Through Arts program focuses on using holistic care as a way to treat post-traumatic stress disorder (PTSD) in active-duty military personnel. Over the years, his work has taken the form of visual, musical and language arts and now, through the Green Road Project, has extended outside of the a hospital's walls to measure nature’s healing effects.

The project encompasses a half-mile-long Americans with Disabilities Act-compliant green corridor that links to the hospital campus. A stream surrounded by woodland runs through the middle of the project and connects the campus to two on-site military housing complexes. Access points along the wheelchair path link to a pavilion called the Social Zone, where the medical center can host small groups. On one hillside sits the Sacred Commemorative Pavilion. But for all that this project includes, those who have worked on it for the past 10 years say that the secret to its healing will be what the project is not.

“What sets the Green Road apart is that most healing gardens are respite or rehab gardens and very manicured; this is different because it’s a wild garden and it’s an effort to heal with wild nature,” Foote says. “We’ve changed it as little as possible. In focus groups, we asked our Wounded Warriors: What are the most powerful elements for you? They told us water, stones, trees and animals. All of the construction has been to enhance and bring out those four things in ways that are more visible and powerful.”

The project’s minimally invasive construction is evident throughout the garden, even if that meant the final project ended up being something different from what was initially devised. For instance, a 9/11 memorial naturally emerged near the stream. Tree roots had intertwined with metal railings from an abandoned streetcar line. Digging up the rails would mean more obstruction of nature than what was planned for and taking down trees that soldiers had already deemed precious. Instead, the team erected a wall around it that many patients have been placing white stones around when they visit.

Now that the project is complete, Foote says that the research of its effectiveness can begin. Through language analysis, genomics, monitoring the four signals of stress and other measurements, the Healing Through Arts team will track the impact of the wild garden on reducing PTSD. Some of the data collection has already begun through language analysis as soldiers write entries in public journals placed at the garden. Much like the project itself, Foote says whatever the researchers find in their data collection will dictate future decisions.

“This site directed us much more than we directed the site,” Foote says. “You can go there and talk about what you see, but the impact expressed in words is beautiful because nature made it happen. It’s got a special kind of magic that we may never nail down.”

Program puts nature in the center of its design