Indiana (Pa.) Regional Medical Center (IRMC) continues to save about $225,000 annually on energy consumption after its facility staff analyzed central plant and mechanical system operations and made changes to improve efficiency. 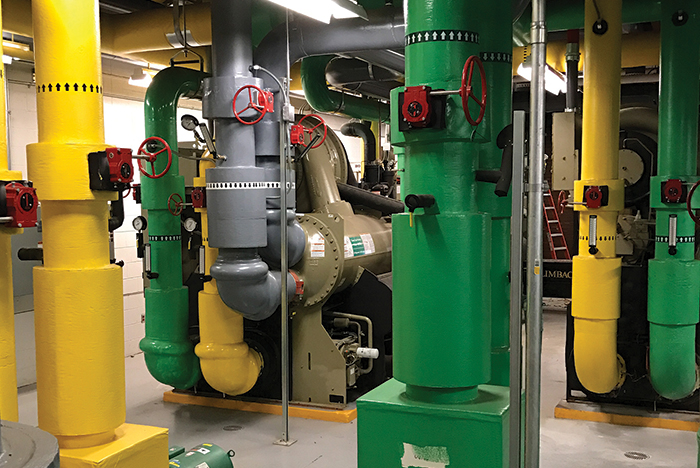 The new 500-ton variable-frequency-drive chiller (background) increases the efficiency of operations at the new central plant at IRMC.

The key is never to stop looking for improvement because change is constant, Ziemer says. “You can’t do one thing and sit back and say you’re done. It’s continuous because things are always changing. Every time you add a piece of equipment, you go through the same learning curve and commissioning process all over again,” he says.

Ziemer’s first step was to hire an energy consulting firm to commission the central plant and worked outward from there to the mechanical equipment serving the hospital to identify and prioritize the inefficiencies. He then partnered with a national mechanical contractor firm to fix the worst problems.

One of the first issues they tackled involved the chilled water system, which was improperly recirculating water in the primary loop. Piping in the central plant and hospital was reconfigured so that water would not circle back to the central plant before reaching cooling coils and satisfying the hospital’s load, Ziemer says.

In addition, three-way chilled water control valves were converted to two-way valves to eliminate the inefficient mixing of supply and return water while reducing pumping loads. IRMC eliminated 6 to 8 degrees F in cooling loss through the steps taken.

The main patient tower had been a source of continuous complaints about high air temperature and humidity. Ziemer’s team installed two 26,000-cubic-feet-per-minute, 7.5-horsepower fans on the return side of the system, which improved air-handler efficiency and performance when in the economizer mode of operation.

IRMC uses a large number of radiant cooling/heating units, which the team recognized were losing a lot of efficiency and energy because of hot and cold water mixing. Variable-frequency drives were installed on pumps to balance the hot and cold system hydraulic pressures. This eliminated the cross flow from the hot system to the cold through the radiant units.

Ziemer and his team also created a continuous commissioning process to address system problems as they occurred and to prevent temperatures from drifting outside programmed parameters.

The American Society for Healthcare Engineering of the American Hospital Association recognized IRMC and other hospitals in 2015 for cutting energy consumption.

St. Vincent Medical Center's cooling tower upgrades result in a 30 percent cut in water use and $76K in yearly savings.