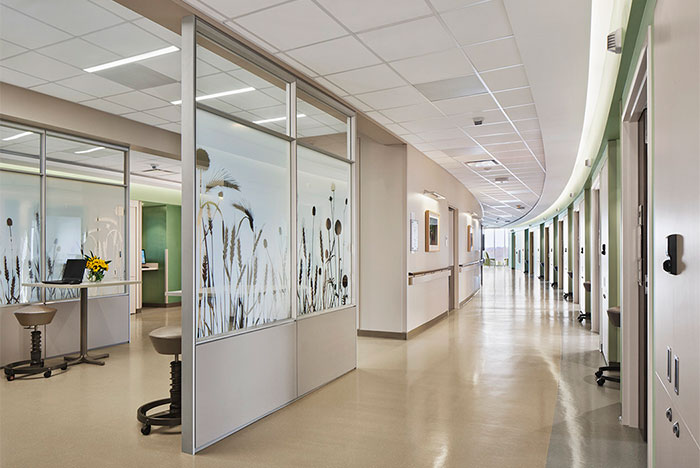 A collaboration hub located near patient rooms at SSM St. Mary's Hospital provides a space for nurses, physicians and other clinicians to gather and coordinate care.

Photo courtesy of The Lawrence Group

Despite all of its benefits related to patient privacy, infection control and healing, the two-decade-long transition to single-occupancy patient rooms in U.S. hospitals has had a few drawbacks. Twenty years ago, patient rooms averaged 550 gross square feet per bed on a nursing unit. Today, it’s more like 850 square feet, which increases walking distances and makes it harder for nurses to keep an eye on patients. One of the most popular solutions to this issue has been the decentralized nursing unit, the idea being that by placing nurses closer to the patient’s bedside, hospitals can eliminate visibility issues and keep care quality high.

But does it actually work? That’s the question faculty and students at the Institute for Health + Wellness Design at the University of Kansas (KU) School of Architecture, Design & Planning are attempting to answer through a new study. In 2014, the team was contracted by architecture firm Lawrence Group to complete a post-occupancy evaluation (POE) of the renovated orthopedic unit at SSM Health St. Mary’s Hospital–Jefferson City (Mo.). The results would give the health system valuable insight before embarking on a renovation of its sister hospital SSM Health St. Joseph Hospital–Lake Saint Louis (Mo.).

The POE showed that patient satisfaction scores increased in all categories except one.

“In looking at the patient surveys that were completed after the occupancy of the new unit, we picked up on an unusual finding relative to the drop in the perception of timeliness of the nursing staff, and it sparked an interest on our part in looking at … how the unit actually was running and were the remote stations being used as anticipated,” says Kent Spreckelmeyer, FAIA, professor in the architecture school.

Hui Cai, assistant professor of the health and wellness program at the school of architecture, who has been leading the study, hypothesizes that although decentralized units place nurses closer to patients, they may unintentionally isolate them from other staff, making it harder for nurses to get questions answered and delaying care as a result.

The research team at KU, which includes faculty and students, is back at St. Mary’s for Phase 2 of the study, which began last year. They’ve also pulled in another hospital, the University Medical Center of Princeton at Plainsboro (N.J.), to add to its data set. The team has developed a multistep methodology, which includes a one-week ,on-site observation to conduct behavior mapping and tracking of both new nurses and experienced nurses. The research also involves a 30-question, three-part survey that asks nurses about their own identifying information, their perception of the unit’s design and the nurse station in particular, and their perception of teamwork and job satisfaction. So far, the team has received more than 200 responses between the two hospitals.

“One of the comments I’ve heard during interviews with the nurses is that ‘we’re human. We’re not machines,’” Cai says. “They need that human contact. They need to talk with their peers, even if it’s just to vent. It’s necessary for a better working experience.”

Frank Zilm, the institute’s chairman, says the study will offer valuable insight in a design world that focuses a great deal on efficiency and desires more evidence-based research to make better decisions in planning and facility layout.

“There’s been a lot of really valuable work done in applying Lean techniques to design and I think that’s all valuable, but I think perhaps we may be focusing a lot on counting steps and walking steps and, perhaps, not being sensitive to the support needs of the staff who are working on the units and the apparent need for collaboration among the team members,” says Zilm.

Zilm adds that the only way to gain a clearer understanding, however, is to widen the research. As St. Joseph renovates areas of its hospital, it will have a mix of decentralized nursing units as well as centralized units, giving the research team a better controlled environment in which to compare designs and measure feedback. The team is also talking with the Downers Grove, Ill.-based Advocate Health Care system to potentially research its units. Partnering with more hospitals and researchers not only will give the team a larger data set, but also a larger data set on various types of decentralized nursing units.

“Every time we visit a new system, what they define as a decentralized unit doesn’t look anything like what we just visited at another hospital,” Spreckelmeyer says.

Cai adds that decentralized units may also work better in certain environments. For instance, she's found that nurses in intensive care units may have more difficulty with the model than those in med-surg departments. The nuances of what works and for who brings even more complexity to the study.

"We’re actually preparing a roundtable discussion and we are trying to recruit more designers and more hospitals into the discussion," she says. "We would like to further expand the hospital size that we study and maybe gather more floor plans so we can start comparing different typologies of decentralized nursing stations and come up with a better definition and classifications of decentralized nurse stations. We are in the middle of analyzing some data, and hopefully we will report some of the data by the end of this year and publish in an academic journal."

NIHD says nurses are an underutilized resource in health care planning and design.