Not your father's energy management system 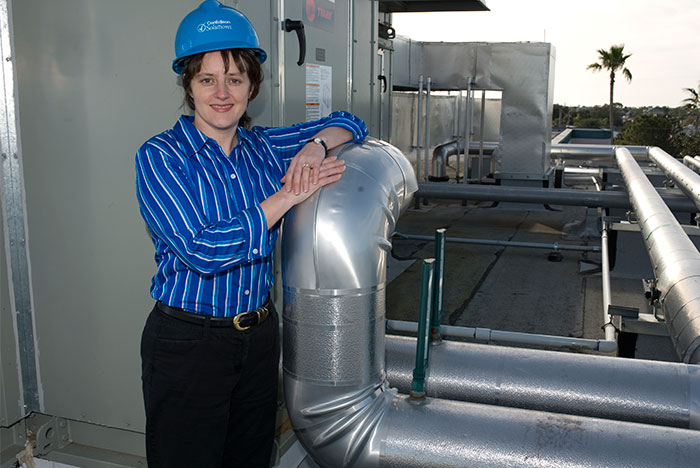 Elena Ress, a senior engineer with ConEdison Solutions, services a rooftop chiller atop a Florida hospital.

The typical chief financial officer (CFO) of a hospital isn’t an expert in energy-management systems, and almost certainly is not keeping tabs on the latest in chiller or boiler technologies.

So, let’s say this typical CFO knows that the facility’s chillers have a 23-year life span. That should make things simple, right? The CFO adds a tickler to his or her calendar to start the process of replacing the chillers toward the end of their useful life.

But in fact, waiting 23 years could be a big mistake and possibly turn out to be a major waste of money because of operating inefficiencies. In addition, waiting too long may violate updated codes related to current refrigerant guidelines and associated safety requirements.

So, whose job is it to make sure hospitals avoid errors like this?

That job goes to the health care facility manager with assistance from the manager overseeing the facility’s energy systems. And when it comes to a hospital’s chillers and boilers, the fact is that most institutions are still using “their father’s” chiller and boiler systems.

Today, many hospital chiller and boiler plant systems are comparatively inefficient when judged on the basis of their energy efficiency and operational effectiveness. When chiller and boiler plants — and the control systems facility operators use to operate these systems — are technically behind the times, this translates into operational inefficiencies, a waste of energy and, most importantly, a waste of money.

Energy managers need to explain to their CFOs that because of new energy technologies, changes in hospital usage patterns, and other dynamics, it’s time for most hospitals to strongly consider three key upgrades, if they haven’t already done so: variable primary flow (VPF) chilled-water systems, decentralized boiler systems, and a properly designed and applied automated energy management and control system.

All three changes will require significant new investment, especially the chiller and boiler upgrades. However, that’s not to downplay the investment that goes into a properly designed and applied automated energy-management system. All too often, these systems as implemented are overly complex, and an owner can pay dearly for this unnecessary complexity. Energy managers must be ready to build a strong case that these changes will be vital to maintaining the comfort and safety of patients, personnel and visitors while also reaping long-term cost savings while improving the health care physical environment.

Early chilled-water plant systems simply provided a constant flow of chilled water throughout an institution. This technology then gave way to primary-secondary configurations which gained in popularity from 1980 to 2010. Under such systems, chilled water flowed from a primary plant-side loop serving the building or outbuildings via a decoupled, secondary piping distribution system.

But today, the most desirable design is a VPF chilled-water system. VPF systems typically consist of multiple chillers and multiple pumps. They improve water-flow distribution, save energy and money by varying chiller flow through the chiller evaporators. This way, hospitals can optimize the use of chilled-water pumping systems by supplying only the amount of chilled water needed at any one time to satisfy the building’s cooling load.

One major payoff of a VPF system is that it allows systems to function at a high delta T (∆T), which represents the difference in water temperature between water being supplied from a chiller plant and the water returning to it.

The higher the ∆T, the less pumping energy needed. This can save a lot of money and also allow for the downsizing of piping and the elimination of pumps. It also can present opportunities to scale back electrical and ancillary systems and equipment overall.

Another major factor propelling hospitals to upgrade chillers is the regulatory phase-out of hydrochlorofluorocarbons (HCFCs) because of their harmful effect on the atmosphere. Federal and state rules are requiring chiller manufacturers to use alternative refrigerants. Current codes require that specific leak detection and ventilation systems be installed that can detect and exhaust refrigerants in the case of a refrigerant leak. Codes also may call for the placement of a wall to physically separate the boiler plant from the chiller plants.

Manufacturers can retrofit an existing chiller to use the new refrigerants, but switching the refrigerant typically diminishes chiller capacity and efficiency. These manufacturers can be expected to remind hospitals of this loss of capacity, in part because they are always happy to sell new equipment. The energy manager should carefully weigh the pros and cons of upgrade vs. replacement. Whatever the choice, many regulations still are moving to phase out HCFC.

Deciding on decentralization of boiler plants 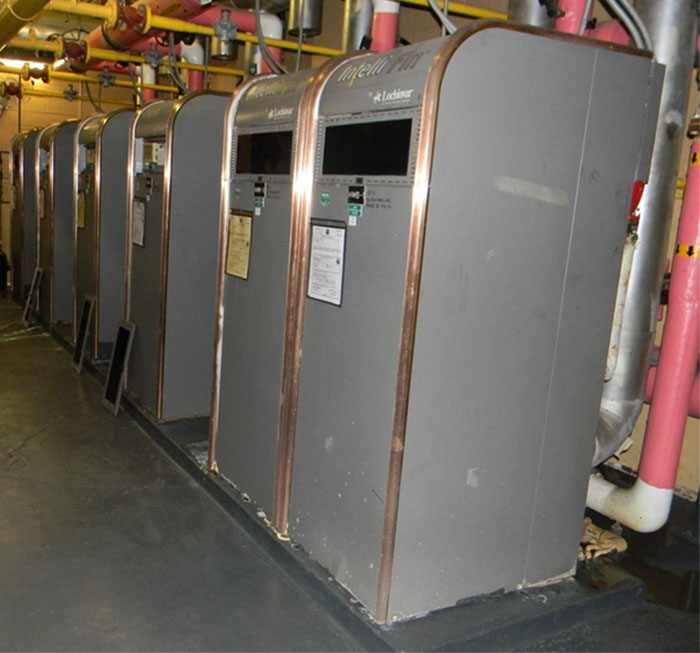 Some benefits of a decentralized boiler system could include increased efficiency, improved safety, and lower repair costs.

Boiler plant decentralization is a smart way to meet contemporary steam load needs. Today’s hospitals often consist of multiple buildings along with a medical office building. Instead of housing all steam sources within a central energy plant, a decentralized boiler system simply means that each building has its own, independent, smaller boiler(s) and related systems.

An average large boiler can function for between 30 and 40 years. However, in not understanding the benefits of decentralization, an institution’s CFO may wish to stay the course with the existing central boiler plant until the point when change is absolutely required.

The move toward decentralization of boilers began when hospitals began reducing their appetite for steam. For many years, hospitals operated their own laundries. Hospitals also housed their own medical device sterilizers and kitchen infrastructures. All three would consume large steam loads. But many laundries have been moved off premises, and both the sterilizing and kitchen equipment have become far more efficient, all significantly reducing a facility’s steam loads.

One powerful argument for decentralization is that new technologies have made modern, smaller boilers much more efficient than in the past. New modern boiler technologies can save money and use less energy than an aging central boiler. Additionally, facility steam loads are easier to control with many modern boiler technologies. Plus, with overall steam loads steadily trending downward, many of today’s aged, central boilers are greater in capacity than necessary, which automatically creates inefficiencies.

It’s also getting harder to find qualified operators who know how to monitor and manage large-scale boilers. Historically, many skilled boiler engineers were Navy veterans. But that pool of professionals began shrinking once America’s naval fleet began switching to nuclear power while the fleet itself has significantly downsized from previous levels.

In addition, replacement parts for older equipment can be hard to obtain and repairs are expensive. Redundancy also is limited when the greater-capacity, older boilers go down. In contrast, decentralized systems typically amplify redundancy.

Energy managers need to evaluate based on their system’s needs whether it’s wise to make the case to hospital management to consider decentralizing the boiler system. Investing in a new system could be more beneficial than clinging to an aging and less-efficient central boiler plant solely because of its nominal operational life expectancy.

A properly designed and applied automated system ensures that the institution is keeping pace with technological changes within its operations and its own equipment, whose manufacturers are constantly introducing products that are more capable, versatile and flexible. Automated systems orchestrate the work of these modernized units so that they can be operated effectively and deliver maximum value.

The role of these sophisticated control systems can be compared to that of a band leader, constantly monitoring and ensuring that all energy systems are working seamlessly together and are capable of responding to changes quickly. Automated management ensures that systems are working just the way they should to satisfy the hospital’s needs and are delivering no more or less than what is required.

These new systems also are ideal for the delivery of information. Thirty years ago, most chiller and boiler plants were controlled through the use of analog technologies. Today’s automated systems use a graphical user interface (GUI), coupled with a system of quick-responding and highly precise digital controls. Although, in practice, the use of thermometers and gauges in plants is never discouraged, a GUI — coupled with a system of digital controls — provides an invaluable graphical window into the precise operation of these systems. Operators receive and are able to comprehend vital information more quickly. Data are conveyed in a format that is easier to observe and absorb than when using text-based or analog control systems.

Today’s boiler and chiller technologies offer digital controls that directly interface with central automated systems. Yet, energy managers must avoid over-integrating their systems. This is a common mistake, especially in the face of automation vendors who sometimes oversell integration. Many, if not most, proprietary black box or software optimization programs are not as vital as advertised, and can be costly to implement, especially considering their benefit. This is another big reason why we stress that automated energy-management and control systems always be properly designed and applied.

Energy managers also should properly adjust their personnel needs when it comes to building automation and control systems. Although these systems are designed to be user-friendly, staff will require training on the implemented systems. It’s also important not to duplicate the skill sets of technical staff already on hand.

Most CFOs may not understand chiller or boiler technology. But they all understand the wisdom of a wise and timely investment that serves the long-term interests of their hospital system.

Modern chillers, decentralized boilers, and a properly designed and applied automated management system all make sense as investments. To serve patients and staff alike, energy management professionals are well-positioned and have access to the right information to make that case.

André LeBlanc is director of operations at ConEdison Solutions, Valhalla, N.Y. He can be reached at leblanca@conedsolutions.com.

When HVAC system optimization is not the answer

Not all facilities are created equal when it comes to HVAC system optimization.