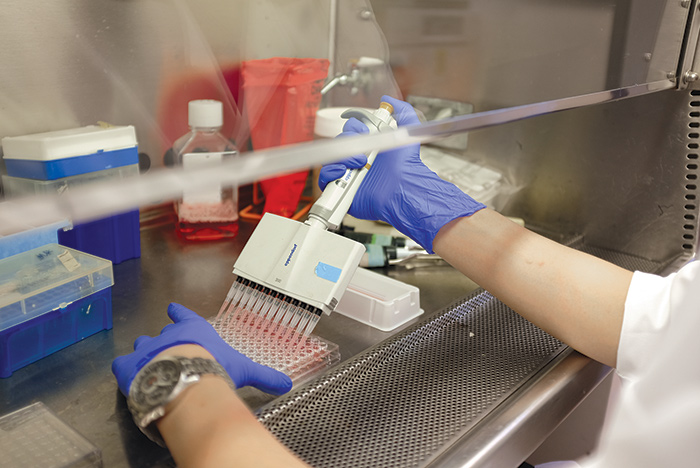 Researchers with the Hospital Microbiome Project sequenced more than 6,500 microbial samples over the course of a year.

A yearlong study mapping bacterial diversity and flow of microbes among patients, staff and surfaces in a new hospital may increase understanding of microbial interactions and ultimately reduce the potential for harmful contact.

The study “demonstrates the extent to which the microbial ecology of patient skin and of hospital surfaces are intertwined and may provide context to future studies of the transmission of hospital-acquired infections,” the authors conclude.

The study, “Bacterial colonization and succession in a newly opened hospital,” began two months before the University of Chicago Medicine opened its new 1.2 million-square-foot hospital, the Center for Care and Discovery, in February 2013 and continued for 10 months afterward. The results were published recently in Science Translational Medicine.

The Hospital Microbiome Project is the largest microbiome analysis of a hospital ever conducted and one of the largest microbiome studies ever, says senior author Jack Gilbert. He serves as faculty director of the Microbiome Center, professor of surgery at the University of Chicago Medicine and group leader in microbial ecology at Argonne National Laboratory near Chicago.

The investigators swabbed each patient’s hand, nostril and underarm, as well as the surfaces patients may have touched, such as bedrails or faucet handles. They collected additional room samples from multiple surfaces, including the floor and the air filter. Each room was cleaned daily, with a more extensive cleaning after each patient’s discharge.

The most obvious change came when the hospital opened. “Before it opened, the hospital had a relatively low diversity of bacteria,” Gilbert says. “But as soon as it was populated with patients, doctors and nurses, the bacteria from their skin took over.”

On a patient’s first day in the hospital, microbes tended to move from surfaces in the patient’s room — bedrails, countertops, faucet handles — to the patient. Starting the next day, most microbes moved from the patient to the room, the study says.

There were two unanticipated findings. First, when the heat and humidity increased during the summer, staff members shared more bacteria with each other. Second, when they measured the impact of treatments — such as antibiotics prior to or during admission, chemotherapy during admission, surgery, or admission to the hospital though the emergency department — the impact was minimal.

“We consistently found that antibiotics given intravenously or by mouth had almost no impact on the skin microbiome,” Gilbert says. “But when a patient received a topical antibiotic, then, as expected, it wiped out the skin microbes.”

The study is not intended to offer a prescription for how to curtail health care-associated infections but, instead, offers a framework for how bacteria move through a hospital, says graduate student Simon Lax, lead author of the study.

“Taking a big picture approach on a macrocommunity scale of how microbes are moving through this environment potentially provides some context for future studies that will focus on a specific organism,” Lax says.

Move marks the opening of new children’s hospital in Buffalo

Managing flow of waste and materials in hospitals