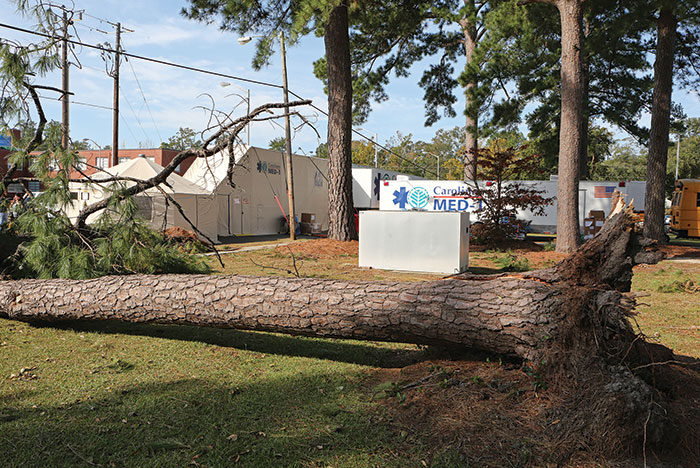 The start of the peak hurricane season is here. That means Carolinas HealthCare System’s mobile emergency department (ED), better known as MED-1, is ready to roll if disaster strikes.

“We can get a call now and be on the road in two to three hours for whatever the situation may be,” says Greg Miller, nurse manager, Carolinas MED-1.

Believed to be the first of its kind and one of a few worldwide, the mobile hospital and ED is designed to care for sick or injured patients at a disaster almost anywhere in the continental U.S.

A recent example includes deployment to Lumberton, N.C., in October 2016 when Hurricane Matthew hit the coast and more than 200 patients were treated.

“Instead of transporting large numbers of patients and overwhelming hospitals, Carolinas HealthCare System can bring a hospital to the patients,” Miller says. MED-1 staff will stabilize critical patients before sending them to local hospitals if they require acute care and treat less serious patients on-site, he says.

The mobile hospital is equipped with a digital X-ray and other equipment, lab, pharmacy, seven acute care beds, four intensive care beds, a two-bed operating room and a dental chair. Supplies and equipment travel in a separate trailer.

A tent can be set up to provide an additional 100 beds. “We travel with enough medical equipment and supplies to care for patients for 72 hours without needing any backup or resupply,” Miller says.

The complete Carolinas MED-1 fleet includes a shower/laundry truck and vehicles for repairs, towing and staff transport. The mobile hospital can be fully operational within 45 minutes of arrival. 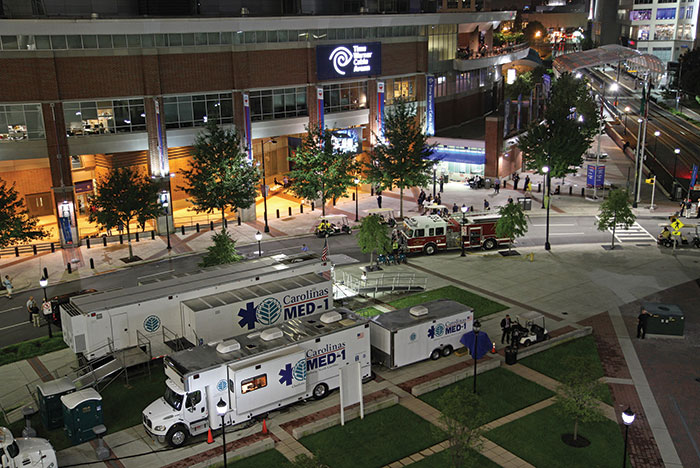 Since Carolinas purchased MED-1 about 13 years ago, its use has expanded. It was deployed at Grove Hill (Ala.) Memorial Hospital for seven months in 2016 to provide emergency care while the hospital’s ED was undergoing renovation.

The unit has been deployed as far away as Phoenix, where it provided care to 885 patients for three weeks while a hospital ED was being renovated. For  seven weeks, it was deployed in coastal Mississippi following Hurricane Katrina in 2005, and treated about 7,500 patients.

The unit also provides such nonemergency care as flu shots and free dental services and has been present at events like the Democratic National Convention in Charlotte in 2012.

Mt. Ascutney Hospital and Health Center’s health IT initiatives have landed it on this year’s Most Wired list