Active surveillance and decolonization combined with a strict environmental services (ES) regimen contributed to the reduction, according to the study’s lead author, Lanette Hughes, R.N., infection preventionist at the CLC. At an estimated cost of $28,000 to treat each MRSA infection, researchers projected that the initiative saved roughly $2.2 million by preventing an otherwise expected 64 infections over the study period of 2013-2016. 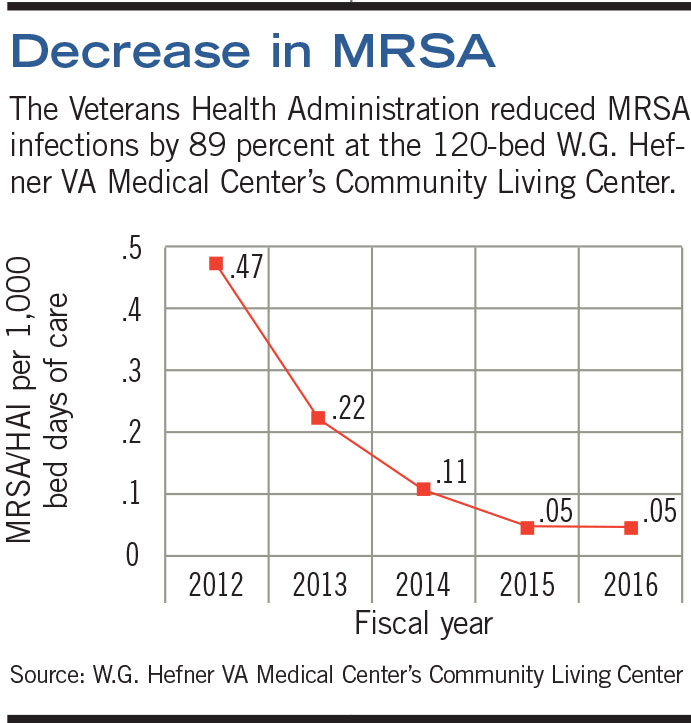 Results of the research were presented at the Association for Professionals in Infection Control and Epidemiology’s (APIC’s) 44th annual conference in June. “This research shows the positive impact that targeted infection-prevention interventions can have on patient safety and health care costs,” says Linda Greene, R.N., president of APIC.

The aggressive intervention was put into place after a previous attempt to stop the spread of MRSA in 2007 proved unsuccessful. That effort relied on contact precautions — isolating colonized residents, using dedicated medical equipment for each resident and requiring health care workers to don gowns before entering rooms.

Despite implementing the strategies, the prevalence of MRSA colonization climbed to 70 percent of residents and 19 MRSA infections by 2012.

Hughes explains that each year an estimated 30 percent of the CLC’s admissions are already colonized with MRSA; the center is a long-term residence for many and a permanent home for others.

The increased colonization rate led researchers to consider taking actions over and above contact precautions. Beginning in 2012, the CLC staff began testing all MRSA-negative residents and then decolonizing all known positives, plus everyone who tested positive at that time for five consecutive days. Decolonization consisted of daily chlorhexidine bathing and the use of intranasal mupirocin ointment.

In addition to the decolonization, ES staff performed daily terminal cleaning of each resident room, bathroom and all common areas, including utilization of ultraviolet C (UVC) light for added control of the environment. Wheelchairs, walkers and scooters also were cleaned daily and treated with UVC light.