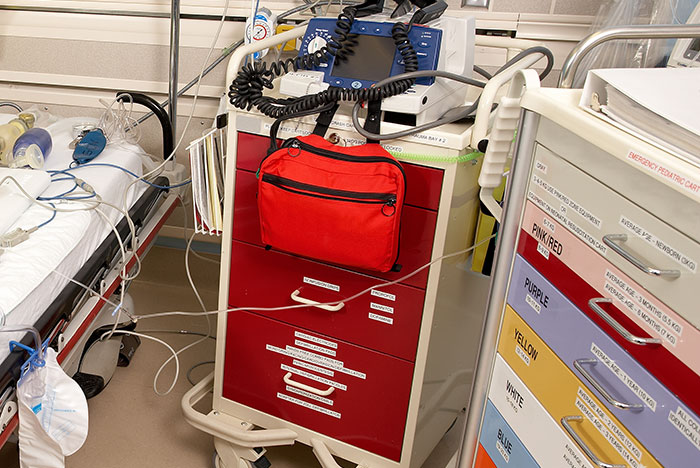 A work group was formed in July to discuss the problem of overheating batteries on medical carts.

The Association for the Advancement of Medical Instrumentation (AAMI) is working with a number of health care systems, battery makers and others concerned about why medical cart batteries have overheated and sometimes caught fire.

After conducting a survey of hospitals in 2016, the Food and Drug Administration (FDA) acknowledged that a small number of hospitals reported problems with medical cart batteries. But the units are safe to use, especially if they are maintained properly and batteries are replaced on schedule, the FDA says.

“We’re not saying, ‘Don’t use them,’ but pay attention to them as you would other medical devices that you use,” says Iacovos Kyprianou, senior science health adviser of the FDA’s Center for Devices and Radiological Health, about the battery-powered medical carts.

The work group was formed after a meeting in July attended by 34 representatives from AAMI, hospitals, battery and medical device manufacturers, the FDA and others to discuss the problem.

The group will “look at the problem and determine what can be done to improve the situation and begin thinking about who is responsible for improving the situation,” says Joe Lewelling, vice president of emerging technologies and health information technology, AAMI.

The scope of the problem is unknown, and the work group will try to determine the number and severity of incidents that have occurred, Lewelling says.

According to the FDA survey conducted in 2016, half of a small sample of hospital respondents — 14 out of 28 — said they had experienced a cart battery or electrical-related problem during the previous two years.

While it cautioned that the limited survey size was inconclusive, the results prompted the FDA to warn facilities about the potential safety risks associated with battery-powered mobile medical carts.

“The FDA is aware of reports of explosion, fires, smoking or overheating of equipment that required hospital evacuations associated with the batteries in these carts,” agency officials wrote in a letter to health care professionals in December 2016.

Kyprianou says the FDA became aware of isolated incidents as far back as 2013 and started to monitor the situation. He says the FDA has encouraged hospitals to take the proper steps to prevent factors that may contribute to problems.

Ensuring that medical carts conform to voluntary safety standards such as IEC 60601-1, IEC 62133 and UL 2054; proper maintenance; and replacing a battery when recommended by the manufacturer are critical, he notes.