Army hospital goes above call of duty in sustainable design 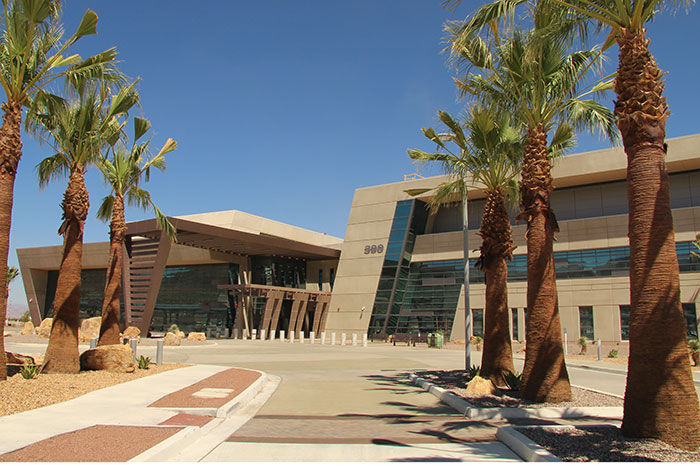 The National Training Center in Fort Irwin, Calif., went above and beyond the call of duty in building the new Weed Army Community Hospital.

Since 2008, the Army has required that all newly built facilities and major renovations achieve LEED Silver certification. However, facilities can aim for a higher certification as long as no additional costs are incurred. When Weed Army Community Hospital set out to replace its 50-year-old facility in 2010, it set its sights on building not only to LEED Platinum standards, but also a carbon-neutral hospital with a net-zero energy output. The hospital broke ground in 2012 and opened its doors to patients in September while reaching its threefold sustainability goal. Those affiliated with the $211 million project have dubbed it “the greenest hospital in the world.”

“Though historically difficult for hospitals to achieve this, given their high energy consumption and the additional building codes required for patient comfort and safety, at 82 [LEED] points, the new Weed Army Community Hospital [is] the third hospital in the world that achieved LEED Platinum,” says Maj. Jeffrey Beeman, PE, LEED Green Associate, and member of the Society of American Military Engineers.

For instance, the three-story hospital’s horseshoe shape and clerestory windows allow daylight to reach up to 90 percent of occupied spaces. This reduces demand on its lighting system, which is fitted with occupancy controls. The buried first floor promotes a natural insulation, and the solar water-heating system provides 65 percent of the building’s domestic hot water needs.

The community hospital’s 5-acre, 2.4-megawatt fixed-panel solar array provides the majority of the renewable energy powering the hospital, outpatient clinic and central utility plant through three separate feeds. Any excess power generated is distributed throughout Fort Irwin. The renewable-energy system is expected to reduce Fort Irwin’s energy costs by $700,000 and also accounts for its reduction in carbon emissions. Weed Army Community Hospital will reduce annual greenhouse gas emissions by 3,925 metric tons. With energy savings accounted for, the system has a simple payback of 12.6 years.

“To guarantee solar performance, the energy produced and consumed throughout the first year will be monitored and adjustments recommended to increase efficiency,” Beeman says.

Other sustainable measures include:

The building of a net-zero hospital

Weed Army Community Hospital's sustainable design goes above and beyond the call of duty.