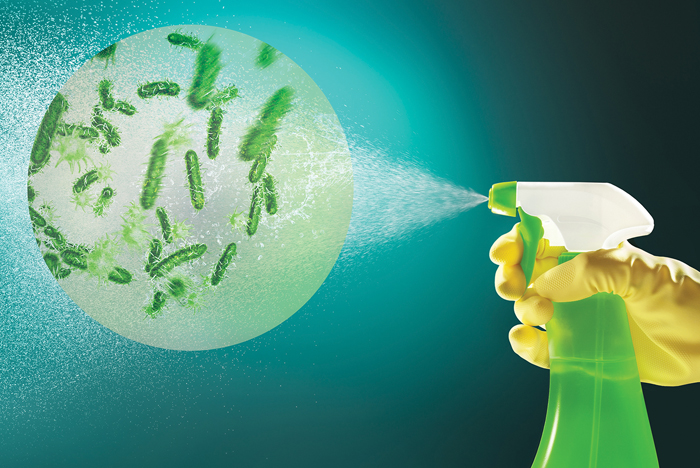 The EPA is tasked with ensuring that products are safe and effective at killing targeted organisms.

Under the Federal Insecticide, Fungicide and Rodenticide Act, the Environmental Protection Agency (EPA) has jurisdiction over the registration, labeling, sale, distribution and use of pesticidal products that include noncritical, hard-surface disinfectants used every day in hospitals.

The EPA is tasked with ensuring that the products used to kill bacteria, viruses and bacterial spores on environmental surfaces are safe for use and effective at killing the targeted organisms on a label. The Antimicrobials Division (AD) and the EPA’s Microbiology Laboratory of the Biological and Economic Analysis Division (BEAD) at the Office of Pesticide Programs (OPP) work together to develop guidance documents on appropriate and standardized laboratory testing of disinfectants.

They utilize methods from standard-setting bodies like ASTM International and AOAC International, partner with stakeholder laboratories, and run efficacy ring trials and sophisticated statistical packages to develop or improve the standards for hard-surface hospital disinfection.

The EPA has been busy the last few years refining and updating laboratory methods and adding new techniques to the menu of options for registrants and end users. The EPA’s focus has been on health care environments and the organisms or challenges faced in these use sites.

In March 2017, for instance, EPA’s AD and BEAD released a new guidance document detailing the methodologies and data requirements for registering claims against the emerging pathogen and multidrug-resistant Candida auris. The following August saw the release of methods and registration guidance for claims against biofilms of public health importance. In February, both guidance on laboratory testing of disinfectants with Clostridium difficile claims and the overarching microbial efficacy guidelines were updated.

Among these changes are the following alterations to the EPA’s testing guidelines:

The suspension of the program does not mean that disinfectants on the market are not being scrutinized by the agency. In fact, the EPA continues to review product-specific data of existing products through the reregistration process, ensuring that data substantiating both safety and efficacy are meeting current standards. The EPA is actively engaged in the development of a risk-based testing strategy in response to the OIG recommendations. This proposed strategy will help to ensure the effectiveness of public health pesticides used in hospital settings by:

The EPA is expected to release this strategy in November.

In addition to changes to overall testing programs, the following guidances for specific challenges have been issued:

The EPA continued to work on improvements to available methodology and embarked on a multilab collaborative study to optimize and standardize spore preparation. Having standardized spore material to test a sporicidal disinfectant is paramount to reliable data.

Depending on the growth and handling of biological systems such as C. difficile, spores of varying robustness can be created. For a method to be used as a valid regulatory tool, the standardization of spore preparation ultimately leads to a level playing field where all disinfectants are subjected to the same challenge across laboratories.

The microbiologists of the EPA included a robustness test to qualify spores based on the spores’ tolerance to a standard bleach treatment. A draft guidance document was released in 2017 detailing method changes in addition to new testing and labeling requirements for disinfectant manufacturers. There were some challenges made to method details and to some of the labeling language used in this draft. Of importance to infection prevention specialists was the deletion of wording related to high-touch objects in a cleaning regimen.

The EPA worked with stakeholders to adjust parts of the guidance and reinstated language on high-touch surfaces. In February, the EPA released a final guidance that includes a mandatory addition of simulated bodily fluid, an addition welcomed by public health stakeholders and some flexibility in the types of materials used as model surfaces for testing products.

The C. difficile test method is a basic quantitative carrier-type test method in which a drop of spore material and simulated soil are dried on a stainless-steel carrier and treated with a disinfectant. After the desired contact time, the chemistry is neutralized and survivors are quantified. The performance standard remains at a minimum of a 6-log reduction of spores and must be achieved with three batches of product on three separate days. Environmental services professionals should be aware that towelettes with C. difficile claims are not tested using a “wiping” method, but rather the liquid from the towelette is expressed and used in the method described previously. In addition, registrants must prove that their towelettes can keep a surface wet for the contact time listed on the label.

Future work by the EPA

The effectiveness of EPA-registered products in the health care environment continues to be an important priority for the OPP.

Stakeholders may expect to see draft 810 guidelines on water and sanitizers, a new towelette test method, and alternative quantitative disinfectant methods all released for public comment in the near future.

The BEAD microbiology lab also has hinted at an upcoming laboratory-based workshop on antimicrobial test methods.

Elaine Black, Ph.D., is senior regulatory manager for Ecolab. She can be reached at Elaine.Black@ecolab.com.

How to stay updated on regulatory changes and play a role in their outcome.

Requirements governing an important tool in the fight against health care-associated infections.