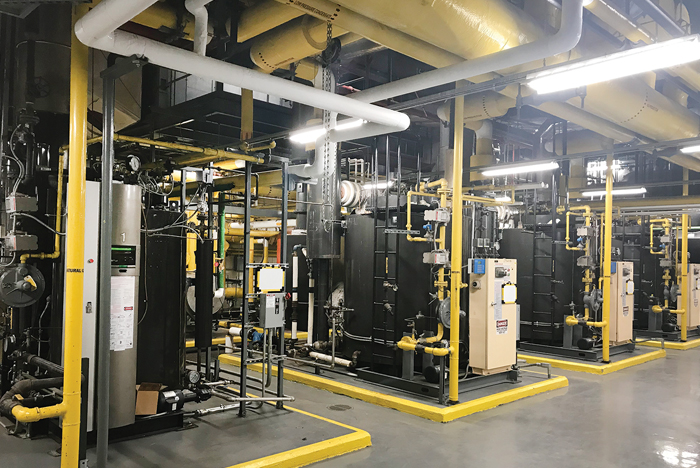 Greenwich Hospital, which was the first U.S. hospital to choose Miura steam boilers, is now updating its facilities with the company’s latest technology.

In 1997, when Greenwich (Conn.) Hospital broke ground on a new building, the plan was to build it in two phases, a concept that meant rethinking the installation of two large steam boilers.

Instead of the two large boilers that were part of the original plan, the hospital chose to purchase seven Miura EX-200 SGO Gas/Oil Series high-pressure steam boilers.

Now, more than 20 years later, the hospital has begun to replace its boilers with the latest technology from Miura.

“We replaced the two EX-200s from our original seven with EX-100s,” says Slusarz. “The main reason was that on the days when we’re really not utilizing a large amount of steam, it gives the operator greater options. Plus, our boiler room is designed with two rows of boilers — three on one side and four on the other. This gives the operator a chance to shut down one whole side for maintenance, and still have redundancy on the line.”

Miura’s steam boilers, made in the company’s Rockmart, Ga., headquarters, gives Greenwich the capacity it needs for sterilization, heat, hot water, humidification and other requirements, while using less fuel and producing fewer emissions.

Available in 100 horsepower (HP), and in 50-HP increments up to 300-HP models, the EX Series utilizes vertical water tubes in a circular array. Both headers of each series are encased in a castable refractory with only the tubes exposed to flame and/or combustion gases. The upper header is attached to the lower header only by the tubes. As the tubes expand and contract, the headers float up and down accordingly.

Slusarz says the boilers allow the hospital to quickly adjust operation depending on demand.

“Efficient operation is critical,” Slusarz says. “The hospital’s steam demand fluctuates throughout the day so, sometimes, we’re only doing 1,000 pounds an hour, and we can quickly go up to 8,000-to-9,000 pounds an hour. Plus, with multiple Miura boilers, we are able to have more control on what we are delivering, while minimizing waste.”

Slusarz also says that the hospital continues to be recognized for its green initiatives, and recently took another step forward, going from regular No. 2 heating oil to the ultralow sulfur diesel.

“We dialed in the boilers, which brought our emissions even further down,” he says. “We are running a very clean, efficient plant at Greenwich Hospital.”

Another benefit of the system is its easy-maintenance features. The system’s modular approach makes it simple for the hospital to achieve an N+1 system, a redundancy required for hospitals that enhances overall reliability.

The boilers’ design also helps to simplify inspections. “With Miura, everything is external,” Slusarz says. “You don’t have to remove tons of covers and setup rigging. For our annual inspection, when the state requires us to pull the burner assemblies out, it’s relatively easy.”

While suggesting that a second pair of hands may be needed on occasion, Slusarz says that it is usually a one-person job.

Although the technology has been updated, the hospital is able to maintain the small footprint that influenced its first decision to choose Miura boilers.

“One of the features that stands out with Miura boilers is the compact footprint,” notes Slusarz. “Not only does it save us costly space, but you can walk around these boilers, which is a tremendous advantage.”

The smaller footprint also makes it easier for the hospital to continue upgrading. Greenwich plans to replace at least one of the remaining five boilers each year until the entire system is updated.

“Because we’re a hospital, you can never have enough elevators, bathrooms or closets, so Miura’s footprint is extremely beneficial to us,” notes Slusarz. “When it comes time to replace them, we can get them in and out using simple rigging, versus having to take a whole side of a building out to replace a boiler. That’s a big deal.”