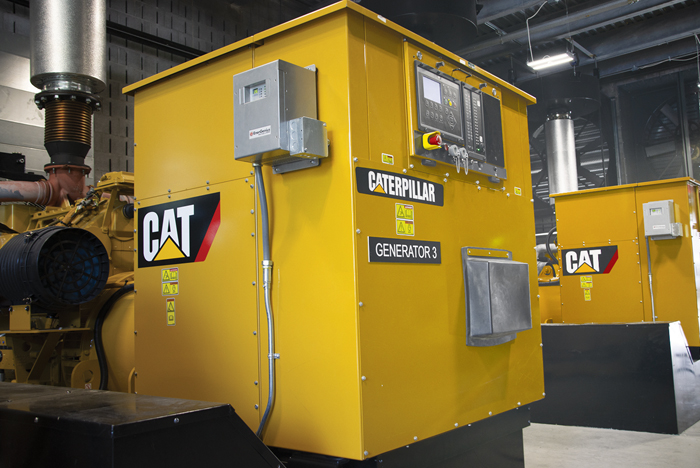 The onboard controls from Caterpillar Inc., Deerfield, Ill., eliminate the need for traditional paralleling switchgear, allowing the system to have a smaller, space-saving footprint. Another benefit of integrating discrete paralleling control devices and programmable logic controllers is a lower project capital cost.

“Mercy Health was looking at all the newest technologies, and it decided that the onboard paralleling system was a way to give them what they needed and still have the reliability and footprint that was required with the space they had available,” says Mark Wild, an account manager with Michigan Caterpillar (Cat), which supplied the generator sets and onboard controls to Mercy.

Four new Cat C32 diesel generator sets were commissioned in late 2016 as part of Mercy Health’s 11-story tower expansion, which will open in phases beginning this fall. The power solution was sized to meet the load of the expanded hospital, replacing two vintage Cat generator sets from the 1970s upon which the hospital had relied for 47 years.

The decision to forgo traditional paralleling switchgear and utilize onboard paralleling was driven by limited space in Mercy Health’s new power building, according to Jerry Booth, environmental care leader for the 267-bed hospital.

“We didn’t have much room to work with here,” Booth says. “We had to build a separate place to store everything, and they helped us with the planning.”

One way to configure power systems by paralleling generator sets is to use dedicated, multifunction engine generator-set controllers with integrated paralleling controls. With the Cat EMCP 4.4 control system, the individual controllers communicate with each other by way of an Ethernet backbone, synchronizing the generator sets through a connection to a single Ethernet switch.

According to Milo Amundson, a veteran technician with Michigan Cat, setting up the multigenerator data link (MGDL) system is essentially a plug-and-play exercise. The generator set control panels are connected by Ethernet cables, and five different parameters are programmed through the MGDL.

“You instantly have all your generator sets communicating together, and then it’s just a matter of establishing your setpoints and programming what you want,” Amundson says.

If communication between the generator sets is lost, the fail-safe adaptive load sharing/droop-operation approach using the EMCP 4.4 control system safely maintains the stability of the emergency power system, seamlessly transitioning into fail-safe mode with gradual, stable movement to a new equilibrium point.

Another advantage of onboard paralleling is the seamless integration that comes from utilizing one equipment vendor for a factory-installed control system. In a traditional installation, the switchgear is often provided by a third-party supplier, requiring additional setup time, site integration and maintenance.

“It represents a cost savings when it comes to preventive maintenance on these generator sets, since they’re all seamlessly integrated with Caterpillar,” says Brian Schiellerd, a product sales and service representative for Michigan Cat.

Steve Turner Jr. is health care market consultant at Caterpillar Inc., Deerfield, Ill. He can be reached at turner_stephen_m@cat.com.