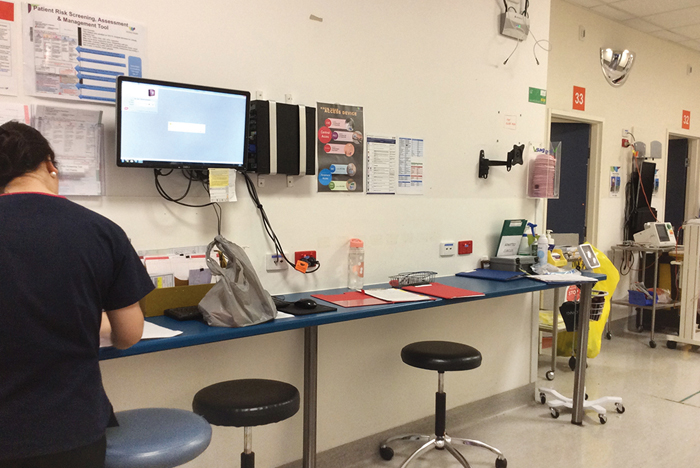 ED staff say that areas such as this staff desk often become safe spaces in which to have informal conversation.

Informal communication between clinical and nonclinical emergency department (ED) staff is a necessary component of collaborative care and, according to a recent study, spatial layouts have an effect on how that communication takes place.

The “Influence of Spatial Design on Team Communication in Hospital Emergency Departments” study, which was published in the Health Environments Research & Design Journal, involved two health systems, each with two EDs for a total of four study sites.

Bernice Redley, R.N., Ph.D., faculty of health, school of nursing and midwifery at Deakin University, lead author of the study, says two of the sites had been redeveloped into EDs, while the other two were purpose-built greenfield sites. They also provided a mix of environmental layouts, such as a traditional square corridor or a pod-style layout. All were set in busy, metropolitan areas.

The EDs typically were divided into small subsections, such as triage, ambulance arrivals, resuscitation, pediatrics and fast-track areas for minor conditions. Redley says a layout that provides visual connectedness across work areas was an important component for staff. The visual openness allowed staff to easily see what was happening across the ED, making them feel more situationally aware and safer by extension.

It had another impact, as well. “This openness meant that staff were always ‘on show,’” Redley says. “This often hindered private or nonpatient-related communication used for ‘comfort talk’ that often involved private or sensitive matters, and is important for staff debriefing and peer support in this busy and highly demanding setting. Staff would go to private locations such as medication rooms or storerooms that were close to the clinical areas for these more private types of conservations.”

Small rooms or spaces that were well-connected to ED patient areas worked best for this type of communication because they offered “visual connection but were acoustically private,” according to Redley.

Study looks into how design affects communication in outpatient facilities

Study says telehealth in the ED can avoid hundreds of transfers

Researchers at The University of Iowa examined 9,000 telehealth visits at 85 hospitals across seven states.