A trifecta of heavy rain, snow and high winds hit more than a dozen states 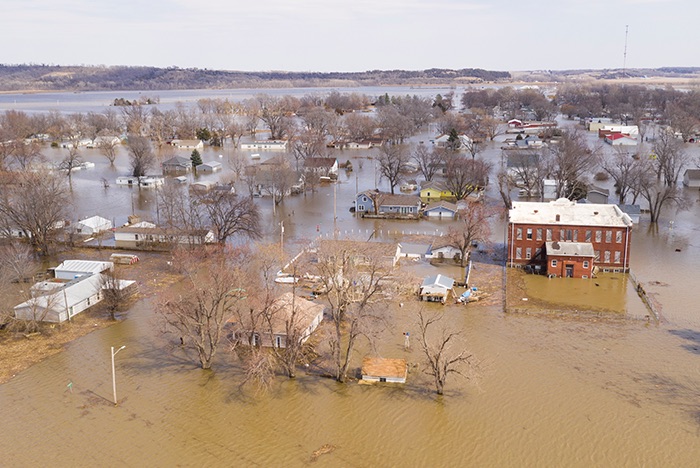 Hospitals, nursing homes and other health care organizations impacted by record flooding in the Midwest in March are still recovering from the disruptive weather event that killed at least four people and displaced hundreds.

Much of the flooding occurred after a bomb cyclone hit more than a dozen states with heavy rain, snow and accompanying high winds. Saturated or frozen grounds prevented excess water from being absorbed, and fast-melting snow and ice also contributed to the weather disaster.

Emergency declarations were issued in several states, including Iowa, Missouri and Nebraska; and several facilities were forced to evacuate, suspend operations and stop admitting inpatients.

“We’re drying out after a minimal amount of water and creek silt was left in the patient rooms on the south side of the hospital for several days,” says Kelly Kalkowski, administrator and CEO of Niobrara Valley Hospital in Lynch, Neb.

The hospital evacuated two patients, closed its doors briefly and temporarily lost power on the first day of the flooding.

“We’re still dealing with the aftermath,” Kalkowski continues. “Patient rooms and hallway flooring will have to be repaired; the total cost to replace all flooring in the hospital is estimated at around $74,000. Of course, it could have been worse.”

At Community Hospital-Fairfax (Mo.), meanwhile, many staff are finding it difficult to get to and from work due to numerous road closures, including Interstate 29, the area’s most important transportation artery.

“What used to be a 45-minute commute for some has now turned into a three-hour commute because so many roads and bridges have been washed out,” says Ann Schlueter, Community Hospital-Fairfax’s chief operating officer. “Some of our specialists who live across the Missouri River actually have to be flown in here to see patients. Our building itself wasn’t physically damaged, but we’re still dealing with the major disruptions the flooding has caused.”

A spokesperson for the Iowa Hospital Association (IHA) said most health care facilities in the state were spared from flooding complications, except for some in the southwest region — like George C. Grape Hospital in Hamburg, which had to transfer some patients to neighboring facilities, suspend inpatient and surgery services, and rely on trucked-in water due to area flooding.

IHA reached out to several hospitals to offer financial assistance; at press time, one had indicated they had about 10 employees financially affected by the flooding. That low number was attributed to the advance preparation and responsiveness of their communities.

Many of the facilities affected say that the biggest challenge involved with this recent flooding event was lack of advance notification, reinforcing the importance of staying prepared.

Schlueter adds that it’s important for facilities to include flooding response and recovery action steps in their emergency operations plan, perform flood response drills and exercises, and address crucial questions ahead of time.

“Which patients need to be evacuated, and how and where are you going to transfer them?” she says. “How will you care for remote home health patients and those with special needs? How can you ensure that supplies and medications will get to your facility? What do you do about staff shortages? These are all important to consider.”

“Our members continue to show that, even in difficult times, they have the ability to shine and rise above,” Beebe says. “The fact that affected facilities were able to so effectively and efficiently evacuate, prioritize services, manage resources and return to operations relatively quickly demonstrates how well trained and prepared they were for a natural disaster like this.”

What health care designers can learn from the retail industry