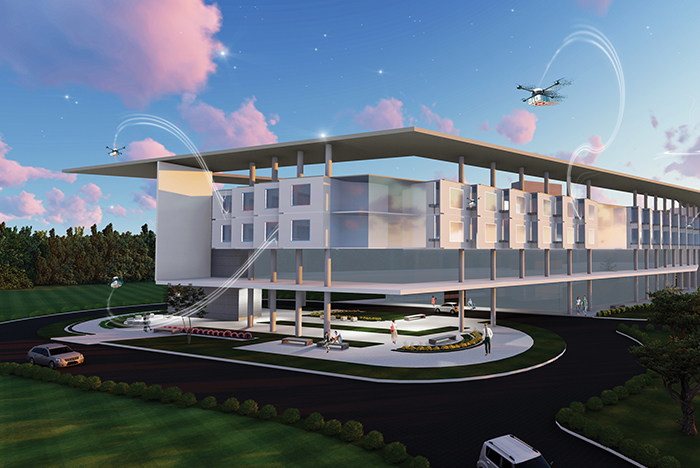 Image courtesy of Leo A Daly

Drones are pushing the envelope in a number of fields, and now health care systems are looking to integrate unmanned aircraft systems into their supply chains as a unique cost- and life-saving measure.

By moving certain expensive functions off-site — such as food service, pharmaceuticals and inventory management — and instead delivering those goods on-demand by drone, hospitals could shrink their footprint by 15% to 17%, predicts Eduardo Egea, vice president and managing principal of architecture firm Leo A Daly’s Miami office.

“Those are areas in the hospital that take up a lot of space and staff and require a lot of infrastructure,” Egea says. “Drone ports liberate you from that.”

The Miami design studio is working on a concept for a drone-powered hospital that would use autonomous aerial vehicles to deliver food and medical supplies directly to patients via a drone port. Egea envisions this port as a valve in the exterior wall of each patient room. On the exterior, a net receives cargo. That cargo slides through the valve to a cabinet within the patient room, from which it is retrieved. The valve is designed to keep out moisture, dirt and other infection-control risks. An exterior electronic system would repel all but those drones that have clearance to approach the facility.

There’s another major advantage to this new system: resiliency. In fact, the idea for the drone ports came to Egea following Hurricane Maria in 2017 when he helped evacuate his parents from Puerto Rico. He saw firsthand patients stranded in the hospital with limited access to food and medication.

“When barges finally began entering the port with supplies, there were still cases where they were unable to get those supplies to those who needed it, including the elderly and critical patients who can’t move from those facilities,” Egea says.

Puerto Rico hospitals still looking to restore full functionality following the hurricanes are intrigued by the concept. Leo A Daly is in discussion with the Hospital Pediatrico Universitario in San Juan to integrate drone ports into the hospital’s patient rooms during its restoration.

“We have seen others delivering medications via drone, but no one has tackled the architectural component as to how to actually deliver [goods] to someone who is inside the building,” Egea says.

Indeed, other systems are testing the logistics of delivery drones. In 2018, North Carolina-based WakeMed Health began test flights in which drones carried simulated medical packages across the Raleigh campus to a main tower at the hospital. In March, UPS began daily revenue drone flights at the campus.

The drones replace courier cars in transporting blood samples and other medical items across campus. A medical professional loads the secure drone container at one facility, then a trained remote pilot monitors the drone as it flies along a predetermined flight path to a landing pad at the main hospital. The use of drones eliminates delays and lowers delivery costs.

The University of Maryland Medical Center in Baltimore is also testing drone use. In April, a drone carried a donor kidney to surgeons for successful transplantation into a woman with kidney failure. The medical center says that the technology has tremendous implications. In 2018, approximately 1.5% of deceased donor organ shipments didn’t make it to their intended destination, and nearly 4% had an unexpected delay of two or more hours, reports the United Network for Organ Sharing. Drones can slash those numbers significantly, and integrated drone ports can help improve the speed of delivery.

While the Federal Aviation Administration continues to evolve requirements around unmanned aerial systems, health care organizations are helping to lead these discussions as well. Leo A Daly says it is presently working with the Facility Guidelines Institute to better understand what codes and regulations must be addressed to secure drone ports in tomorrow’s hospitals.

Managing supply chains as they move across the care continuum

From hospital to home care, supply chains are going to where the patients are

Improving distribution of supplies can lead to better patient outcomes