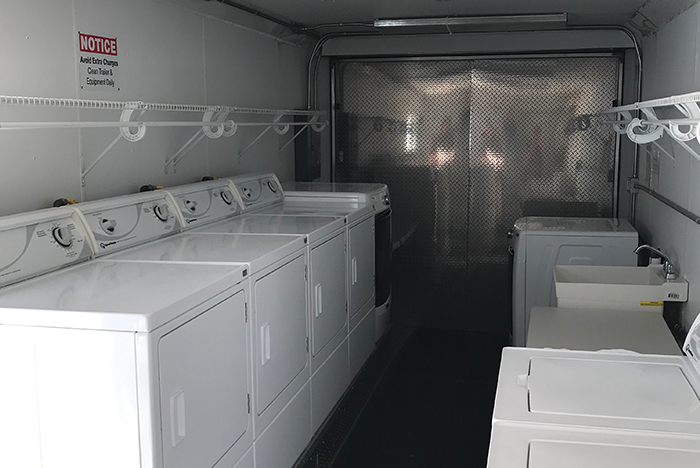 Copley Hospital brought in a temporary commercial laundry trailer after its vendor closed its doors.

Copley Hospital, Morrisville, Vt., had just eight days to come up with an alternative solution to clean its 300 loads of laundry following notification that its former vendor Kleen, Lebanon, N.H., would close.

The 25-bed critical access hospital goes through 6,000 pounds of laundry in one week. Although Copley owns its linens and does have a commercial washer and dryer on-site to supplement, it relied on a vendor to wash, dry, fold and deliver the bulk of its laundry three times a week. Now that happens on-site via the hospital’s mobile laundry trailer.

Following Kleen’s announcement, the hospital and others in Vermont and New Hampshire that also contracted with the company hopped on an emergency call to find a joint solution. When that didn’t pan out, Copley contacted other vendors, but no one could take on the hospital’s load on short notice.

“Our director of environmental services (EVS) and director of facilities put their heads together and did a great deal of research,” says Dean Mudgett, director of development, marketing and community relations. “After brainstorming, the most viable solution for us was to rent a commercial-grade laundry trailer from a vendor in Maryland who drove the trailer up to our campus.”

The trailer houses six commercial-grade washers and dryers each. The facilities team identified an area in front of the hospital near the ambulance bay that already had the necessary hookups for water and wastewater. It also put in air conditioning and oscillating fans for comfort. Mudgett says the hospital began connecting the trailer in the afternoon, and it was operational by evening.

The EVS team added the equivalent of 1.5 full-time equivalents to take on the additional responsibilities. Although the entire EVS team has received infection prevention training on how to handle health care linens, Mudgett says the hospital needed to hire another person solely dedicated to laundry operations. Other health care staff volunteer to help fold laundry to keep up with demand.

The hospital uses disposable products in place of linens when appropriate, such as with patient gowns and table drapes, to help conserve inventory. Copley won’t have to do that much longer, however. Mudgett says several vendors have contacted the hospital, and it’s aiming to nail down a permanent provider by October.

“Our goal is to have formed a new relationship and to send the trailer back,” Mudgett says. “We don’t want to be out there doing laundry once North America’s weather takes its turn.”

Hospital infection preventionists and laundry facility leaders work together to successfully identify and eliminate an outbreak.