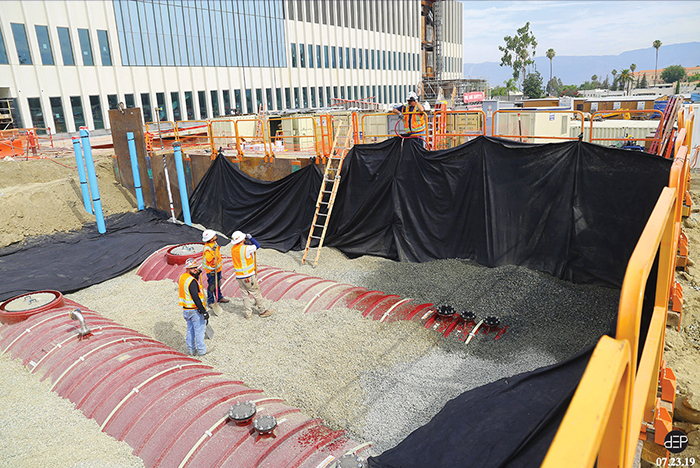 Emergency water supply adjacent to the new hospital allows it to redirect resources when necessary.

Five years ago, Loma Linda (Calif.) University Health embarked on its Vision 2020 initiative to continue serving California’s Inland Empire region, where it has provided care for more than 100 years. The plans called for a new 320-bed medical center and 373-bed children’s hospital, as well as several innovative engineering techniques to ensure the facility’s safety for years to come.

The most recent safety structures to be installed are two emergency water storage systems.

A set of four 25,000-gallon water tanks have been installed along the southeast area of the building. These tanks will become the source of water needed to keep operations running in case of an emergency that interrupts regular water supplies. The hospital plumbing system is designed to allow engineers to redirect water to areas of most need and away from areas that might have sustained damage. A second water storage system, a 50,000-gallon tank located along the southwest side of the facility, will be used to fight any fires that might occur.

Another feature that will allow the new facilities to withstand natural disasters in the earthquake-prone area is its flexible piping system, which will transport resources such as water and power into the hospital’s systems.

These pipes are typically made of rigid metal or plastic; however, this project needed connecting pipes that contribute to the building’s resiliency. The new hospital project uses various types of flexible pipe configurations, and the majority of pipes connect below the building’s ground level. Some of the largest looped pipes are 24 inches and connected to each other with braided flexible connectors.

To reduce stress on the pipes during a natural disaster, architects and engineers designed a base isolation system that minimizes building movement by placing less stress on the anchors during an earthquake.

At its foundation, the building sits on 126 building isolators. Each weighing nearly 10 tons, the isolators are designed to absorb ground motion during an earthquake, while allowing the building to only move in a minimal way. Surrounding the building is a 4-foot “moat,” which will allow for additional protection.

Each of the building’s safety systems, whether complicated like the building isolators or simpler like the array of buried water tanks, has been included to allow patient care to continue in the face of any type of emergency.

“This has created a challenge that has been embraced as an opportunity to step forward in faith and an opportunity to build a new state-of-the-art hospital that best serves patients, medical staff and the students who train at Loma Linda University Health,” Hart says.

The project includes building a new home for its International Heart Institute. The institute will expand its comprehensive diagnosis and treatment services with more space and private patient rooms. The hospital will offer single check-in so that patients can get to their physicians faster.

As a faith-based organization, the new hospital will include a 60-seat chapel prominently placed next to the lobby with private prayer rooms, providing a place of respite. In addition, the chapel will open to a healing garden. The hospital’s grand hallway will feature an extensive set of paintings by artist Nathan Greene depicting the healing miracles of Jesus as found in the Bible.

The nine-story children’s hospital and 16-story medical center are on track to be completed in December.