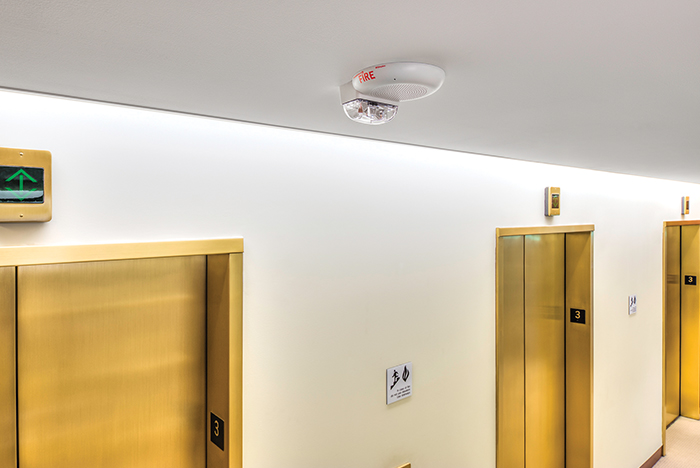 Fire safety is extremely important in all buildings, but especially in hospitals and other health care facilities.

This makes it critical that facility managers focus their fire protection strategies on maintenance of existing technologies, and identify where system upgrades are needed. These tactics can help limit nuisance alarms and provide more accurate information to occupants when future incidents occur.

A reliable fire alarm system should quickly detect a fire and provide clear messages within the facility, according to fire safety vendors that supply the nation’s hospitals. In addition, the system should minimize patient disruption and be immune to nuisance alarms.

Mass notification systems have seen a major transformation in recent years, according to Dick Bauer, vice president of sales for Honeywell Fire, Atlanta. “Fire alarms in use 15 years ago were binary with an on or off function. Today, with mass notification systems such as voice alarm technology, hospital management can provide tailored instructions to staff and patients depending on their location within the building.”

Bauer adds that air sampling is another technological advance used in health care facilities. “With air sampling technology, an aspirating smoke detector constantly pulls air into its detection chamber, making it more active and sensitive to potential fires sooner. It also has a lower threshold setting that can be adjusted to trigger a response most appropriate for each risk level.”

The internet of things has played a key role in establishing a faster and more secure data connection between the fire and life system, fire panels and hospital management as well as with first responders, Bauer adds. “Today, facility managers can access the system from one central control room or through their smartphones to improve response.”

From cloud storage of data to analytics and artificial intelligence, the internet of things can be used to improve the monitoring of fire safety systems for performance and optimization, according to Julie Brown, institutional market leader at Johnson Controls Building Solutions North America, Milwaukee.

“These technologies also can be integrated with more traditional systems, such as mass notification, to make them smarter,” Brown says. “When mass notification systems are updated with internet of things capabilities, data can be sent to a centralized location to streamline system oversight. This can lead to more proactive inspections and faster response times should a system go down.”

“For example, in the case of a small isolated fire, an individual speaker can be activated to deliver a message in that area,” Brown explains. “In a broader emergency situation where widespread response is needed, groups of speakers can be used to deliver critical instructions for parts of the building.”

Honeywell Fire’s VESDA-E product line uses smoke detection technology that actively draws in air from the environment and can notify building staff of potential fires before they develop, reducing false alarms and enabling a more accurate response. The company also offers a bi-directional amplifier system. “This system amplifies communications signals for first responders within buildings and provides 99%-plus radio coverage so there is always two-way communication from a first responder to fire ground operations,” Bauer says.

Potter Electric Signal Co., St. Louis, has released the PotterNet Fire and Facility Supervising Station, a desktop application that facilitates the networking, monitoring and control of IPA, AFC/ARC and PFC-4064 fire alarm control panels. It uses a distributed client-server model for communication to reduce or eliminate single points of failure. “PotterNet can monitor all compatible panels in a single building, on a local campus or across multiple sites worldwide,” says Amy Liedman, director of product management for the company’s fire and security division.

“The Signature Optica’s ability to distinguish between real fires and nuisance sources makes it ideal for environments such as laundry and boiler rooms, patient rooms with showers and commercial kitchen areas,” Hughes adds. “The technology also is beneficial for assisted living facilities where steam and cooking sources may be present.”

Moving into sprinkler technology, Fike Corp., Blue Springs, Mo., has introduced the DuraQuench water mist system, according to Jason Jones, global product manager of fire suppression. Benefits include half the water output of a traditional sprinkler in patient care and office spaces, and one-tenth the water output of a sprinkler system when protecting machinery spaces, such as those housing backup generators. DuraQuench also is less prone to the buildup of microbiologically influenced corrosion (MIC).

“MIC occurs in a fire sprinkler system when bacterial sludge builds up typically in black steel pipe,” Jones says. “When a sprinkler system containing MIC discharges in a hospital environment, cleanup can be extensive and expensive, due to the greater amount of water used and to microbiological contamination.”

Major challenges for fire protection vendors in hospitals center around responding to trends in new construction and renovation, and applying NFPA standards to the changing landscape, according to Susan Schierwagen, vice president of product development – fire protection at Victaulic, Easton, Pa.

“The top construction trends in hospitals that the fire protection industry must take into account are technological and data advancement, patient-satisfaction focused design and building information modeling,” Schierwagen says, adding that fire protection systems must accommodate sophisticated ceiling and room designs and rely on products that enable efficiency and adaptability.

To that end, Victaulic has introduced the VicFlex Dry Sprinkler Style VS1, which combines traditional dry sprinkler technology with flexible fittings technology. Designed for both wet and dry sprinkler systems, its design flexibility and ability to bend allows for easier installation, keeping water in the proper location of the heated space so that pipes don’t freeze and the system does not become impaired. The entire length of the assembly encompasses the VicFlex Dry Sprinkler. This is important because standards require a certain dry sprinkler length according to average external and internal temperatures, the company states.

Drilling further down into construction and renovation issues, Hilti North America, Plano, Texas, offers a firestop cast-in sleeve system for pipe and cable conduit penetration through concrete over metal deck floors. The Cast-in Device for Metal Deck (CFS-CID MD) sleeve is positioned on a platform prior to concrete pouring. “The system does not require the use of a torch or plasma cutter, which reduces the risk of impacting the structural integrity of the metal deck,” says David Barbier, business unit manager of fire protection. “Its integrated firestop inlay eliminates the need for additional firestopping steps and reduces installation mistakes.”

“By protecting these critical circuits, E-Wrap not only meets building code, it also helps first responders communicate reliably to help fight fires and save lives and property,” says Matt Thomas, chief marketing officer. “This is especially important in health care facilities where staff is challenged with ensuring the efficient egress of their patients.”

Elsewhere, Greenheck Fan Corp., Schofield, Wis., recently obtained Underwriters Laboratories approval on a new method for installing fire smoke dampers that allows contractors to install them when traditional methods can’t be used due to space constraints. “It’s called the three-sided retaining angle installation method,” says Marty Gissel, segment manager — commercial dampers. “This new installation method eliminates the need for a retaining angle on one side of the damper if there is an obstruction.”

Bauer of Honeywell Fire predicts that the internet of things will prove to be even more important as smaller health care facilities are integrated into larger systems. “As health facilities consolidate and multiply, integration among fire and life safety systems across every site will be essential.”

Neal Lorenzi is a freelance writer and regular contributor based in Mundelein, Ill. 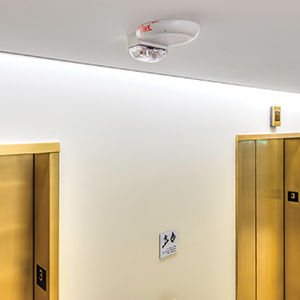 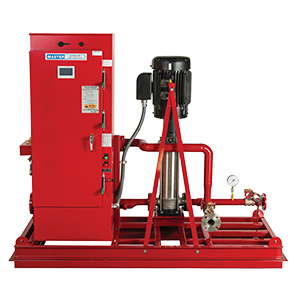 The DuraQuench system brings the benefits of water mist fire suppression within reach of most budgets and over a wide range of applications. Fike Corp. 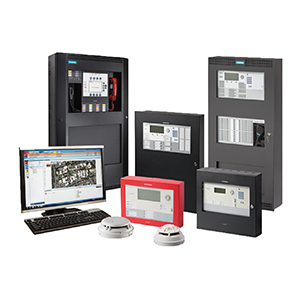 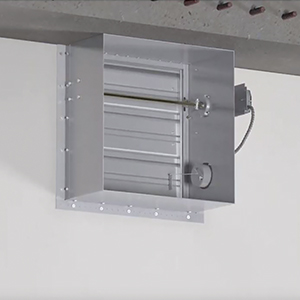 This three-sided retaining angle installation method eliminates the need for a retaining angle on one side of the damper if there is an obstruction such as a wall, floor or pipe. Greenheck Fan Corp. 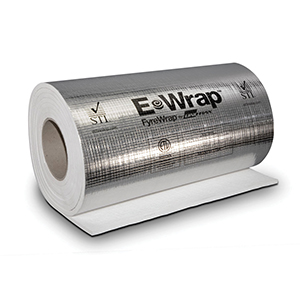 E-Wrap protective wrap is designed for fire protection of critical circuits and infrastructure such as fire pumps, signaling equipment and alarms.STI Firestop 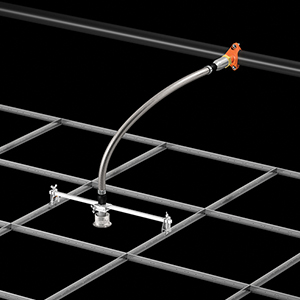 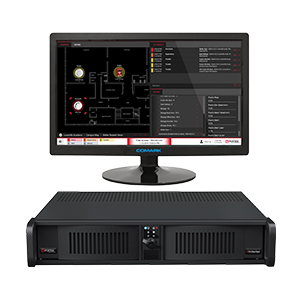 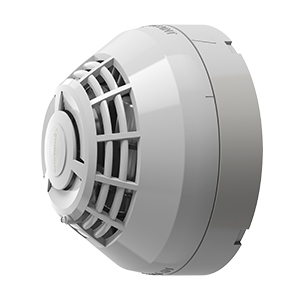 Signature Optica smoke detectors are designed to reduce the probability of false alarms.Edwards 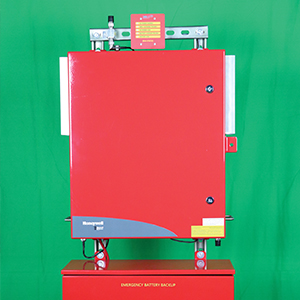 The UL 2524-listed BDA system boosts in-building signals to provide 99%-plus radio coverage so there is always two-way communication between a first responder and fire ground operations during emergency events.Honeywell Fire 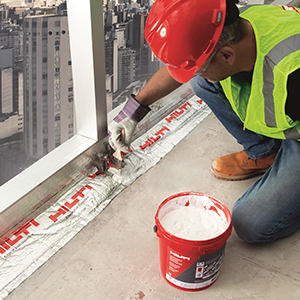