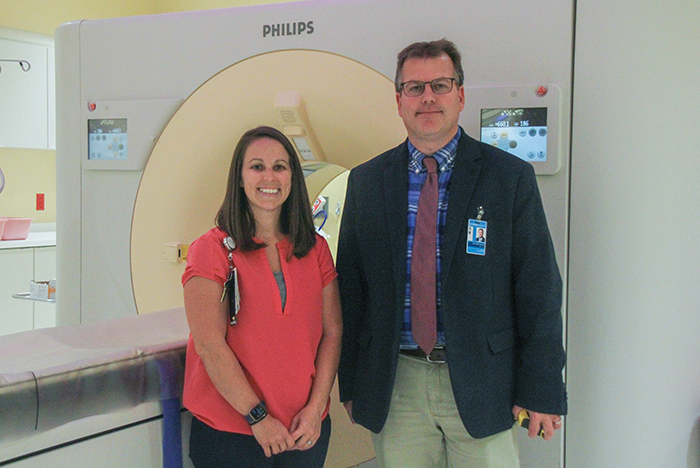 Throughout his entire adult life, a doctor has never weighed David Capozzi during an office visit because he uses a wheelchair, and few doctors’ offices have accessible scales.

It’s only been a few years since his primary care physician added an adjustable exam table to accommodate people with physical disabilities. But Capozzi, who lost the use of his legs following a car accident in 1977, says he’s never used that, either, since providers were unaware of its availability in one of the back exam rooms. 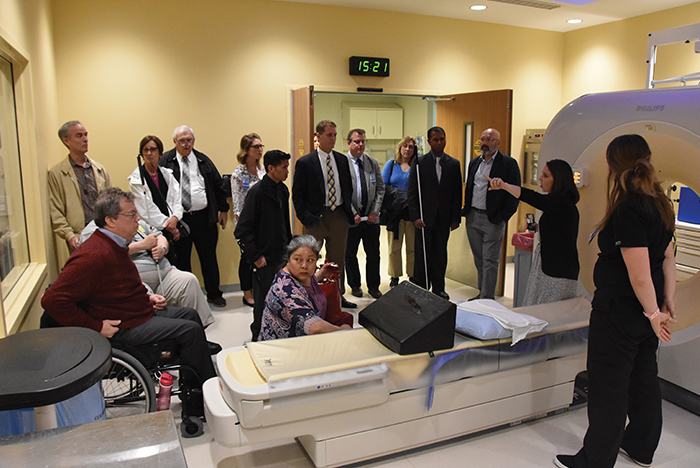 “They didn’t even know that they had it,” says Capozzi, who is executive director of the U.S. Access Board, an independent agency of the federal government that sets accessibility guidelines and standards under the Americans with Disabilities Act and other laws.

“People who use wheeled mobility devices aren’t getting the best care because they’re not able to use the equipment everyone else uses,” he says.

Capozzi and members of the Access Board toured facilities at Indianapolis-based Eskenazi Health system in May to discuss the standards in person. Despite the health care organization just opening a highly accessible flagship hospital in 2013, Matthew Royal, CHFM, CHC, director of biomedical engineering, says the tour was illuminating.

“Having that face-to-face conversation really helped me understand the intent and the challenges of accessibility for patients with disabilities,” says Royal, who also is an American Society for Health Care Engineering Board member. “It was really eye-opening to hear them say, ‘I can’t remember the last time I was weighed.’ That, to me, was one of the more powerful statements I had heard.”

Following that encounter, Eskenazi Health facility professionals decided to challenge themselves to meet the standards and ensure that those with disabilities can access all medical equipment at the system. Prior to the visit, Eskenazi Health’s chief medical officer and one of its trustees, who also is a person with a disability, and a member of the Access Board’s governing body, tasked the system with meeting the standards. 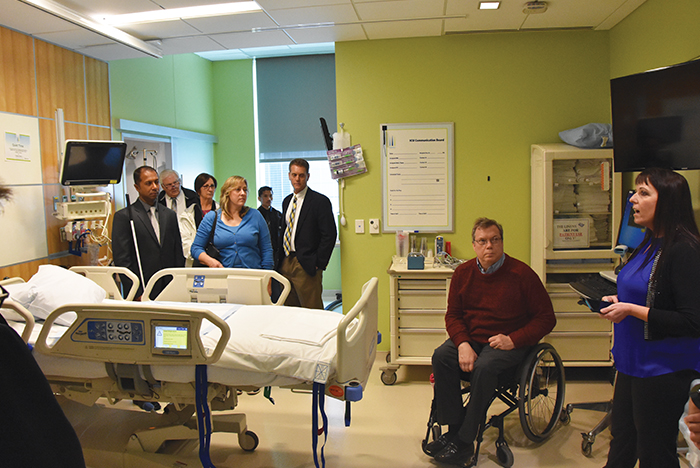 U.S. Access Board officials and staff discuss medical equipment during the board’s visit to Eskenazi Health.

“We knew we were an accessible hospital already, so my quick answer to them was, ‘I’m pretty sure that we’re going to meet many of these standards, but let me get down into the details to validate some of my assumptions,’” Royal says.

What followed was a carefully structured process to determine how far Eskenazi Health needed to move the needle. They started with an inventory review, looking at all of the medical equipment mentioned in the standards: wheelchair scales, exam tables and imaging equipment. Then, they went through each requirement in the standards to compare them against the equipment on hand, locating any gaps.

They asked lots of questions, Royal says, such as: “If someone needs a wheelchair scale, do we have one centrally located for people to find?”

Eskenazi Health reached out to vendors, too, quizzing them on compliance and their knowledge of available products. Some were unaware of the standards, while others followed them more closely.

Dayton, Ohio-based Midmark Corp. is one vendor that’s been plugged in to the process. The company was part of an advisory committee the Access Board created to provide recommendations on the final standards and has worked with Eskenazi during its own journey.

“You get a lot of different people in the room when you do this, and you see lightbulbs go off,” he says, noting that everyone from supply chain to facilities, designers and information technology started having conversations and understanding the challenge. “There’s so much information exchanged when you bring everyone together, and you just start collaborating. It really helps them get to where they’re going.”

Having all of those different perspectives in the room also aids facility professionals in understanding the intricacies that go beyond the Access Board’s standards, he adds.

“You need to have a complete team that understands the design, regulatory and clinical considerations, or you’re going to miss something,” Dues says.

Royal says they did a lot of education and communication with their planning and design team about the standards. That way, when they were planning to procure something, they were aware of why Eskenazi Health was trying to meet the standards and what needed to be done. 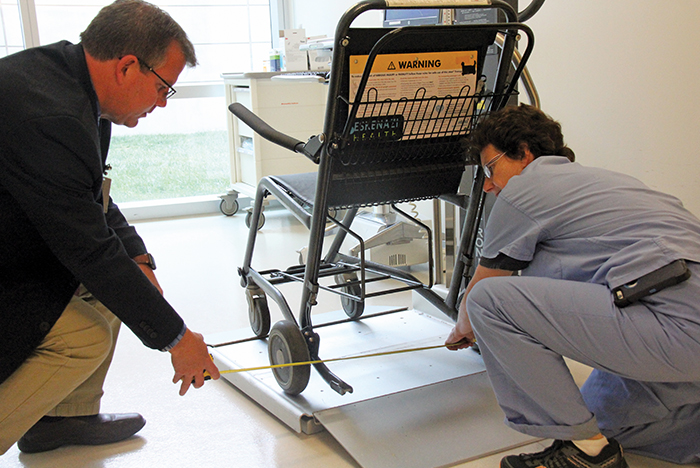 Royal and a staff member measure clearances and heights for pieces of medical equipment.

One of the most crucial lessons learned for Royal along the way was the importance of collaborating with the health system’s entire team to adopt these accessibility standards. For instance, they worked closely with Eskenazi Health’s ergonomics department to ensure they not only purchased the correct equipment, but also that it was positioned properly.

Oftentimes when consulted, their answers meant making sure that equipment was mobile and not in a fixed position, but also stable once it locked into place, says Susan Hardesty, an occupational therapist who specializes in ergonomics. That flexibility means that any space can be made accessible, she notes. You can buy a beautiful piece of medical equipment, but it’s useless if bolted into a corner too tight for a wheelchair to maneuver around.

“A lot of times when people are trying to adopt standards, build new spaces or buy new equipment, there’s so much red tape and time already invested,” Hardesty says. “I’m sure it feels daunting to bring one more person in, but it’s worth it. Make sure there is someone with that eye who doesn’t just look at the design or actual construction and layout, but also the flow and way patients and staff move and utilize the space.”

Royal notes that when addressing gaps, he found that many of the answers were about flexibility and functionality. They may have had accessible exam tables that were pitched at the right height, but they were missing adjustable accessory arms to support patients.

Imaging experts played a key role in filling gaps. Eskenazi Health purchased much of its radiology equipment in 2013 before building its newest hospital. Roughly 85% of those machines do not meet the Access Board standards, often because they could not go low enough to accommodate individuals with disabilities. Others could not support the required weight limits, says Janice Walker, director of imaging services.

Hospital systems are not able to purchase dozens of new equipment to meet a voluntary standard. In some cases, it has worked with vendors to adapt equipment so that tables can go slightly lower. For others, Walker and Royal have worked together to craft a strategic plan for the next five years to replace the rest of their imaging equipment with accessible versions. The lifespan often ranges from 10 to 15 years, and they’re already thinking about the next purchases and how they can meet the standards.

“From an imaging perspective, I wish that I could say I was a trailblazer back in 2013 when we opened the new facility, but, moving forward, Matt and I will partner together very closely to make sure that all of our equipment meets these new standards,” Walker says.

Lifts are great because they help with back injuries, but they also help with accessing diagnostic equipment. They’ve placed lifts in most of their diagnostic imaging rooms, such as with computed tomography scanners and nuclear medicine cameras, to assist patients in transferring to equipment.

Thus far, Eskenazi Health hasn’t had to replace too much equipment; much of their inventory already met most of the standards. Gaps included wheelchair scales that were too narrow or exam tables missing accessory arms.

They’re concentrating on making any upgrades as equipment ages and incorporating that thinking into the planning of new projects, all while many manufacturers are playing catch-up to offer the right product mix.

For instance, one project on the horizon is the renovation of some areas in its outpatient care center for new service lines. Those will require new tables and other updated equipment. As they refresh rooms with new carpet, tile and other materials, they’re replacing with new equipment to meet the medical diagnostic equipment standards.

“So, as we add a new room or are replacing a device, we want to make sure that the equipment we’re buying meets those standards,” Royal says. “So, there is really not a whole lot more cost as we go forward. Some items might cost a little extra, such as exam tables with scales built into them, but typically it is worth the larger investment.”

Additionally, Royal says he is making sure Eskenazi Health’s new computerized maintenance management system (CMMS) has a check box in the software to make sure the Access Board’s standards are being met on every project. The standards are listed in the CMMS as a drop-down menu so they can easily assess as they are inventorying equipment for a new construction project.

He’s also putting together an organizational procurement policy — which he sees as his “legacy” — so that if he ever leaves, the standards remain in place. Royal believes Eskenazi Health wants to continue along the same trajectory, regardless of whether the federal government ever makes these policies mandatory; he urges others to do the same.

‘Right thing to do’

Going forward, the system will look to stay on top of the standards. Royal says he has signed up for the Access Board’s email list to receive any updates that are released about the standards.

“If your ethics and your morals are aligned, you’re going to do the right thing,” Royal says. “When I look at what the Access Board has spelled out, it’s not really about trying to meet the standards, to me. This is the right thing for us to do, and it goes to the very heart and soul of our organization, its mission and how we want to serve everybody at our hospital.”

Marty Stempniak is a freelance writer based in Chicago.

A look at another important facilities code change