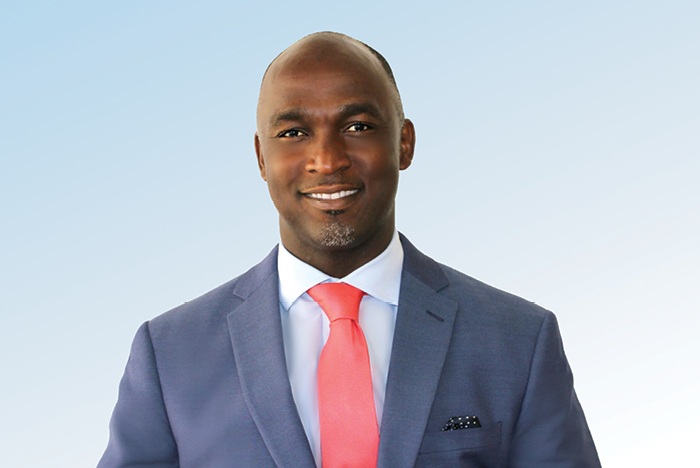 Gary Hamilton, PE, PMP, FASHE, SASHE, LEED AP BD+C, is senior vice president at WSP and a member of ASHE’s new diversity and inclusion task force. This month, he talks with HFM about his involvement in ASHE on the national and local levels, as well as his passion to give back to his community.

Where did your lifelong commitment to learning begin?

I was born in a community called Shaolin in Jamaica, which we called the ghetto. But I had a mother who insisted on a good education for me and my siblings. I attended one of the premier institutions on the island called Manning’s School. Attending that school helped me in my development to dream bigger than my mind could conceive. Even today, I still live by the school motto, “vita sine litteris mors est,” which, translated from Latin, means “Life without learning is death.” After I completed Manning’s School, I went to the University of the West Indies to pursue a degree in civil engineering.

How did you become interested in pursuing health care engineering?

I had a terrible motorcycle accident when I was 18 and severely damaged my kneecap. I went to the local hospital but was sent home because they didn’t have an X-ray machine to examine me. My mother arranged transportation for me to Kingston where my aunt worked at a university hospital. I had what I thought was a successful surgery, but I woke up with a discolored cast that was red all over from blood and found out there was an infection in my knee. After that, I had several more surgeries and then did a lot of physical therapy. I exceeded the physician’s expectations, and was able to play semi-professional soccer.

I really tried to understand why after an orthopedic surgery that infection set in. That’s when I started thinking about the health care environment and infection control. When I finished my degree and moved to London, I got my first job with an HVAC firm and started learning more about airflow in the built environment. After that, I worked for a health care engineering firm in the United Kingdom, and that’s when I started doing a lot of health care engineering, and my passion for designing critical environments grew. We did a lot of assisted and senior living all over the country and in Canada. But, at the time, I wanted to do acute hospitals and medical office buildings, so I then joined SmithGroup JJR, Washington, D.C. I spent 10 years there in various positions. Then, I was approached by WSP. I’ve been here for two and a half years and enjoying every moment of it.

How did you learn about and become involved with ASHE?

My boss at SmithGroup JJR asked me “Are you a member of ASHE?” and he told me to look it up. I always wondered, “Where is the organization that elevates health care engineering?” So, when I found ASHE, I said, “Wow, here it is!” I joined 11 years ago. I think I’ve been to every conference since then because it’s a great atmosphere in terms of learning and interacting with my peers. ASHE has really shaped my career in terms of challenging me to push the envelope of design.

I started volunteering eight years ago. My first position was on the membership task force. Then I was on the ASHE editorial advisory committee. I was serving also on the awards committee, and I’m serving on the diversity and inclusion task force, which began in 2019.

Why did you decide to serve on the new diversity and inclusion task force?

When I was named a Senior ASHE (SASHE) and walked on the conference stage in 2015, it was huge for my career. But when I came off the stage, an African American member of the military walked up to me and asked, “How did you get up there?” He explained that he’d been going to these conferences for 10 years and had rarely seen a black person on the stage getting these awards. It had me really thinking about diversity. I wasn’t as vocal at the time, but I really understood my approach was to take more action, and if there’s not a lot of folks who look like me that are SASHEs, then it must be an even smaller number for Fellow ASHEs (FASHEs). So, for the next five years, I pushed myself, and it was a crowning moment to receive my FASHE last year.

During this time, I also had been talking to Charmaine Osborne, ASHE’s membership manager, because she was part of two committees I served on. I was talking about diversity, and she told me about this new committee and that I should be a part. I knew I absolutely had to join. I’m always an advocate for diversity and inclusion — not only for African Americans, but for all minority groups. I think it gives you a better outcome to have a diverse view on topics.

What are some projects the task force is advancing?

The first initiative approved by the ASHE Board was to change some ASHE website information to include language that supports diversity, equity and inclusion.

Some of the next initiatives we have going on include Voices of ASHE, where we are working on a process to nominate folks on a national level and make more people visible who are doing well, like York Chan, the last Crystal Eagle Leadership Award winner. We want it to be told not only on the stage, but also in articles so we can let people in the minority see others like them making it to this level. Another thing we are doing is presenting a session on diversity, equity and inclusion at the International Summit & Exhibition on Health Facility Planning, Design & Construction in March. We’re also looking at mentorship, and the Board approved our recommendation. We are in the process of working out costs.

When and why did you begin your local ASHE chapter?

I reached out nationally and used the ASHE website to get most of the information on building our local chapter, the National Capital Region Society for Healthcare Engineers. We’ve been an affiliated chapter for four years and have bimonthly events. We have golf outings, and about 95 people attended the last one. At the end of October, we had an event at a Colab built and operated by Hitt Contracting, which is a lab that allows different health care facilities to set up prototypes to look at designs for different specialized rooms in the hospital. What we’re pushing for now is to get more health care members. We do have the required percentage for ASHE affiliation, but we still want it to be as much benefit as possible to the facility folks.

How has your passion to give back impacted your personal life?

In 2007, I was approached by my old soccer coach who was my mentor growing up. He was starting a soccer competition for the youth in Jamaica as an outlet for the community kids. It resonated with me because that was part of what helped to transform my life. So we started a tournament and have competitions all year round. When I’m watching and see the kids in their element, it validates my involvement in such a great initiative.

In 2014, I decided to apply for nonprofit status in Maryland to start the Dreams to Reality (DTR) Foundation as a 501(c)(3) organization. At that point, I was able to get contributions and get fundraising to support more activity.

We’ve done different fundraising events and contributed money to the hospital that goes to purchase medical equipment. We have an initiative during Christmas for the pediatric inpatient unit where we play Santa and give gifts to the children and a small stipend to the nurses and staff. They look forward to it every year.

That’s my passion: to give back to the community and especially to a community that has given me everything. That’s near and dear to my heart.