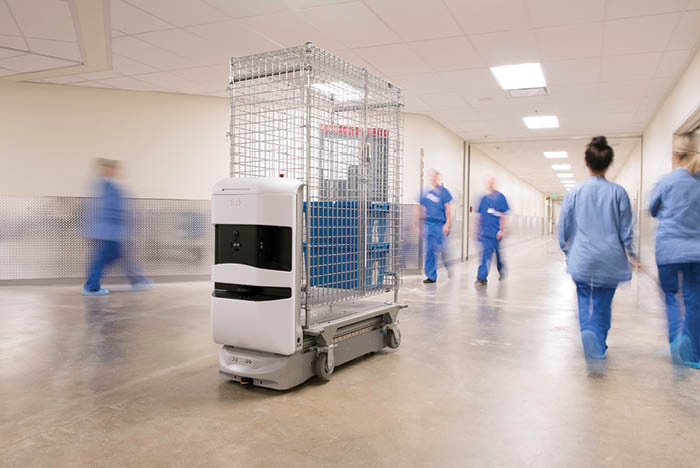 A fleet of 4-foot-high robots known as “TUGs” are providing Stanford (Calif.) Hospital’s environmental services (EVS) teams with welcomed assistance for a variety of physically demanding and repetitive tasks, including supply transport and waste removal. With 23 TUGs on the floor in Stanford Hospital and five in the nearby Lucile Packard Children’s Hospital Stanford, Palo Alto, Calif., EVS teams in both facilities now have more time and energy to remain focused on patient care and clinical assistance.

“The biggest impact of the TUGs is the degree to which the management teams within their respective agencies can stay engaged in more significant or value-adding activities, as opposed to the constant back-and-forth pushing of waste and supplies,” says Shaheed Hickman, supply chain project manager for both hospitals.

Produced by ST Engineering Aethon Inc., Pittsburgh, the TUGs have been used to shuttle used food trays, linens and other garbage items to their designated places. They also maneuver carts holding small packages, bulk food items and nonurgent medical supplies to the basement level of the hospital, where staff coordinate the process of delivering items to their end destinations. These activities are performed throughout both the children’s and adult hospitals, and even to the gift shop attached to the facilities.

Moving at about 2 miles per hour and capable of pulling more than half a ton, the TUGs were first deployed at the children’s hospital in October 2018 and made their debut at Stanford Hospital’s opening day last fall. The robots have only grown in popularity since then, as demand for more frequent usage among staff at both hospitals increases. Supply chain management uses the term “racetrack” to describe their upcoming plans for planning and implementing TUG usage to meet staff demands.

The TUGs use GPS and laser-guided sightseeing capabilities to generate 3D maps of their surrounding environments and quickly detect any obstacles in real time. The 3D maps are also converted into a 2D format, allowing managers and staff to track each robot remotely. The TUGs are capable of distinguishing between stationary or moving objects within a 10-foot radius and can even open hospital doors using wireless technology. Between tasks, the TUGs automatically recharge themselves by returning to designated docking stations.

Use of the TUGs also has implications for EVS team safety and resource conservation in the form of labor savings. “It’s not labor savings in the sense that any workers are being replaced but that our human resources can now be used in more impactful ways,” Hickman says. While reducing the burdens of heavy lifting and high foot traffic among EVS staff, the TUGs also know how to remain out of the way for the sake of employee safety; the robots stop movement the moment they are touched, and if a fire alarm is triggered, they immediately pull off to the side of the hallway to clear up the footpath.

Other safety features include the ability to audibly announce spatial directives such as “TUG has arrived” and “crossing hallway.” Apart from these programmed announcements, the robots do not generate any other audible statements or respond to any verbal cues.

The new Stanford Hospital, which is linked via an enclosed skybridge to the original facility, has expanded the potential uses and proliferation of the TUG robots. Apart from their EVS support, the robots also assist pharmacy technicians in various tasks requiring high degrees of timeliness and accuracy, indicating that this may be only the beginning of fully realizing how these autonomous robots can enhance the health care environment and promote well-being across the board for both patients and staff.

Does your health care facility use automated disinfection technology to enhance cleaning protocols?

Ohio State University and AHE team up on program to train next generation.