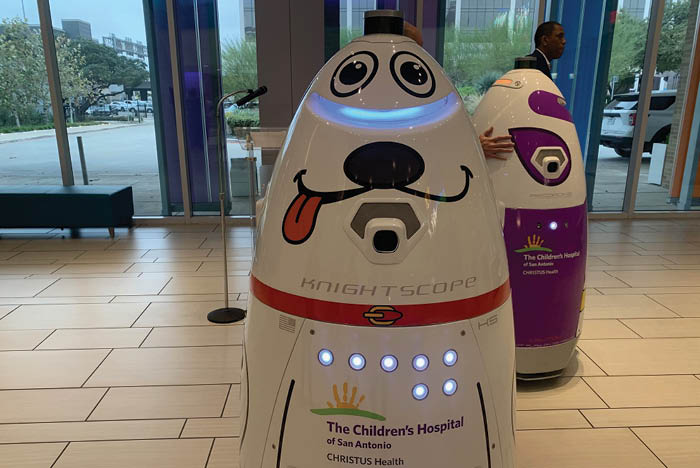 The robots were given a friendly look so as not to intimidate young patients.

The Children’s Hospital of San Antonio, part of the Christus Health system, has added two new members to its security workforce, and their names are Lightning Willie and Captain Violet. And, although they may sound like two superheroes, the recent recruits are actually robots assigned to patrol the exterior grounds of the children’s hospital.

The robots by Knightscope Inc., Mountain View, Calif., operate within a predefined geo-fenced area and are equipped with several different sensors — light detection and ranging, GPS, and inertial and wheel odometry — to develop a complete picture of their environment, determine their location and plot a directional path. Multiple embedded cameras continuously snap photos and take video of surroundings, similar to a fixed security video camera. The sensors support object avoidance by allowing the robots to understand their environment every millisecond. If a visitor finds themselves in the immediate vicinity of a robot, it will either wait for them to leave its path or maneuver around at walking speed.

Roy Alston, vice president of security, says the robots look for anomalies that might suggest criminal activity — such as a person in a restricted area of the hospital — and alert security of concerns.

“The Children’s Hospital of San Antonio presents a unique set of circumstances for our security team because of its setting in the heart of a major metropolitan area,” Alston says. “So, we wanted to be proactive in ensuring the safety of all of our physicians, associates and patients who visit the children’s hospital. The robots will serve as a first line of defense to help detect and root out any potential security situations before they ever rise to the level of becoming a security threat.”

Lightning Willie and Captain Violet can also conduct two-way communication, allowing visitors to speak directly with security by pushing a duress button. The pair even respond to some patient questions.

Since the idea of security robots could seem intimidating, especially for children, Knightscope created fun designs.

“We knew that we would primarily be serving children and families, so we wanted to include some fun and whimsy,” says Stacy Stephens, who serves as executive vice president and chief client officer for Knightscope Inc. “We are very excited about what we have worked together to develop, and we are especially thrilled to provide our state-of-the-art robots to The Children’s Hospital of San Antonio.”

Hospitals are adopting robots to free staff up for more important functions.