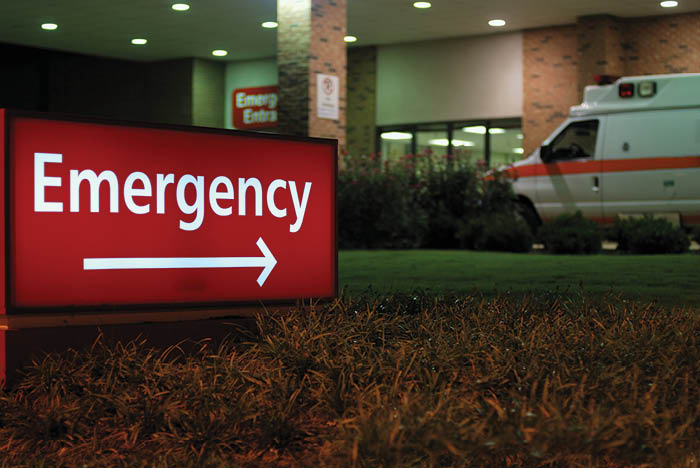 The U.S. has been experiencing increasingly numerous and intense weather events, and scientists say this trend will only accelerate in years to come.

Hurricane Sandy crashed into the Jersey shore in 2012, killing more than 100 people with estimated reparation costs of $65 billion. Likewise, in May 2013, Oklahoma experienced 63 tornadoes, including one EF5 tornado causing almost $2 billion in damages. More recently, 2018 marked the deadliest and most destructive wildfire season on record in California, with more than 8,500 fires burning an area of nearly 2 million acres and killing 103 people. Health care facilities caught in the middle of it were forced to shut down due to a lack of power.

During a critical event, a health care facility serves an important community service without which an already challenging circumstance can be worsened.

Last year neared earlier levels of devastation. Because of the threats of wildfires, utilities in California shut down huge swaths of the electrical grid in the heat of 2019 to ensure that their lines did not cause new fires. In October 2019, 1 million customers were without utility power for 48 hours, including some local health care facilities. Wildfires in the weeks that followed again forced some facilities into a full evacuation.

Whether it is power shutdowns, wildfires, earthquakes, tornadoes or hurricanes, climate scientists say the increasing frequency and severity of serious weather events is the new normal, not only for California but also for the rest of the country. Indeed, hospitals everywhere are recognizing the increase in various kinds of severe weather events and are working to find ways to build resiliency.

Traditionally, health facilities professionals have designed hospitals with diesel generators as backup power sources, thinking this would enable a hospital to ride through outages. These machines are relatively inexpensive, reliable and have stood the test of time. However, they are notoriously dirty in terms of air quality. They are loud, require extensive maintenance and are not traditionally suitable for long durations of providing prime power for normal operations.

And, for an emerging focus on decarbonization, they are especially problematic. California, at least partly because of its geography, consistently has the worst air quality in the U.S. As a result, the Clean Air Act requires the state to enact the country’s most severe air quality restrictions. California has long had restrictions on the run-time hours for diesel generators, and now, much of the rest of the country is beginning to follow suit.

And while it may appear that the diesel generator is a less expensive option than other sources, the per-unit cost of electricity from the diesels is high because they run so rarely. The capital cost of these assets must therefore be amortized over very few minutes of actual use, making them an extremely expensive insurance policy from a cost-accounting perspective.

The good news is that new technologies are emerging. Health care systems that are investing in solar PV systems, fuel cells and, now, microgrids, will lead this shift toward greater resiliency.

Health care facilities in California in particular are now exploring the use of fuel cells due to the increasing threat of fires and resulting power shutdowns. The problem is that the new technologies are unfamiliar to designers and operators and, most of all, code writers and enforcers. Many of these new technologies have different operating characteristics, meaning that their use necessitates a different way of looking at the overall system design to achieve the needed level of reliability.

One of the first new generation technologies — fuel cells — entered the codes in the last five years as a permissible emergency power source. Yet even this technology faces continued regulatory and implementation challenges. The technical and engineering challenges can be solved, but the regulatory barrier is much more difficult. The most problematic of these is Centers for Medicare & Medicaid Services (CMS) acceptance.

A closer look at the opportunities and challenges of fuel cells and the role microgrids may play in their development will help clear up some misconceptions.

Fuel cells use chemical processes to convert hydrogen into electricity; thus, resulting emissions are substantially lower than those of conventional diesel generators. As a result, they can operate without air quality permitting in many jurisdictions. 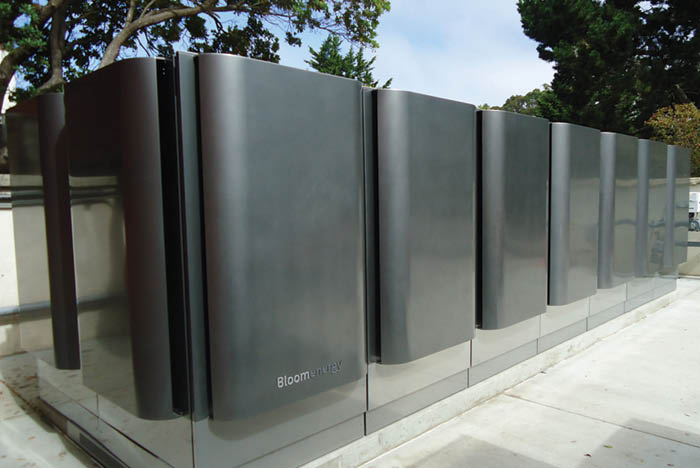 Fuel cells are composed of strings of modules, unlike many diesel generators where failure can be catastrophic.

Fuel cell companies are continuing to push the boundaries of fuel sources, including the eventual use of pure hydrogen. Fuel cells will by design be able to operate on various fuels in the future when they become widely available.

For now, they operate on natural gas. However, the natural gas may be from renewable sources such as biodigesters, yielding these devices as an effective part of an overall emissions reduction strategy. For organizations aspiring to carbon neutrality, fuel cells can be a powerful bridging strategy, aiming toward a purely hydrogen future.

Fuel cells produce electricity that is much purer than that produced by the power grid and certainly the diesel backup systems. And they must run continuously, so, unlike a diesel generator that is only used occasionally and therefore has a very high cost per unit of generated power, the fuel cells can amortize their costs over a lifetime of primary power generation.

Fuel cells also require less maintenance and create less noise than a conventional diesel generator. Maybe most importantly, fuel cells are composed of strings of modules that can be monitored and easily replaced before failure, unlike diesel generators where failure is usually catastrophic. Fuel cell control systems can monitor the status of the cells so they can be easily replaced before failure. And if they fail, their modular construction means a failure only removes a small amount of system capacity.

Fuel cells are now explicitly permitted by both the National Fire Protection Association’s NFPA 99, Health Care Facilities Code, and NFPA 70®, National Electrical Code®, to operate as the emergency source for a hospital. NFPA 110, Standard for Emergency and Standby Power Systems, is currently developing language to recognize and cover fuel cells for its next edition.

These editions of these codes do not permit fuel cells as an emergency power source. So, even if an owner has an imperative need for a different solution, and even if their local codes permit them to implement that solution, they are prevented from doing so.

Fuel cells also present some implementation challenges for health care facilities. They include the following:

Equipment starting. Traditionally, the codes have been written around diesel generator technology. The codes assumed that the diesel would sit idle and would start upon loss of the utility. The codes required that the emergency source start within 10 seconds of loss of utility power.

Fuel cells do not operate in the same way; it can take as long as 24 hours to get them started and up to speed. As a result, fuel cell systems must operate continuously. From the perspective of NFPA, this is not a problem. Both NFPA 99 and NFPA 70 permit the emergency source to operate continuously, thus blurring the line between what is “normal” and what is “emergency.”

This difference in starting, coupled with the way fuel cells are built (i.e., in modules), requires different designs for the arrangement and the distribution systems they serve.

Load following. Hospital loads fluctuate, and an important attribute of an essentially infinite utility coupled with a diesel generator is that this combination of sources is very effective at following these changing loads.

However, fuel cells don’t have true 7x24x365 ability to “load follow” dynamic loads in a health care facility in the same way. Consequently, fuel cells require a
different system design and, in most cases, a combination of storage and generation elements.

In general, the fuel cells could easily serve base loads, including supplying storage elements that would be available during other times when additional capacity might be required.

Because of the capital cost of the fuel cells, it is most economical to run them all the time, implying that they should be sized to supply the facility base load. One reasonable strategy would be to size them for the base load of the entire load of the facility and, in doing so, they would likely have the capacity to serve the entire set of essential loads.

Inrush current. The typical composition of electrical loads requires the electrical source to accommodate the inrush current caused upon the starting of large motors or energization of transformers. However, for 10 or more years, most designs have eased this inrush burden with updated starting systems.

These systems help the power quality for the facility and have the added benefit of lessening the amount of inrush the supply system needs to support. Although some ability for inrush support is still required, this allows the designer to be more progressive in source selection.

And, as noted above, the same designs that allow load following in a broader sense also allow a fuel-cell based system to manage inrush currents.

Fuel storage. The codes require some amount of on-site fuel storage to ensure that, in the event of interruption of service from off-site utilities, the facility will still have the energy supply needed to provide healing services.

Because fuel cells are driven by hydrogen derived from methane, a hospital relying on fuel cells will need to have an on-site supply of this kind of fuel. Storing natural gas on-site is unfamiliar to most people in the building industry but is very common in other industries.

In some instances, as in the event of a natural disaster, the utility might turn off the natural gas supply on one section of the pipeline. Due to the mesh structure of the pipeline network, the supply may not get interrupted.

Liquefied natural gas/methane can be stored on-site in many different configurations — multiple little tanks neatly stacked in varying sizes of horizontal configurations. This storage is new to health care and, while gas storage vendors tout the safety of their systems, they have not yet been deployed at a health care facility.

Lack of familiarity can create fear in potential deployment of these systems. However, stored gas is fairly commonplace, whether as propane in grills or bus depots running on natural gas.

First cost. Fuel cells have a high first cost. The cost has declined over the years but is still daunting. When the fuel cells can replace the need to purchase diesel generators, it improves the economics.

Fuel cells are new enough that many states and utilities, and even the federal government offers incentives for their purchase. Even with these incentives, fuel cells can be expensive. But because fuel cells run 24/7 as a prime-rated power source, the respective investment can be amortized over much more operation time.

This allows financial intermediaries to supply the fuel cells to hospitals through power purchase agreements, in which the operating cost will be roughly equal to obtaining electricity from the utility.

Following the inclusion of the fuel cell, NFPA 99 in its upcoming edition has created new language permitting the use of what it described as “health care microgrids.”

This language is an admirable step by the NFPA to recognize the rapid development of new technologies and new needs, but it is likely to create as many or more implementation challenges as the language allowing fuel cells.

Nonetheless, the opportunities for creative system designers to begin deploying emerging technologies are here. Due to climate events and the need for cleaner energy solutions, the necessity for resiliency is today.