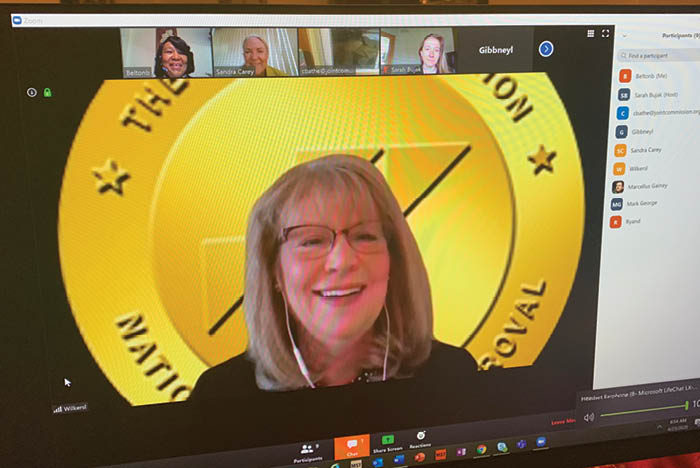 Image courtesy of The Joint Commission

Although The Joint Commission, which accredits and certifies more than 22,000 U.S. health care organizations and programs, suspended official survey and accreditation activity at the beginning of the COVID-19 pandemic, the organization says it piloted a new virtual process for life safety and environment of care surveys at two facilities in March.

Mark Pelletier, R.N., MS, COO, and chief nursing executive at The Joint Commission, says the pilot may mark a burgeoning direction for the organization as it continues to find new strategies to streamline its surveying process.

In June, The Joint Commission submitted a proposal to the Centers for Medicare & Medicaid Services (CMS) seeking to make virtual technology an approved part of its survey processes.

“Our proposal hasn’t been approved by CMS yet, but we have piloted our new established processes with life safety and environment of care surveys,” Pelletier says. “We worked with two health care organizations to see if we could effectively survey using GoPro cameras and laptops. The surveyors said this process was just as effective as if they were on-site. We started this new process when the pandemic began in mid-March. We were questioning whether someone carrying a camera could provide a thorough enough review. So, we said ‘let’s try it!’ The organization’s chief engineer carried a camera around and shadowed our life safety director from one area of the facility to the next.”

In addition to the virtual tour, the surveyors reviewed uploaded documents via a shared site between The Joint Commission and the health care organization. Pelletier says that The Joint Commission’s research department is identifying metrics that would verify whether the virtual survey process was, in fact, just as thorough as an in-person, on-site survey.

“Based on feedback we have received from both our customers and surveyors who have been involved in the virtual survey process, we believe we can effectively provide a meaningful assessment virtually,” Pelletier says.

While The Joint Commission works to fine-tune this new process for physical environment surveying, it has incorporated the concept into its clinical surveys. The organization received approval from CMS to begin surveying new hospitals.

The process, however, took on a new look as The Joint Commission grappled with how to effectively conduct work while adhering to new recommended practices such as physical distancing and self-quarantining for 14 days post-travel.

The organization first prioritized low-risk areas in which surveyors could safely work. It also adopted a number of other safety measures, such as limiting the number of people in one room during group sessions, using masks as routine practice, and maximizing the use of technology to conduct electronic medical record reviews using screen-sharing or displaying/projecting the record.

Other examples of changes in this new process include simulating an activity if a surveyor is unable to enter a high-risk space, and interviewing patients and staff by phone.

“The big question here is are remote inspections a thing of the future, and do we anticipate seeing more of them?” Beebe asks. “I think the answer is ‘Yes.’ A lot of city and county building code officials are using remote building inspections. And it’s gaining traction in accrediting organizations as well.”

Beebe says the recent pandemic and its underlying complications may give virtual surveys an even more significant lift in the near future, as they naturally adhere to social distancing, limited travel and avoiding large groups. However, with every new process, he says it’s important to identify and correct potential drawbacks early.

“I think there are lots of advantages to the virtual survey,” Beebe says. “It may lead to a simplified survey and inspection process, but there could be some potential disadvantages.

“Anytime there is a process change, we start looking at things differently, which means you find things differently,” Beebe says. “There could be some unforeseen cons to this that, unfortunately, we don’t see yet. It may uncover things we haven’t looked at in the past, or it may require additional validation to verify conditions. For instance, despite this being a virtual experience, will it require more documentation? My hope is that it wouldn’t because it takes away the value of a virtual inspection. But these are things we need to think through.”