Health care system moves closer to carbon neutrality by end of year, and carbon positive by 2025 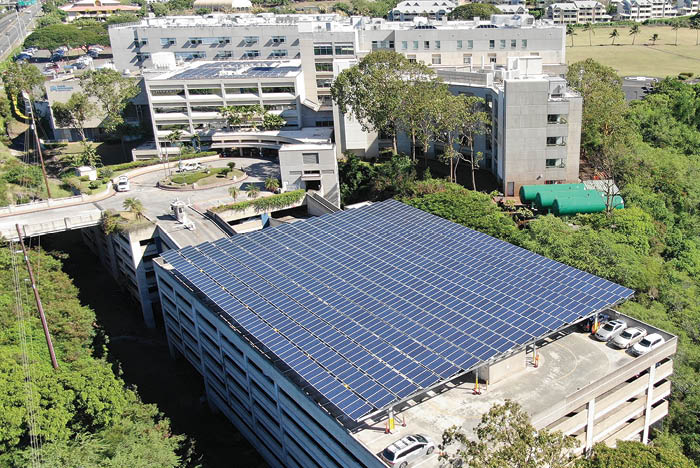 Kaiser Permanente, Oakland, Calif., one of the largest nonprofit health care plan providers in the U.S., is progressing toward its organizationwide goal of carbon neutrality (and eventual carbon positivity) with the recent installation of a 460-kilowatt photovoltaic (PV) solar power system at Moanalua Medical Center (MOA) in Hawaii.

Completed in 2019, MOA’s PV system is the largest of seven different solar installations spread across Kaiser facilities on the islands of Oahu and Hawaii. The seven PV systems generated nearly 2.3 million kilowatt-hours of solar energy in 2019 altogether, the equivalent of conserving 68,500 gallons of fuel or planting more than 848,000 trees.

In 2016, Kaiser announced its intention of achieving carbon neutrality by the year 2020, with an ultimate goal of being carbon positive by 2025. The organization also plans to reduce water usage in all facilities by 25% and source all food from local or sustainable producers by 2025.

“This year, we’re looking at ways to reduce our natural gas consumption to further lower our overall energy use index,” says Terry Muldoon, executive director of Kaiser Permanente Hawaii’s national facilities services division. “Our work in PV, LED lighting systems, more efficient HVAC systems and controls, and other energy-saving measures is showing great progress. This certainly supports and contributes to the overall performance of the company.”

As part of Kaiser’s multiyear sustainability plan, the organization has agreed to help fund the construction of solar and wind farms, along with one of the United States’ largest battery storage systems.

Since 2016, Kaiser has already opened California’s first LEED Platinum hospital in San Diego and issued roughly $1 billon in “green bonds” to promote future LEED building projects. Between the construction of new, environmentally focused facilities and the sustainable design additions at existing Kaiser locations such as MOA, the organization isn’t showing any signs of shying away from its goals.

“Every region, including Hawaii, has strict goals, constant measurement and reporting to keep us on track,” Muldoon says. “Our work at MOA and other facilities supports the goals of the region and the enterprise as a whole. This causes us to seek progress year over year; not just one year’s effort.”