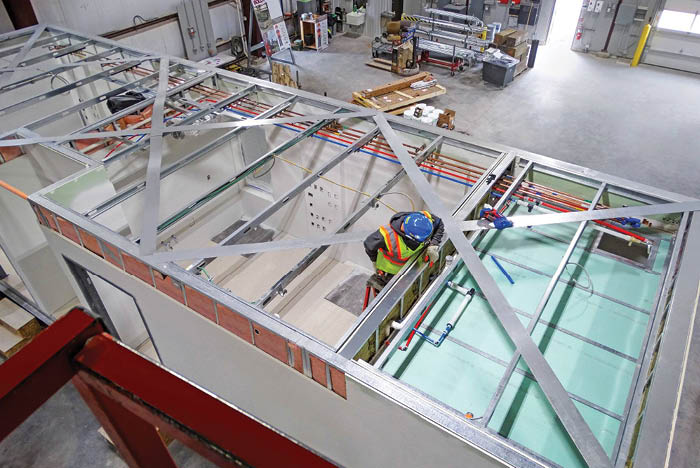 Hospitals have turned to alternate care sites to absorb fast increases in patient demand during the COVID-19 pandemic, and as the nation prepares for a resurgence of cases, the availability of hospital rooms to treat coronavirus patients is again an acute need.

At the beginning of the pandemic, the state of Maryland sought a safe and efficient strategy to quickly ramp up additional space. The state contacted national multidisciplinary design firm HGA and construction firm The Boldt Co., Appleton, Wis., as the two companies had partnered to create a modular, engineered solution for quickly building and deploying intensive care units (ICUs) nationwide.

Both firms had experience in prefabrication and creating modular spaces, and at the onset of the pandemic, Boldt was already working on a modular prototype for a health care facility in Chicago. That’s when the team at Boldt called HGA executives to ask if the idea could work for the hospital bed shortage.

After one phone call, a multidisciplinary team of more than 80 people joined daily video calls to design a modular ICU room that could be constructed in as little as two weeks. They created the STAAT (Strategic, Temporary, Acuity-Adaptable Treatment) Mod system, a prefabricated system that delivered hospital-level care in modules.

Boldt teams ramped up the prefabrication factory in early March and laid out production lines to provide social distancing for skilled workers. The first order from the state of Maryland was confirmed on April 8. Two weeks later, the first four units were loaded on semi-trucks and bound for Adventist HealthCare Fort Washington (Md.) Medical Center.

The STAAT Mod can be deployed in diverse environments, from convention centers to freestanding hospital expansions. Multiple independent modules can connect to each other or to a hospital with segregated spaces for patient care and health care workers.

A total of 12 modules were installed adjacent to the hospital, providing 16 private ICU rooms. The two-week process to install the modules on-site involved 10 local subcontractors to attach the prebuilt roof, install utilities, hook up medical gases and electrical, and install exterior ramps.

The system offers a number of benefits specifically tailored to help care for coronavirus patients and prevent the virus’ spread. Modules provide hospital-level clinical care for infection control, patient isolation, access to lifesaving technology and isolation rooms if needed for extended periods of time. The STAAT Mod allows users to treat infectious patients in private isolation rooms due to the virus spreading via respiratory droplets in the air or from droplet contact on surfaces.

They also are designed and constructed for rapid deployment. Because they are constructed indoors in a prefabrication facility, construction teams are not delayed by weather and can maintain tighter controls on production scheduling and cost. Prefabrication allowed for speed, quality and safety for contractors and cost significantly less than conventional construction. In fact, despite working in the middle of a pandemic with teams collaborating virtually, the entire project for the hospital was delivered within scope, on schedule and on budget.

“The initial idea was to provide rapid response for hospitals and build a product with off-the-shelf, readily available parts because we didn’t know what the supply chain would be like,” says Ben Bruns, executive vice president of The Boldt Company. “Over the course of three weeks, we went from concept to full design, and fabrication was underway.”

The design was developed and tested through virtual reality simulation exercises by experts, including critical care nurses trained in COVID-19 protocols, a hospital environment specialist in infection control, and Lean process engineers for rapid construction and delivery.

“When you enter the unit, it feels like a new hospital wing, and it is a seamless addition to our existing structure,” says Griffin L. Davis, M.D., vice president and chief medical officer for Adventist Fort Washington Hospital.

“The amazing thing was we quadrupled our ICU space in two months,” he says. “The modular ICU has quality construction and state-of-the art technology. It represents the future of health care construction, and I’m glad we have it.”