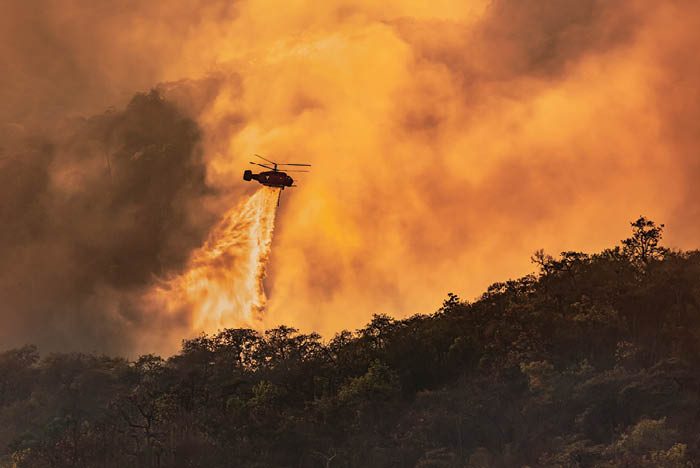 Wildfires across California and Oregon have caused poor air quality in the region.

Since the beginning of 2020, California and Oregon have seen more than 9,200 wildfires burn across more than 4.5 million acres. The widespread devastation has not only cost more than 30 lives and the destruction of thousands of structures, but is now spreading dangerous smoke and ash around the country.

Across the West Coast, hospitals have been pushed to adapt to keep patients and staff safe. For some facilities, that has meant evacuation. In California, Adventist Health St. Helena decided at the end of September to suspend patient care and transfer all patients to other hospitals. Oregon’s governor issued temporary evacuation orders for facilities including Samaritan North Lincoln Hospital and Legacy Silverton Medical Center.

For other health systems, preparation has meant developing policies to improve the air quality within critical facilities. The smoke coming from these fires carry respiratory threats, some of which mimic the symptoms seen in COVID-19.

“Due to our location, we deal with wildfire smoke almost on a yearly basis,” says Rick McGuffey, director of facilities management at Sky Lakes Medical Center in Klamath Falls, Ore. “Sometimes the smoke will sit in the Klamath Basin for up to two weeks, which presents low air-quality conditions.”

The facility has been on high alert, McGuffey says, since one major fire skirted within 20 miles of the medical center. As the administration made plans to relocate a small clinic from the area, the facilities team began taking steps to improve air quality for patients.

“There is not much you can do about the smell, but we install charcoal filters to help keep the particulates out,” McGuffey says. Charcoal, or carbon, filters are often used to absorb pollutants from the air. “We also change our other [HVAC] filters more frequently to be sure we are doing everything we can to keep our patients and staff safe.” The Sky Lakes team takes indoor and outdoor air samples each day to ensure these measures remain effective.

In San Luis Obispo, Calif., Jeremy Ralston, facility engineer and safety officer with the San Luis Obispo Surgery Center, says, “Most days, the quality of air is anywhere from the Red zone to the Yellow zone.” The Environmental Protection Agency’s Air Quality Index describes its Yellow zone as having a “moderate” level of concern, while a Red level is likely to cause serious health effects for sensitive populations.

Ralston says that the facility’s three-stage filtration was able to filter out most particulates but could do little to remove the smell of smoke. As a result, they have installed charcoal filters to remove any lingering irritants that could impact patients with respiratory issues.

The facilities team also has reduced the HVAC system’s typical 100% outside air intake down to 40% to reduce the level of polluted outside air coming in. To ensure the air-handling units could keep up with the changes, the team had to redo the air balance. “We had to beef up all of our air handlers a little bit to circulate a bit more air through,” Ralston says.

For that reason, Ralston advises health care engineers who have not yet been impacted by smoke to reach out to their HVAC contractors to put a plan in place for balancing and potentially installing a charcoal filter system. With reports of smoke from the fires spreading as far as New York and even into Europe, health systems that have not previously dealt with this threat may want to prepare.

“Get protocols in place ahead of time,” Ralston says.

As he worked to develop a plan for the smoke, Ralston soon found a few other health systems had insight on best practices. “We were able to get a policy in place in 24 hours, and we have a policy companywide now.”

At least part of that plan should focus on updating inventory needs. While cycling out filters, the Sky Lakes facilities management team is keeping a close eye on inventory levels, McGuffey says.

“With the smoke on top of the pandemic, we were watching our [personal protective equipment] supplies very closely,” McGuffey says.

How to prep for worst-case violence in hospitals

AHA will host a joint webinar Jan. 17 on key ways to protect patients and staff

How hospitals prepare for volcano and earthquake threats

Major volcanic eruptions and earthquakes might occur less regularly than other disasters, but the threat is still real.