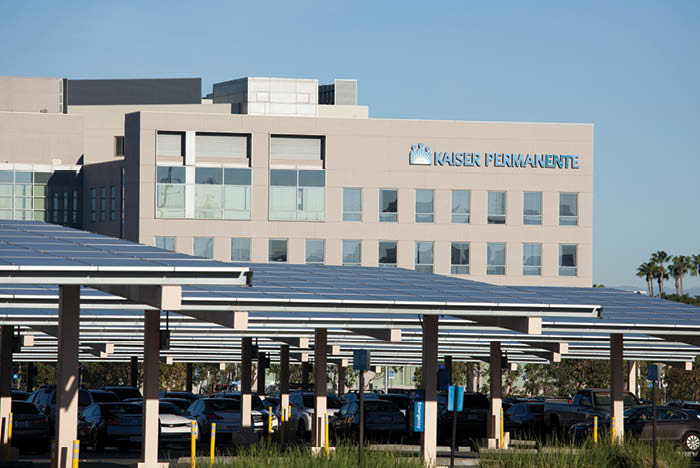 Although the health system has had a focus on sustainability since the 1950s, in 2016 it began to aim specifically for carbon neutrality. Reaching this milestone started with systemwide improvements in energy efficiency.

Ramé Hemstreet, vice president of operations for national facilities services at Kaiser Permanente, says, “We install occupancy sensors to turn off the lights when nobody is in a room. We purchase ENERGY STAR® appliances that use less electricity and install low-flow and automatic water fixtures contributing to a 15% reduction in water use intensity, another goal. In most cases, the initial investment to implement these efficiency solutions is quickly offset by the energy savings.”

As that effort was maximized, the focus shifted to renewable energy production, including more than 360-megawatts (MW) of wind and solar generation and 44 MW of on-site solar arrays across 100 sites.

Hemstreet adds that achieving carbon neutrality also meant ensuring that every department across the system understood its role in reducing emissions.

“While certain business functions — specifically our facilities and community health functions — held accountability for reaching this goal and led working groups that planned and executed specific actions, the work to protect against climate change is embedded throughout Kaiser Permanente’s operations,” he says. “It is part of how we manage our buildings; purchase food, medical supplies and equipment; and serve our members, as well as how we purchase and consume energy and process waste.”

The system also has invested in carbon offsets to counter emissions from natural gas-powered heating and cooling systems. However, Hemstreet notes that Kaiser has partnered with the Renewable Thermal Collaborative, a coalition of organizations committed to decarbonization by 2050, to identify other ways to reduce its reliance on natural gas.

“While on-site natural gas combustion is currently the only feasible way to heat and cool our hospitals, we continue to pursue efficiency opportunities such as evidence-based ventilation to reduce its consumption, as well as solar thermal and other renewable technologies for heat and hot water,” he says.

While carbon neutral is a big accomplishment, it’s not the end of the line. Since becoming certified by the CarbonNeutral Protocol — an organization that sets clear guidelines to achieve carbon neutrality — for actions taken to date, the health system has set a goal of achieving carbon positivity by 2025. The next step toward that goal is reducing the carbon intensity within the supply chain.

“Steps toward this goal will include purchasing from suppliers with low carbon emissions, increasing the lifespan of our products to reduce waste and reducing business-related vehicle trips,” Hemstreet says.

It’s a big goal, one that may seem unattainable for smaller health systems with fewer resources. Hemstreet acknowledges that Kaiser Permanente has been able to pull many different levers to become carbon neutral, an option that may not be feasible for some organizations. However, he also is quick to point out that sustainability does not have to be “all or nothing.”

“Nonetheless, there are opportunities available for all organizations,” he says.

In fact, Kaiser Permanente outlined the steps it took to achieve carbon neutrality in “The Path to Carbon Neutral,” a document co-authored with Healthcare Without Harm. The steps include measures such as setting public goals and sharing best practices, reducing energy use through energy-efficiency measures, moving to on-site and off-site renewable energy production, and reducing waste through recycling and sustainable procurement.

Health care system moves closer to carbon neutrality by end of year, and carbon positive by 2025.