Hospital gets better at communicating 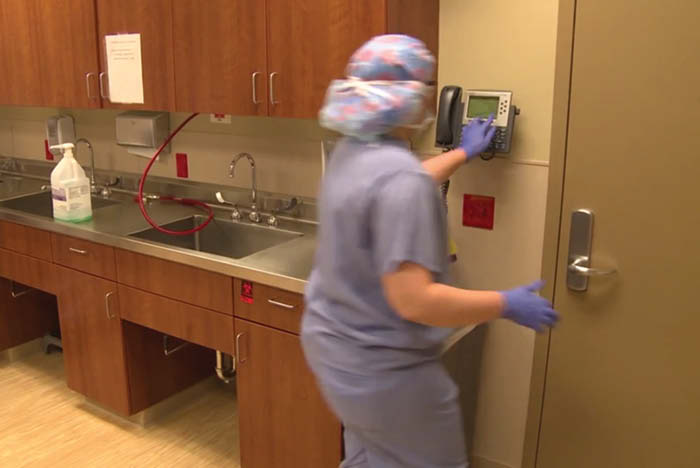 As the hospital updates and expands its facilities, Matt Neyrinck, senior communications tech at Aspirus Healthcare, is always looking for ways to use the technology the organization currently has in new applications. His efforts are guided by the simple goal of making the lives of the people who work in the hospital easier so they can provide excellent patient care.

During a recent renovation to update the surgical operating rooms (ORs) of an Aspirus hospital, Neyrinck discovered that there were no plans to integrate an intercom system into the new ORs. Incorporating them at that point in construction would have been a costly purchase that also would have delayed the opening by four to six weeks.

At the same time, Neyrinck was looking for a way to replace the legacy paging system that was well past its prime. “We wanted to look at something that was going to be more reliable, because in an OR setting, you can’t have downtime,” Neyrinck says.

In need of a communication system for the new ORs as well as an upgrade to its legacy paging system, Neyrinck saw an opportunity to update and streamline the current paging process for the entire facility. The hospital needed a simple system for communicating with medical staff while not sharing sensitive pages with patient families.

Neyrinck suggested using the hospital’s Cisco Systems (San Jose, Calif.) phones to implement Madison, Wis.-based Singlewire Software’s InformaCast for medical paging. This allowed him to set up a uniform paging system, so regardless of what OR was being used, the paging codes on the phones would be the same. This also allowed him to designate specific paging zones, which was helpful in protecting patient families from hearing sensitive messages. “We used to do ‘Code Blues’ throughout the whole hospital,” Neyrinck says. “All of a sudden, you’d hear the page with the room number, and if you know that’s where your family member is, that’s not a good feeling.”

Neyrinck uses InformaCast to establish paging zones throughout the building to ensure the proper pages are being heard by the right people. Code Blue pages that provide the room number are restricted to the surgical area. A tone is played throughout the rest of the building to alert medical staff a Code Blue is taking place and signals them to check their personal pagers to see if their assistance is needed. This keeps the pages discreet and doesn’t create unnecessary worry among family members.

Another use Aspirus has found for the InformaCast system is to help optimize its sterilization process for surgical supplies. The hospital delivers dirty surgical supplies to its sterilization and cleaning area by sending a cart down from surgery via an elevator. However, there was no easy way for hospital staff to alert the cleaning team that dirty supplies were being sent. This resulted in the elevator filling up and supplies not getting cleaned in a timely manner.

Neyrinck worked with the surgery manager to incorporate InformaCast so staff could alert the cleaning team with a simple push of a button. When the equipment is loaded onto the elevator, the team member who loaded it presses a button on a nearby Cisco phone that automatically triggers a page alerting the sterilizing team that dirty supplies are on their way down.

Localized paging zones means the message is only sent to the sterilization area and does not disrupt other hospital routines. The same system is used when supplies are cleaned and sent back up to the surgical area, saving time and reducing stress.

As Aspirus perfects its InformaCast paging, it is also looking to take advantage of other InformaCast features to enhance its mass notifications for scenarios beyond medical issues. Neyrinck is currently demoing the InformaCast CAP plugin to eliminate the need for weather radios currently in place. This will allow Aspirus to automatically alert staff when severe weather is approaching.

Hospital gets creative to protect staff from COVID-19

Innovative use of a firestopping product allowed a hospital to supply ventilation to patients without staff entering the room.