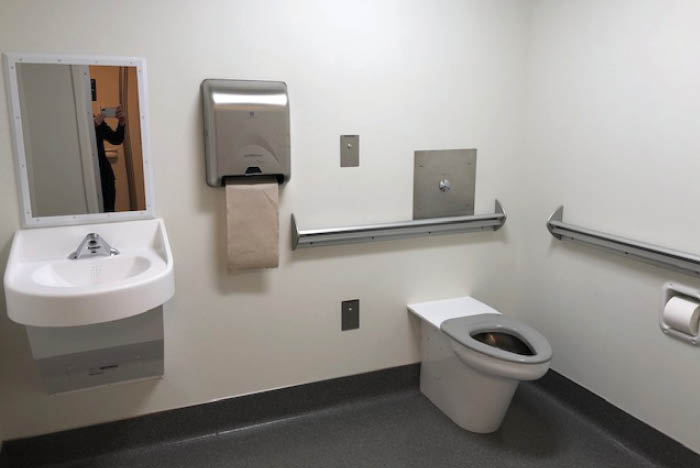 “Safe bathrooms” in emergency departments can help limit the risk of patient self-harm.

When hospitals experience shortages of space designed specifically for behavioral health patients, it can lead to more patients boarding in emergency departments (EDs) for longer than average times.

“The system gets backed up, and people wind up in the final safety net: the emergency department,” says Abigail Donovan, M.D., of Massachusetts General Hospital.

This trend has caused the risk of patient self-harm to rise, as well, which is why Donovan led a study and developed recommendations around increasing safety measures. The results were published in The Joint Commission Journal on Quality and Patient Safety.

While psychiatric acuity of these patients has increased, not all EDs are equipped to optimally care for them, and not all staff are formally trained to handle psychiatric emergencies. Also, prolonged stays in a loud and overcrowded ED can add to a patient’s stress.

“Providing compliance solutions that address life safety issues and security concerns is a constant balance,” says Chad Beebe, AIA, CHFM, FASHE, deputy executive director of the American Society for Health Care Engineering. “Facility managers understand safety issues, but not necessarily those around security; and, on the security side, it can be the opposite. So, it’s really important that those two work together.”

An ED is filled with objects that can be used for self-harm, and personal objects can conceal potentially dangerous items. Donovan and her colleagues concentrated on several areas to revise and improve.

Self-harm is attempted in ED restrooms at a significantly higher rate than other areas. Donovan’s task force created “safe bathrooms,” with features that include shatterproof fixtures and mirrors, paper wastebasket liners, mirrors and curtains that allow visibility while protecting privacy, and special training for observers to discreetly monitor patients.

Patient observers were added, too. Given the high volume and space constraints of the ED, one-on-one observation of every patient is not feasible, but the task force determined that one observer could effectively monitor up to three patients. These are new roles, Donovan says.

“They only work in the emergency department and, as they became familiar with our patients, the clinical presentations we’re working with and the hazards that are present in one area versus another, they develop an intimate knowledge and understanding of the ED milieu,” she says.

The new-hires’ training includes key safety issues such as suicide risk, possession of dangerous items, ingestions and the risk of harm to others. They review a checklist of safety concerns with the patient’s nurse that both must sign.

Though access to all personal items could be banned, the task force believed that patients in crisis benefit from access to cellphones and other diversionary materials. Unfortunately, sometimes harmful items are hidden in them. So, belongings are stored, and if the patient wishes to keep a cellphone, the case is removed. All other requests for belongings are considered individually by the nurses and searched before returned.

Many patients are willing to change into safer clothing, but those who are not present particular challenges, including legal ones. The task force decided that forcibly disrobing the patient would depend on an individual risk assessment by the ED physician, which may include input from psychiatry. For others, alternative safety precautions include reducing clothing to a single layer, turning pockets inside out, pat downs, and removing items such as belts, drawstrings and shoes.

For patients who present an exceptionally high risk of self-harm, the task force developed interventions that include one-on-one observation, additional or repeated searches of the patient and belongings, and prompt psychiatric consultation around the patient’s safety.

The new protocols worked. In the first year after they were introduced, the number of episodes of attempted self-harm was reduced by more than half, and only one resulted in actual self-harm.

“One of the most important and exciting aspects of this project is that it wasn’t a single role group coming up with these protocols,” Donovan says. “It’s critical to have that multidisciplinary mindset. Everyone plays a role in patient safety, and everyone’s role is critical.”

AHE Executive Director Patti Costello on challenges for those who clean and maintain care facilities.