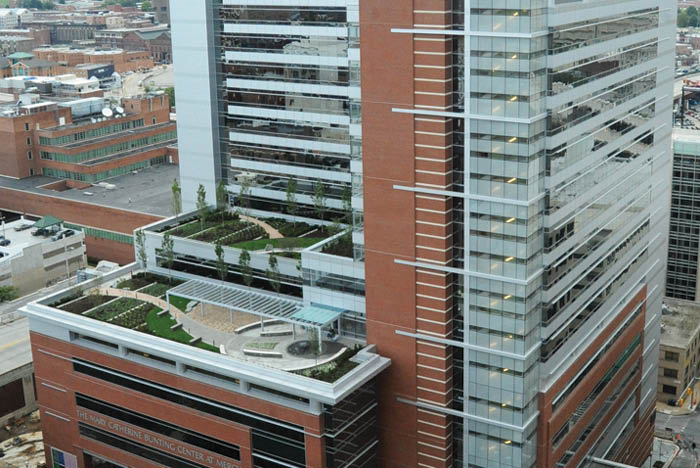 The Mercy Medical Center project includes upgrading 900 feet of steam piping and other infrastructure around the campus.

When the facilities team at Mercy Medical Center, an acute care university-affiliated teaching hospital in Baltimore, began internal capital replacement discussions around how to handle the aging chilled water plant serving its 20-story McAuley Tower, it recognized that it had a range of options to consider.

“We went through a rigorous process,” says Robert Beckwith, vice president of support services and construction at Mercy Medical Center. The department weighed building an on-site boiler plant, a central utility plant, and even a cogeneration plant that could supply steam and chilled water as well as electricity. “In the end, Vicinity [Energy] offered the best solution,” Beckwith says.

Vicinity Energy, a U.S. district energy provider, pushes steam and hot and chilled water from a centrally located plant through a network of underground pipes to customers. In Baltimore, more than half of the steam delivered to its customers is generated through renewables, resulting in significant greenhouse gas emissions reductions. However, it was the redundancy provided by the proposed system that tipped the scales for Mercy Medical in favor of expanding upon a 60-year relationship with the district energy provider.

“With interconnected central facilities, backup generation and multiple water and fuel sources, our district energy systems’ built-in redundancy directly addresses this need and delivers the reliability that hospitals and our communities depend upon,” says Bill DiCroce, president and CEO of Vicinity Energy.

The district chilled water is being tied into Mercy’s existing chilled water facility to keep both resources available for added redundancy to the hospital.

“By adding Vicinity chilled water as a supply, it adds a level of backup that we otherwise wouldn’t have,” Beckwith says. The system updates include expanding chilled water piping on-site by an additional 550 feet to support this new chilled water connection. The resulting infrastructure upgrades will quadruple campus cooling output.

The construction portion of this contract began in January 2021 and will run through August 2021. In addition to the chilled water expansion, Mercy is upgrading the aging steam system infrastructure that converts high-pressure steam into medium- and low-pressure. This upgrade involves the relocation and replacement of 900 feet of steam piping, as well as a complete survey of the steam system for additional inefficiencies or needed upgrades. As the piping is buried, repaving and other aesthetic improvements will take place.

Ultimately, Mercy Medical will combine three existing steam contracts with its partner under a single agreement. In addition to moving forward with the steam and chilled water updates, the campus has contracted its provider to perform annual preventive maintenance for the campus’ steam mechanical rooms.

“Because their maintenance costs are spread across multiple customers, they are able to offer a better price per volume rate than by replacing the system ourselves,” Beckwith says. “By consolidating our steam services into a single contract, we were able to achieve savings.”

Beckwith’s team worked closely with Mercy’s chief financial officer to evaluate the financial and risk exposure from extending its contract. Ultimately, the team determined this approach would decrease annual maintenance spending as well as energy costs, even with the expanded chilled water service.

As construction moves forward, there have been few issues with which to contend, despite the volatile material prices shaking so many construction budgets today. “So far, we have not encountered unexpected cost,” Beckwith says.

In fact, the savings identified with this new chilled water plant agreement has led to additional opportunities. Beckwith says that the medical campus is reexamining its entire energy system as a direct result of this project.

“As a secondary improvement, we have embarked on a multimillion-dollar air-handler replacement project for McAuley Tower.” As work is completed on the current project, the medical center will install a new prepackaged penthouse air-handling system on the roof.