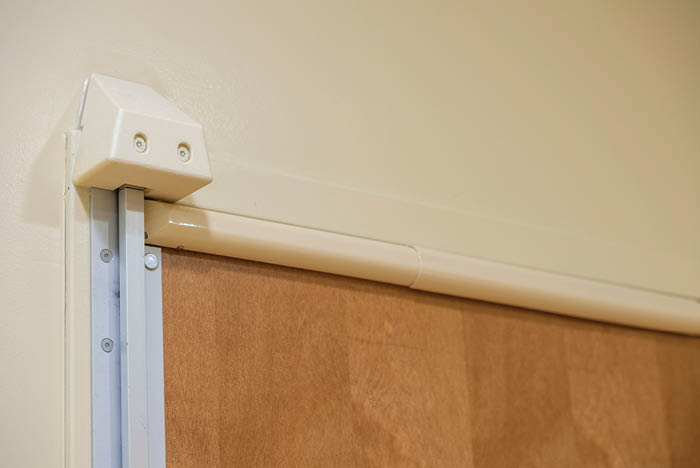 The 3D block removes an anchor point next to the alarm bar that runs across the top of the door to notify hospital staff of a suicide attempt.

The VA Pittsburgh Healthcare System has had over-the-door alarms in place in all of its in-suite bathroom and corridor doors since 2015.

However, last year, a staff member identified a vulnerable area on the bathroom doors that had not been used as a means for self-harm but still posed a risk that VA Pittsburgh wanted to eliminate. That vulnerable point was a small area of the door that, if used as an anchor point, was too far from the over-the-door alarm to trigger it and alert staff to a potential patient harm event.

“It came down to what to do about it,” says James MacAulay, supervisory general engineer at VA Pittsburgh. “We had meetings with the behavioral health staff and with the suicide prevention staff. It was a joint push that we needed to do something about it once it had been discovered.”

The team’s decision was to create a physical block to cover the area that would not be detected by the alarm if used as an anchor point. MacAulay took the lead on the project and worked with Human Engineering Research Laboratories (HERL), a collaborative effort between VA Pittsburgh and the University of Pittsburgh, to design a 3D block that could be placed atop the door frame.

“We had to make a tight design that also was not creating a ligature potential in itself,” MacAulay says. “We didn’t want to put something up there that somebody could still use to tie or wrap something around.”

HERL used a 3D printer to produce 90 devices in three weeks. The nylon blocks are placed throughout its mental health wing, adding to its safety.

How to identify, observe and remove ligature risks in patient settings.

ASHE advocacy expert breaks down how to design for continuous observation in various health care settings.