Editor's note: This article is the fourth part of a 14-week series titled "Reliability Asset Management: Getting Started." The series explores the use of reliability-centered maintenance in health care facilities. One article will be published every other week.

Health care facilities managers have an understanding that if we’re doing our jobs right, those that comprise the health care ecosystem (patients, staff, visitors) won’t even know we’re there.

And that’s because we put just as much work into our repairs as we put into doing our repairs quietly. Whatever the work, whatever the crisis, we do what it takes to get the job done right, and to get it done unseen.

We build teams of extraordinary technicians and managers and fight for them every day. And when all hell breaks loose, it’s our incredible teams that fix it unnoticed.

Our teams prove they are the best because they make things happen — no matter the cost, crisis or sacrifice, and despite the potential for burn out.

In 2007, I was a facility manager at a hospital with a very old central plant. We were always in crisis. I’d wake up with a strategy and to-do list and by afternoon I would throw the plan out. We put out metaphorical fires for breakfast, lunch and dinner. 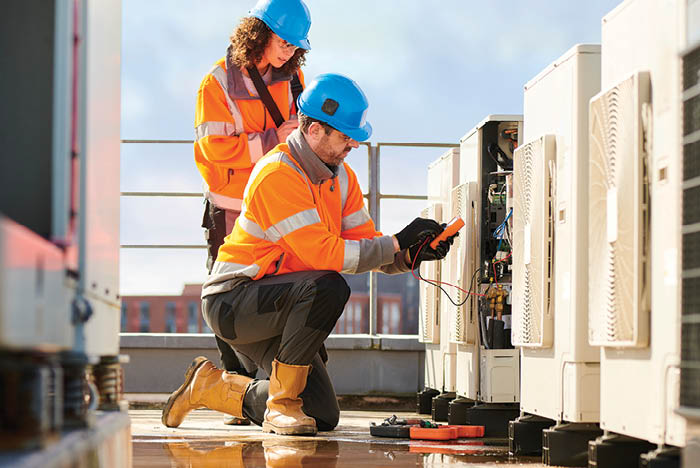 It was during this time that I heard about reliability-centered maintenance (RCM), a way to determine the best course of maintenance for systems and equipment. It made sense, but I was skeptical. I was working 15-hour days and the crises never stopped enough for me to dedicate to reorienting how we approach equipment maintenance.

By chance I met a vibration analyst at a tradeshow who offered to come in and show us what he knew. We selected a particularly cranky air handler that served four floors of critical spaces, and he went to work. He took his readings, gathered his data and three days later came back to talk.

He’d found some issues with the bearings and the shaft. We custom ordered the replacement parts (remember, this was a very old central plant) and ordered a shut down. The team did excellent work, and after a long Friday night of work, we were back up by 5 a.m. After some forensics, we confirmed the bearings we’d replaced were already shot, and the old shaft was seriously deteriorated.

The vibration analyst was right. If he hadn’t come in, we would have had a catastrophic failure on equipment meant to serve critical spaces, and I would have gotten that midnight call we all dread. Instead of one overnight of work, it would have been days.

And my team would take the brunt of it and work as long or late as needed to get the job done, and get it done unnoticed. They would do it because they were the best. If that’s what was needed, then that’s what they’d do.

Maybe not that month, but within six months that air handler was going to fail. Thanks to the vibration analyst, I was able to catch a bearing and shaft replacement before it turned into an inevitable catastrophic failure. And if I had a vibration analysis program in place before then, we would have caught the problem before it ever advanced to needing an overnight shutdown.

I learned that day that if we could have that program in place, my team wouldn’t have to sacrifice nearly as much as they had been.

Our technicians and managers are what make our operations excellent. Whatever catastrophe they are facing, they do what it takes to get the job done right.

And I learned to fight for them by keeping them from burning out.

If you’re interested in learning more, be sure to look out for a new handbook on reliability asset management that the American Society for Health Care Engineering will be publishing soon.