Program puts nature in the center of its design 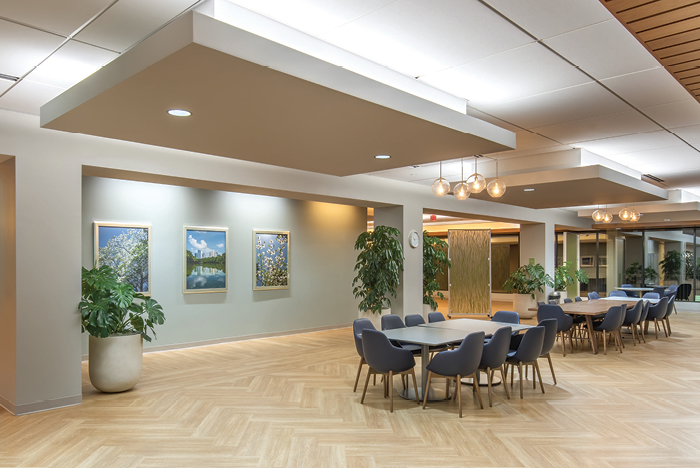 People with mild cognitive impairment (MCI) undergo relatively rapid declines in memory and reason not typical of their age. Amy Rodriguez, M.D., director of therapeutic programs in the cognitive impairment program at Emory School of Medicine, says that the facility allows it to serve patients in a new way.

“At diagnosis, patients are given recommendations on modifications to their lifestyles in an effort to maintain or slow the decline in memory, but they aren’t offered any support on how or where to do that,” Rodriguez says. “Our vision was to create a program and space that would give people the support they need to address these lifestyle factors.”

And it’s more than just a space. Leaders of the program — which is a partnership between Emory, Atlanta’s Georgia Institute of Technology’s Institute for People and Technology and its SimTigrate Design Lab in the College of Design — wanted to ensure the space was optimized for supporting its members with MCI.

The center was designed by architecture firm Nelson Worldwide and puts a focus on evidence-based design with features such as flooring to reduce slips, trips and falls; intuitive wayfinding; and features to reduce impact noise. The design team also leaned heavily on biophilic design concepts to create an uplifting, stimulating and supportive space that feels less clinical and more community oriented.

Some of its nature-centered features include an abundance of natural light streaming in from windows that surround the center in its entirety, a soothing color palette of greens, flooring and wall panels made of natural woodgrain patterns, nature walls and carpet tiles that feature a moss-like design

“[The patient family advisory team] wanted to see nature incorporated in some way, as they felt it was really important to providing a calm, soothing environment for their loved ones,” Rodriguez says. “We wanted to incorporate touches of nature without making the space feel too busy or overwhelming — nature in a contained environment,” Rodriguez adds.

Patients at Walter Reed have access to a two-acre woodland area used to help treat PTSD.