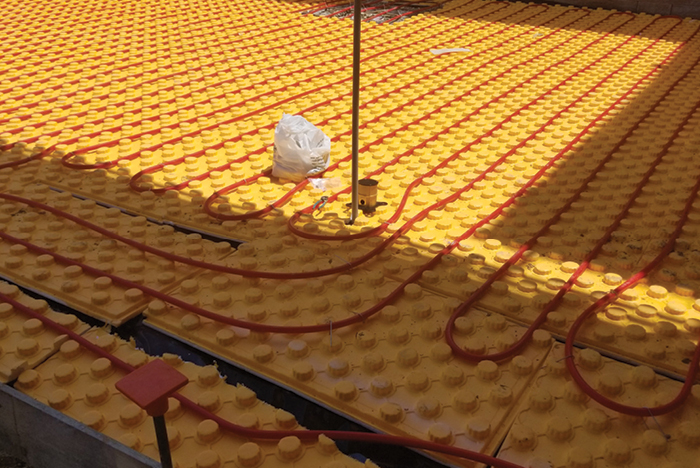 When moisture and a low temperature are detected, the SIM system prepares for melting, which eliminates the need for the hospital to schedule snow removal or salt treatments.

The expanded emergency department (ED) at Adena Regional Medical Center, Chillicothe, Ohio, was completed in 2019, and the increased treatment areas and a more convenient registration area were all integral to the shorter wait times and greater privacy being enjoyed by patients today. One key concern for those operating the physical space, however, was getting patients in and out of the ED safely, particularly during Ohio’s snowy season from December to March.

Snow and ice leading to entrances can threaten the safety of not only medical professionals, but patients as well. When moving patients from the helipad or ambulance bay, ensuring the route is free of hazard can save lives.

“Time is of the essence when the rescue squad brings in a sick patient,” says Jim Jones, Adena’s building systems supervisor. “Our nursing staff and the rescue squad work quickly to move patients from the ambulance or helipad into the building, so we want to create a safe working environment.”

Options such as shoveling and salting would mean an increase of manual labor, risk and potential damage to ground surfaces. So, instead, the medical center and its project team sat down with mechanical contractor Weller’s Plumbing & Heating Co. to develop a snow and ice melting (SIM) system that would provide the safety needed while reducing strain on staff and infrastructure.

Weller’s worked with manufacturer’s representative Weber-Huff and PEX piping manufacturer REHAU to sketch out the design. The team specified four zones of the SIM system, with three zones for the sidewalks and one zone for the helipad. With a goal of having the highest British thermal unit (Btu) output with the least amount of pipe, they calculated that the design required a 10,500-square-foot heated area with 52 circuits and seven manifolds. A snow melting capacity of more than 1.5 million Btus per hour was provided using warm fluid circulating through 14,600 feet of three-quarter-inch RAUPEX O2 barrier pipe.

While the SIM systems within the helipad and sidewalks both relied on RAUPEX pipe, the design and installation differed. For the helipad, 12 inches of concrete were placed atop 2 inches of insulation board to prevent heat from sinking into the ground.

Creatherm boards were placed 5 to 6 inches below the concrete sidewalks and, from there, the installers simply snapped the piping in place with pre-made building plastic diamonds inside the boards. In addition to ease of installation, the Creatherm boards minimize heat loss by preventing heat from traveling into the ground.

The team also used 820 feet of REHAU INSULPEX running from the basement to the manifolds. A concern the team had was evenly heating the space given the circular shape of the helipad and the curves of the sidewalks, but the flexibility of INSULPEX allowed the piping to easily match the contours.

The team installed the SIM system in two phases and had it operating in time for winter 2019.

“The system ran flawlessly,” Jones says. “Over the years, I’ve worked with a lot of systems that didn’t function the way they were supposed to. The SIM system performed the way we hoped it would, keeping the sidewalks and helipad clear.”

The automated activation of the SIM system is another aspect of the application that Jones appreciates.

“The user friendliness of the system surprised me,” Jones says. “We don’t have to monitor it constantly, which is nice because we are already busy enough.”

Connected to the hospital’s building automation control system is a Tekmar controller, which allows the hospital staff to see from their computers whether the SIM system is running or not. The system controls data provided by outdoor sensors, which prompts the SIM system to operate only when snow and ice can accumulate. Once the helipad and walkways are free of snow and ice, the system automatically shuts off.