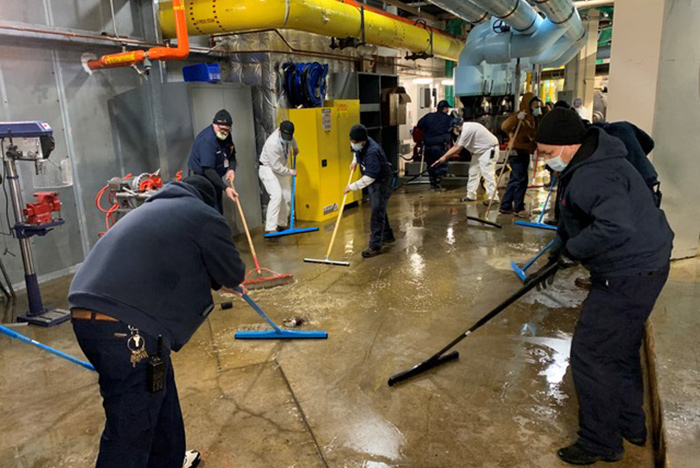 Editor’s note: This article is the third part of a series on the impacts of climate change and climate events on hospitals and health care facilities and related planning, preparedness and response efforts.

Extreme cold weather in parts of the country not accustomed to those conditions can pose substantial challenges for health care facilities managers. In February 2021, Winter Storm Uri swept across a large swath of the United States bringing ice and freezing temperatures over multiple days. The impacts in Texas were especially harsh with massive power grid failures across the state and disruptions to water supply systems.

“To go down to zero degrees Fahrenheit, our systems weren’t equipped for it,” says Clayton Smith, SASHE, FACHE, CHFM, vice president of facilities operations at Children’s Health, Dallas. “For instance, our generator room in Dallas is inside the building, but it was bringing in outside air at zero degrees. So we actually froze sprinkler lines and chilled water lines. When they froze, they broke and dumped water all over the switchgear. At our Plano campus, our boiler room has 100% outside air for combustion air, and it froze all the support piping into big blocks of ice because of that high humidity.”

Smith says buildings in places such as Texas are not designed for cold weather the way they are in northern states. In cold weather regions, buildings maintain moisture and vapor barriers are located on the inside of buildings. In southern states, however, those vapor barriers are on the outside of buildings where the moisture levels are typically higher. As a result, Smith says the low temperatures caused a great deal of condensation to accumulate inside his facilities.

Although blackouts affected much of Texas, Children’s Health is part of the demand response program of ERCOT, the state’s energy provider, and Smith’s facility started up its generators prior to the cold weather event to help ease the load on the power grid.

Timothy Peglow, SASHE, associate vice president of patient care facilities at MD Anderson Cancer Center, Houston, says that some of the health system’s suburban facilities did not have power. The broader impact, however, was that the loss of electricity in the city affected the water distribution system for several days.

While the MD Anderson Cancer Center facilities did lose water service because of the winter storm, Peglow says the experience of a watermain break in Houston the previous year, which also disabled the water system for a number of days, helped with recovery efforts.

“We were able to adapt at that point earlier in time and test all our water plans,” he says. “So that was all relatively fresh. We had reviewed in detail how to bring buildings back online and had those plans saved from that event. How long did we have to chlorinate the buildings? How did we test the water in the buildings when the boil notice was lifted? Then when we had the freeze and lost water, it was much easier to execute the recovery because we knew what to do and had guidance from the year before.”

Smith says that in the long term, preparation and response at his facilities will likely focus more on procedures than changes to the physical infrastructure of the buildings themselves.

“In spaces like generator rooms and boiler rooms, we are adding supplemental heat,” he says. “For closed loop systems, we’re using some control sequences. A chilled water system may be satisfied from a temperature perspective, but we will still flow water through it to keep that line from freezing. There are also process things that we’re changing, more so than building type and building methodologies.”

Extreme cold weather can affect hospital operations beyond the facility itself when transportation systems are affected. For Smith, one lesson from Winter Storm Uri was the importance of ensuring warehouse distribution sites remain accessible. He says the experience made clear the importance of maintaining needed equipment on-site for response and recovery.

“We did a lot of work staging people and equipment at the hospital campuses, but the materials management people have to roll every day,” Smith says. “We had to take resources and get them to our off-site warehouse location to keep the docks and roadways clear so those trucks could keep moving because they bring critical supplies to the patients and are critical to our operations.”

Planning ahead is also crucial, adds Taylor Vaughn, CHFM, CLSS-HC, facility manager at Children’s Health, Dallas. Although her facility is prepared to be operationally sustainable for 96 hours, she still kept close and constant tabs on the situation during the winter storm.

“It’s best to have a plan and a tool so you can say, ‘We have this much fuel on-site, we have this many patients, we can run for this many hours because we’re going to put this load on the generator,’” Vaughn says. “If we lose normal power, at some point, we’re going to have to start working with emergency management to either set up parts of the building, move patients, try to consolidate a little bit. Having those tools ready beforehand to calculate things out saves time and is vital.”

Smith previously worked at health care facilities in Florida and became familiar with hurricane planning and preparedness. He says this experience with hurricanes was useful in dealing with the cold weather event in Texas. For example, Smith’s staff was prepared to remain at the hospital for a period of time to assist with recovery efforts.

“When we had that winter storm, I looked at it from a planning perspective just like a hurricane, and I used some of those same planning methodologies,” Smith says. “We brought in all of our maintenance technicians at all our hospitals and planned to defend in place. Because our job right then was to keep these patients supported, which is the exact same thing you do in a hurricane.”

The Health and Human Services Office of the Assistant Secretary for Preparedness and Response (ASPR) Technical Resources, Assistance Center, and Information Exchange (TRACIE) has compiled plans, tools and templates to prepare for extreme cold.

Managing the Storm After the Storm: Healthcare in Texas Recovers from Severe Winter Weather is an article about the experience of health care facilities in Texas during and after Winter Storm Uri in February 2021.

The U.S. Environmental Protection Agency outlines the steps for restoring water quality after a service shutdown or reduced operations.

Health care facilities on the Eastern Seaboard build to prepare for hurricanes and flooding.