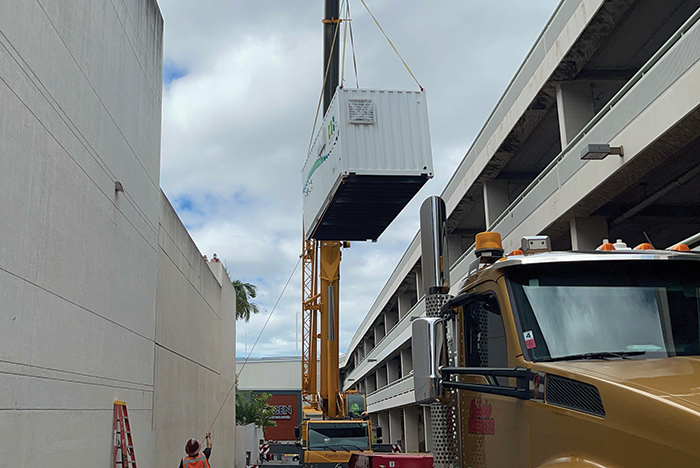 The Hawaiian Islands are the most geographically isolated group of islands on Earth, located more than 2,000 miles from the nearest continental land mass. Because of this, health care facilities managers in Hawaii are always looking for ways to improve resiliency.

To this end, the American Society for Health Care Engineering (ASHE)-affiliated state chapter, Hawai’i Society for Healthcare Engineering (HISHE), explored the topic of oxygen concentrators at its August 2021 chapter meeting. After the meeting, several health care systems were considering the viability of installing concentrators in their hospitals.

A technology comes of age

Then, the COVID-19 pandemic Delta surge hit the islands, and one of the side effects was a shortage of oxygen. This made the decision much easier, and all three of the major health care organizations in Hawaii decided to proceed with projects at their facilities.

The story of one of those facilities — Pali Momi Medical Center in Aiea, Hawaii — should be of interest to all health care facilities managers because similar pandemic impacts have occurred on the mainland. Moreover, climate change is causing more frequent and more intense storms, which also can have an impact on oxygen use and delivery.

In August 2021, an emergency was declared by the state of Hawaii, and all oxygen production was reserved for medical customers. The state only has two small air separation plants on the island of Oahu and none on the neighboring islands. Due to the COVID-19 pandemic Delta variant surge, the increased demand for medical oxygen required that production from the plants be ramped up to full capacity, and supply for all industrial customers was curtailed.

Health care facilities like Pali Momi Medical Center, part of the Hawai’i Pacific Health (HPH) not-for-profit health care system, were required to monitor and report usage daily. Everyone was asked to try and conserve oxygen. This required understanding how the oxygen was being used and how much each type of respiratory therapy demanded. Facilities managers were forced to learn more about the details of their bulk liquid oxygen and distribution systems.

Almost all hospitals and health care systems lease their bulk liquid oxygen systems from industrial gas companies, which design, construct and maintain the systems. Consequently, not all health care facilities managers are intimately aware of the operation and capabilities of their oxygen systems.

All managers have a working knowledge, but not all know the system capacity. The maximum system capacity is based on tank volume, vaporizer capacity, and distribution piping size or flow limits. Health care facilities managers have multiple sources and tools to help determine their system’s capacity.

First, they should work with their suppliers to verify the tank size and vaporizer capacity. For the actual capacity of the facility’s piping and distribution system, Kaiser Permanente’s national facilities services’ facilities strategy planning and design department published a document on medical air and oxygen capacity that can assist facilities managers in calculating their system’s capacity.

Med Gas Insights from BeaconMedaes, Issue 8, April 2020, is another great resource for researching how oxygen is being used in a hospital. By using this article and working with the respiratory therapy manager, Pali Momi Medical Center staff members were able to put together the table above for determining oxygen usage.

Finally, ASHE has a Medical Air and Oxygen Capacity Assessment Tool that was designed to help hospitals and health care systems evaluate piped medical gas system capacity. The tool can show the usage of a particular medical gas system when different types of therapies are in use.

At Pali Momi Medical Center, the bulk liquid oxygen system capacity was being pushed to its limit. By working with their supplier, Airgas USA LLC, and using some of the available tools, facilities professionals determined that the vaporizer was the limiting factor.

Vaporizers will always have a small amount of ice accumulation, but when flows reach or exceed design rates, there can be a significant accumulation of ice on the vaporizer fins, which reduces the efficiency of the heat exchange process. Pali Momi Medical Center’s maintenance staff began daily inspections on each shift and instituted a deicing process using water. (Hot water and steam also can be used and may be more effective in colder climates).

Additionally, working with the Healthcare Association of Hawaii, the Hawaii Emergency Management Agency (HI-EMA) and HPH, Pali Momi Medical Center explored the possibility of installing an oxygen concentrator to help ease the demand for oxygen in the state.

After getting buy-in from the organization, the decision was made to purchase an oxygen concentrator by the end of August 2021. Capital funds were approved the first of September, and a purchase order was issued on Sept. 6.

Once the decision was made to purchase and install an oxygen concentrator, the size, location and where to connect to the existing system had to be determined. Pali Momi Medical Center decided to purchase a remote oxygen concentrator system (ROCS), which is a completely assembled system in a 20-foot intermodal shipping container.

Pali Momi Medical Center doesn’t have the space in its central plant for a system, so the ROCS solution proved ideal. The container was placed just outside the central plant in an adjacent, open parking garage and connected to the existing system using the emergency oxygen supply connection. Pali Momi Medical Center purchased the largest system available that could produce up to 600 LPM of Oxygen 93 USP. 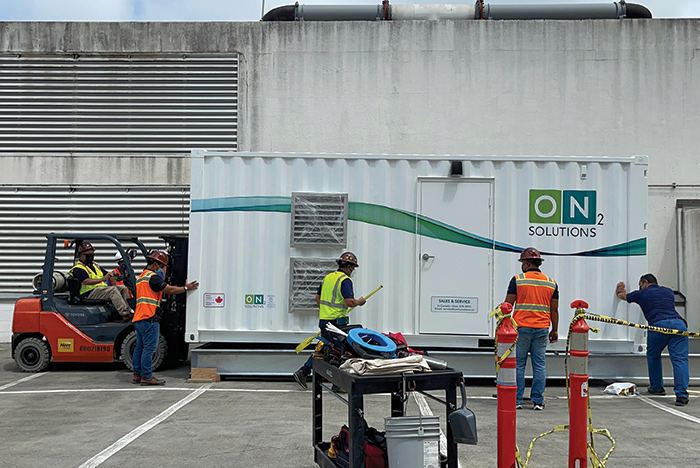 The remote oxygen concentrator system is a completely assembled unit in a 20-foot intermodal shipping container.

Given the supply chain issues that were impacting all industries in the U.S. at the time, there was a concern about the logistics and how long it would take to ship the unit from Manitoba, Canada, to Hawaii. Fortunately, because an emergency declaration had been issued in Hawaii, the Federal Emergency Management Agency (FEMA) was authorized to provide logistics support and handled all aspects of delivery. Ultimately, the system was manufactured and shipped within three weeks, and it arrived at Pali Momi Medical Center on Sept. 29.

However, the team was able to install the oxygen concentrator into the ROCS while it was still on the trailer in less than two hours. After only a minor delay for the lift, the project was able to proceed with minimal impact.

The ROCS unit was then lifted into place and connections were made that day. It only took two days of final assembly and testing before the system was ready for operation. The concentrator was installed and fully operational by Oct. 1, which was an incredibly short amount of time, thanks to the extraordinary efforts of everyone involved.

It is amazing how a team comes together in times of crisis. The effort required by the Pali Momi Medical Center staff, the local contractors, the manufacturer, and the support of FEMA and the HI-EMA was nothing less than heroic. To put together a project like that and complete it in less than two months was phenomenal.

As promised, the system produces 600 liters per minute of oxygen, which helped reduce the demand and free up supply for the other hospitals and health care providers in the state. Another benefit is the reduction in operating costs. The project had a benefit-to-cost ratio of 1.58, an internal rate of return of 20%, and a simple payback of 3.9 years with an overall operational cost savings of 53% (daily cost of liquid oxygen versus oxygen concentrator). 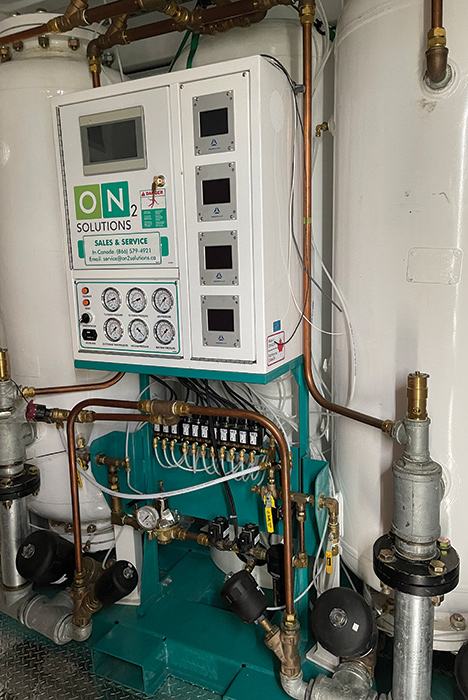 Hospital maintenance staff received training on the system and a daily inspection and checklist was developed. The staff are comfortable monitoring performance and have a basic understanding of system operation, but the local equipment representative has been contracted for preventive maintenance and repair services.

The system is comprised of three components: a medical vacuum pump, a medical air compressor and the oxygen concentrator. Whether or not to outsource service depends on the level of expertise of the hospital’s maintenance staff.

The subject of maintenance is closely related to the question of redundancy. The ability to take the system offline for maintenance and repairs must be considered. If the oxygen concentrator is the primary source, N+1 redundancy will need to be designed into the system. If it is a hybrid or backup system, the liquid oxygen system provides the needed redundancy.

System performance has been excellent with no failures or glitches up to this point. The only issue is the inability to accurately determine actual usage. Currently, the only way is to calculate based on runtime hours and average flow based on readings from each shift. A mass flow meter is on order to be added to the system, providing for exact measurement.

At the time of this writing, two of the other health care systems in the HISHE group also have installed, or are in the process of installing, oxygen concentrators at Hawaiian health care facilities.

With pandemics, climate change and other demands on health care organizations today, it is incumbent upon facilities management professionals to look for new and better ways to improve the emergency operations plan and the resiliency of their organizations. Oxygen concentrators should be part of every health care facility’s plans, whether they are used as the primary source, emergency backup or a hybrid solution.

For rural and remote locations, utilizing oxygen concentrators as a primary source for oxygen may make the most sense. For other locations, where liquid oxygen is more readily available, utilizing it for redundancy or for emergency backup is still a very good idea. In a disaster, such as an earthquake or tornado, roads may not be accessible. So, having an on-site source of oxygen could prove critical.

In addition to providing a reliable primary or emergency backup source of oxygen, these systems can save money. With all the strains being put on health care organizations to reduce expenses, every health care facility should at least consider it.

Tony Moiso, CHFM, CEM, is director of facilities management at Pali Momi Medical Center in Aiea, Hawaii. He can be reached at anthony.moiso@palimomi.org.

The 2021 edition of NFPA 99, Health Care Facilities Code focuses on operational management of these systems.

How efficient is your liquid oxygen system?

Resources to help differentiate between normal and excessive oxygen leakage, and how to troubleshoot issues.