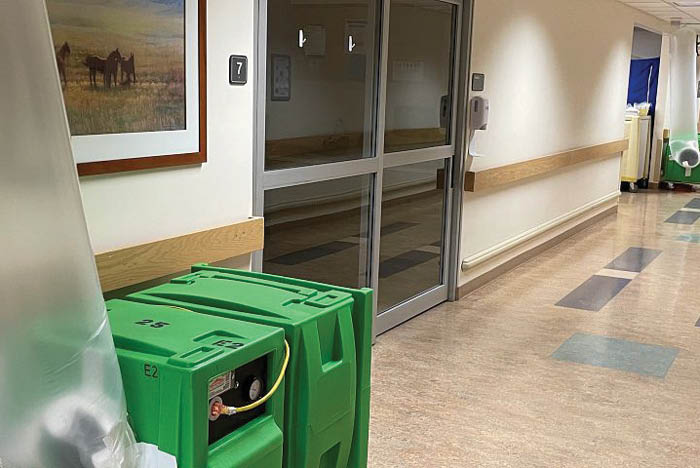 Thanks to the speedy and effective response of its staff, Avista Adventist Hospital in Louisville, Colo., was able to safely evacuate 51 patients and caregivers in under two hours, with no loss of life, after a major wildfire named the Marshall Fire spread through its community and within feet of the facility last December.

Although the hospital did not sustain fire or structural damage, it suffered smoke damage that required it to close for 19 days while the building underwent extensive professional round-the-clock cleaning.

“The cleanup went remarkably well, considering this was something our hospital and entire organization had never been through,” says Isaac Sendros, CEO of Avista Adventist Hospital, owned by Centura Health. “Approximately 100 cleaners and an industrial hygienist worked to ensure the facility was safe and ready for caregivers and patients, allowing us to reopen on Jan. 18.”

Sendros notes that all air filtration systems were replaced, and more than 200 air scrubbers were put into operation 24/7. The cleanup also included extensive and repeated wipe-downs of all walls, floors, ceiling tiles and surfaces. The team also conducted testing of water and all equipment. These efforts required extensive coordination, including the removal of all equipment from rooms so that they could be cleaned separately.

“Our facilities team’s quick thinking to turn off the air-handling system before evacuating occupants limited the smoke damage by preventing far more smoke from entering the building. This made the efforts to clean the building much more achievable in a relatively short time frame,” Sendros says. “In addition, it was critical that air filters and boilers were top priorities for our team following the fire to keep the building warm during the cleanup efforts.”

Hiring an industrial hygienist to test for quality throughout the cleanup process was essential as well, to ensure that the facility would be safe, clean and ready to receive patients and caregivers again.

“I am also grateful for the support and willingness of our teams to help across departments and job descriptions. Many caregivers pitched in to help with the cleanup efforts in addition to the shifts they were working at other Centura facilities to care for evacuated patients,” Sendros says.

Sendros is particularly proud of how efficiently building occupants were evacuated.

“You prepare for tabletop exercises where you run three scenarios of evacuating, never imagining you would actually have to evacuate with the hospital surrounded by fire. The fact that we were able to do it safely in under two hours is a testament to the great team we have at Avista,” Sendros says.