How hospitals prepare for volcano and earthquake threats

Major volcanic eruptions and earthquakes might occur less regularly than other disasters, but the threat is still real 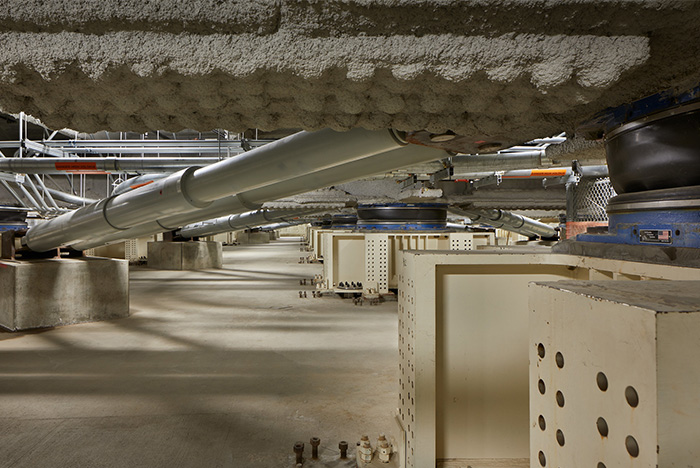 One of the 126 base isolators that helps to support the Loma Linda University Medical Center and allow it to absorb seismic energy.

The increased severity and frequency of extreme weather events has highlighted the relationship between climate change and natural disasters — such as hurricanes, flooding, drought and wildfires. Volcanic eruptions and earthquakes are natural disasters that may be less tangible because they are more infrequent, do not occur cyclically and affect only certain geographic areas. Although the threats may appear to be less immediate, health care facility planning and preparation are still essential.

In the United States, 161 potentially active volcanoes are located primarily in the Pacific Northwest, Alaska and Hawaii. While volcanoes do erupt regularly, major eruptions are less frequent. Still, the short-term and long-term consequences can be devasting. For example, the Kilauea volcano in Hawaii erupted in 2018, and lava flows destroyed more than 700 homes.

One impact of an eruption is the release of massive amounts of ash into the air. When Mount St. Helens in Washington state erupted in 1980, it sent a plume of ash that traveled eastward and reached parts of Canada. Hospitals in affected areas contended with both facilities operations issues and impacts to surrounding communities and regions.

“The eruption avoided major population centers, but life was miserable,” says Arthur Kjos, former principal at Clark/Kjos Architects. “I don’t even know if they could get a life flight helicopter in the air because there was so much ash. Do you have enough air filters to change them once a day? How do you shut down parts of the hospital so you don’t have to filter that air? What if lava flow comes right to your hospital?”

Additionally, part of Mount St. Helens collapsed and resulted in volcanic mudflows called lahars. The debris, composed of things like trees and boulders, mixed with ice, snow and water to create 3 billion cubic yards of materials that moved through 17 miles of the North Fork Toutle River valley, destroying buildings and infrastructure in the pathway of the flow.

Critical care and emergency facilities cannot be built in lahar zones. For hospitals, these restrictions can complicate construction and development, as Kjos discovered while working on the design for an expansion of MultiCare Good Samaritan Hospital in Puyallup, Wash., near Mount Rainier.

“Good Samaritan is literally in the foothills of Mount Rainier,” Kjos says. “When it erupts, all the snow on top of it will melt and there is a risk of flood occurring. What we discovered in development was that part of the existing building was in the lahar zone. We were embarking on a $400 million expansion to the hospital. If we couldn’t build it on that site, we would have been in deep trouble.”

Ultimately, a closer analysis showed that the current building was five feet above the lahar zone, 100 feet above the valley floor, and that the new facility would be 15 feet outside of the zone. Still, says Kjos, this experience highlighted the challenges of building health care facilities in vulnerable areas, the information needed to predict the threats and the long-term considerations that must be taken into account.

The threat of volcanoes in some ways is similar to that of earthquakes, Kjos says. “It’s not a matter of if or when this might happen. It’s going to happen someday.”

“Earthquakes are a very real threat, particularly here in California, and we’re due for a big one,” he says. “I tell people that the worst thing you can do from a planning perspective is to assume that it won’t happen here, that it’s going to happen somewhere else. An earthquake is going to have a huge impact on the state and on our operations.”

In the aftermath of the Northridge earthquake in 1994, California passed additional legislation requiring health care facilities to meet more stringent seismic safety building standards. Kaiser Permanente considered retrofitting its buildings but decided to rebuild some facilities. This approach has required substantial capital investments, but meeting the highest standards was a priority for the organization, Skivington says.

“We know we’re going to see an influx of injured people, depending on the time of day and the magnitude of the earthquake,” he says. “We have to be ready to move them through triage as quickly as possible. The worst case scenario is to have to evacuate a hospital with inpatients and doing that safely. If a building is standing, we may expand services to handle patients, or we may have to close it and then consolidate those people and resources at facilities that withstood the earthquake.”

Eric Schilt, vice president of planning, design and construction at Loma Linda University Health, says his system initially planned to retrofit Loma Linda University Medical Center, located near both the San Jacinto and San Andreas faults in Southern California. In 2010, after a series of cost and operational challenges, the decision was made to instead build a new facility, which opened in August 2021.

The design of the $1.3 billion project addressed the seismic threats and includes a number of cutting-edge resiliency features.

“One of the unique things about our building is that it’s the tallest hospital in California and one of the largest on base isolators,” Schilt says. “It’s 17 stories, just under a million square feet, and sits on 126 base isolators. Gravity-based isolators essentially allow the building to move so that it absorbs seismic energy. We also have a very bulky, heavy frame.”

The building currently can withstand lateral movement, but vertical isolation could be added in the future through a retrofit, Schilt says. He notes that designing and building a facility like Loma Linda University Medical Center requires balancing investments and planning for the future. For this hospital, the benefits of additional resiliency measures, such as additional chillers for use during power outages, and shell floors that would allow for future expansion had to be weighed against the costs.

While volcanic activity and earthquakes are not tied as directly to climate change and as predictable as other extreme weather events, planning and preparedness for these disasters can be part of an organization’s broader resiliency strategy, Skivington says.

“There are definitely intersections in the planning and response for earthquakes and volcanoes,” he says. “We have found over the years that about 80% of the activities that we do to prepare can apply to a number of situations. That supports what we call an all-hazards approach. It just underscores that much of what you do for one scenario works for all scenarios.”

The immediate and long-term impacts of destructive wildfires extend beyond a health care facility’s walls into the community and beyond.

How one hospital prepared for the effects of extreme heat

Effective planning and preparation are essential to ensure that extreme heat doesn’t bring operations to a standstill.