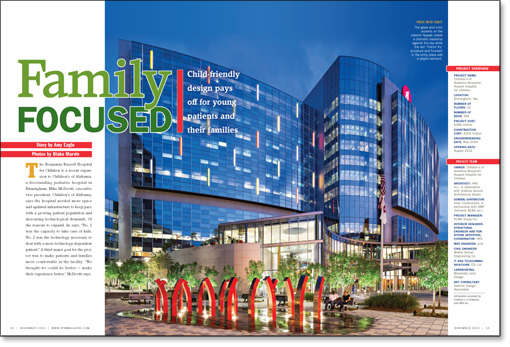 The Benjamin Russell Hospital for Children is a recent expansion to Children's of Alabama, a freestanding pediatric hospital in Birmingham. Mike McDevitt, executive vice president, Children's of Alabama, says the hospital needed more space and updated infrastructure to keep pace with a growing patient population and increasing technological demands. Of the reasons to expand, he says, "No. 1 was the capacity to take care of kids. No. 2 was the technology necessary to deal with a more technology-dependent patient." A third major goal for the project was to make patients and families more comfortable in the facility. "We thought we could do better — make their experience better," McDevitt says.

The hospital is located adjacent to the campus of the University of Alabama at Birmingham. To give the building its own identity, the exterior of the 12-story expansion is primarily glass, a material that sets the new towers apart from the red brick and precast concrete used predominately on nearby university structures. The facade of the new facility is interspersed by colored panels, to give the hospital a cheerful aspect and make it easily identifiable on the Birmingham skyline.

To light the panels at night, architectural fins that conceal light-emitting diodes (LEDs) were incorporated into the face of the building. Placing the LEDs on the outside of the structure is beneficial from a waterproofing perspective and allows maintenance staff to service the lighting system without entering a patient room, says Doug Compton, AIA, LEED AP, principal with Dallas-based architecture firm HKS.

The form of the hospital is based on its operational needs. The project team determined that two patient units per floor with shared support space provided maximum efficiency for staffing. "So, basically, there are two rectilinear units," Compton says. "But there's a slight curve to soften them up a little."

All patient rooms face north toward downtown Birmingham or south toward Red Mountain, a local scenic landmark. Besides providing views, this building orientation avoids the glare and heat gain that can occur with an eastern or western exposure. Energy conservation was heavily considered in the design of the project, which was awarded a Gold rating for Leadership in Energy and Environmental Design (LEED) from the U.S. Green Building Council. 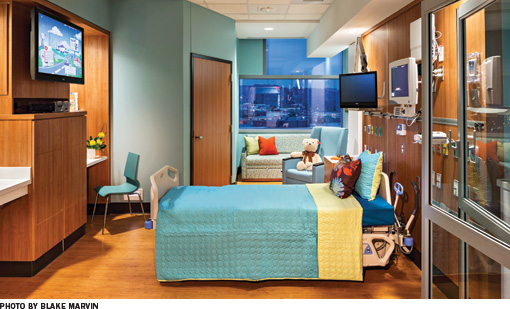 Patients and visitors enter the building through a motor lobby on the first floor, which features a large, colorful blown glass artwork that can be seen through the exterior glass and is intended to give the entrance a strong street presence. Glass elevators and a spiral staircase lead to the main lobby on the second floor. These elements serve a functional purpose and express one design philosophy of the building, which was to provide positive distractions wherever possible. The notion behind the staircase was to "get from Point A to Point B, but have some fun with it," says Compton.

The main lobby "has a clean, fun look that is bright and cheerful," he says. "There's nothing institutional about it." The exterior glass fills the space with natural light, which is reflected, along with the colors of the lobby, in terrazzo flooring with a high-sheen finish. "The floor was polished with an 800-grit diamond polisher instead of the standard 100-grit; the higher you polish a terrazzo like that, the more slip-resistant it is," says Iris Dates, IIDA, LEED AP, EDAC, vice president, HKS. "[The high gloss] made the floor even safer for people to walk on."

A flooring pattern reminiscent of a river leads people along what the hospital calls the "patient journey," past major building destinations like registration. A red circle, taken from the Children's logo, is incorporated into the flooring pattern at points where people can get help, like reception desks and nurse stations. This logo is also used as a graphic device on the upper floors of the building exterior, to reinforce the hospital brand.

Patient services are organized in two towers: the Harbert Tower and the Quarterback Club Tower. Each tower has a unique interior design theme, to help visitors distinguish one from the other and easily identify where they are in the facility. Each floor of the Harbert Tower has a wildlife motif, while each floor of the Quarterback Club Tower relates to a sport. The themes are expressed by large wall graphics, including distinctive images at the entrance to each patient room. "Each floor is a unique color. Each tower has a unique theme. Each patient room has a unique image," says McDevitt. "We did a lot to try to address the logic around wayfinding, because we know that is a stressor for families."

The design is meant to appeal to everyone from two-year-old girls to 18-year-old boys, says Dates. "You have to make sure both of them are happy in the facility and not embarrassed to be there." In designing a children's hospital, "we always say we want to make it childlike, but not childish," she says. 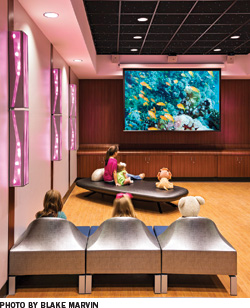 The patient units include a number of amenities, like laundry facilities and overnight accommodations, to help family members stay close to their hospitalized children and participate in their care [see sidebar, Page 18].

McDevitt says the first priority of the facility is to ensure that it is supporting the care and treatment of patients. But beyond that, he says, "it's about the experience [families] are having." He says that while people often cannot understand everything being done to address their child's health, "they sure can tell when they're in a facility that's been sensitive to their needs."

The Benjamin Russell Hospital for Children operates with the belief that "the best care team for the patient is the family," says Mike McDevitt, executive vice president, Children's of Alabama. "The family is as integral to the whole care process as the physicians and nurses and everybody else. Having [family members] comfortable in our facility means they're available" and able to be involved fully in their child's care, he says.

Each private patient room at the new facility includes sleeping accommodations for two guests, so both parents can stay overnight in the room. A wardrobe and a safe for valuables are installed in each room for family members' belongings. An in-room patient education and entertainment system provides Internet access for parents and children. In addition to the patient's television, each room has a guest television that allows parents to take a break with their own entertainment or news programming while their child is playing video games or viewing something else. Parents of hospitalized children can reach "their own point of frustration or exhaustion. You've got to think about that," says McDevitt.

It's important to think about the effect a child's illness can have on the entire family, he adds. "It's not just mom and dad, it's siblings as well." Particularly when dealing with chronic conditions, "sometimes it's very hard for families, especially with other children, to stay intact during some of those [hospital] stays," McDevitt says. Kitchenettes, laundry facilities and consult rooms designed for private conversations help to make things easier for families on the patient units. Waiting areas with Child Life activities, a movie theater known as the "Room of Magic," a performance stage for community groups, and outdoor green spaces provide families of sick children an environment in which they can be, as much as possible, simply families.

The Children's of Alabama leadership wanted the Benjamin Russell Hospital for Children to be rich in teaching and learning opportunities for parents and children, according to Iris Dates, IIDA, LEED AP, EDAC, vice president of HKS.

As an example, she notes the glass elevators installed between the first floor entry lobby, known as the motor lobby, and the main lobby on the second floor. "The reason we did the glass elevator," says Dates, "[is] kids can see the inner workings of that elevator as it goes up and down, so it becomes a teaching opportunity."

The building's main public amenities, like the café and gift shop, are accessed off the second-floor corridor system, or Main Street. This area includes a display describing the hospital's sustainable design. Mike McDevitt, executive vice president, Children's of Alabama, says, "We have a big presentation wall on our Main Street that talks about our efforts to be green." Those efforts, which earned the expansion project LEED Gold from the U.S. Green Building Council, include harvesting more than 30,000 gallons of condensate water from the air-handling units each day to reuse for on-site irrigation and to power the hospital's central energy plant. Information about these initiatives is presented in a manner families can relate to, McDevitt says, "like how many times we're refilling a water tower they might be familiar with."

The hospital published a guidebook to its extensive art program, so families can tour the collection and learn about the artists and artworks. "We have a broad mix of artwork," says McDevitt. "We think that part of creating a healing environment very much revolves around aesthetics." Because the hospital accepts referral patients from across Alabama, the collection is curated to represent the entire state.

Information provided by Children's of Alabama and HKS Inc.

The PROUD Family Health Clinic is thought to be the first of its kind in New Jersey.

Holistic health care that caters to children of every age guides the design principles behind today's pediatric facilities.