“For environmental services managers, infection prevention and patient satisfaction are critical focus areas,” Costello says. “Staff, including the management team, are evaluated and held accountable to quality outcomes the same as the hospitals. Outcomes, whether clinical quality or satisfaction, need to be ingrained into the culture of the entire environmental services department to draw the incentive compensation.”

Unfortunately, bonuses are often on the chopping block during cutbacks. The survey shows that 11 percent of hospitals eliminated cash bonuses for staff due to the economy or declining revenues/profitability; 36 percent eliminated staff positions; 37 percent had increases in deductibles for health insurance plans; and 34 percent had increased employee contributions to health insurance.

Another 24 percent cited outsourcing staff positions as a means of cutting costs. As one respondent explained it, “as staff have been cut, outside vendors/contractors have been used to fill those gaps.” But outsourcing is not always the answer. Said one respondent: “It takes time to recruit and build the case for not outsourcing.”

Still, many respondents report no changes, saying their facilities are in a growth pattern. One example: “No reductions. Facility is growing and expanding its services and size.” 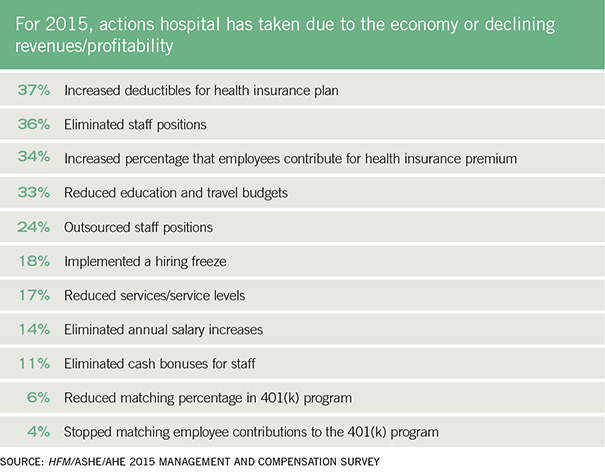 Growth — from supervising duties to salaries — is the wave of the future, Gosselin says. In fact, he is already seeing typical facility managers getting what he calls “dramatic increases in compensation, due to the responsibility increase.” For a midsize (200–400 bed) community hospital, he is seeing salaries in the ballpark of $110,000 to $130,000. “It’s rare to place someone at a director level for less than $100,000,” he says.

While facility managers aren’t connected as directly to day-to-day patient care as environmental services managers, they need to understand the huge role they play, and make sure upper management is aware of their contribution, Woodin says.

“The first challenge is to translate the impact of your role on patient outcomes,” he says. “Ask yourself how you make a difference in terms of impacting patient satisfaction and outcomes. Then set goals and share them with leadership. You’ve got to be your biggest advocate. Leadership’s understanding of how you support the institutional mission ties into a bigger paycheck.”