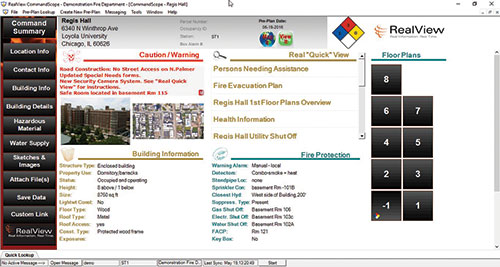 The Center for Translational Research and Education (CTRE) is the latest addition at the Loyola University Chicago Health Sciences Campus in west suburban Maywood, Ill.

The state-of-the-art CTRE houses 72 principal investigators, more than 40 researchers and a shared services staff whose goal is to turn fundamental scientific discoveries into treatments for human health.

As with Loyola’s other medical and educational buildings, the new research center utilizes CommandScope, a software program used by personnel responding to emergencies at a wide range of buildings and facilities, which provides detailed pre-plan information about facilities for emergency responders.

The software, offered by RealView LLC, a Chicago-based software development company that specializes in technology solutions, enables Loyola to meet federal requirements for establishing an emergency action plan and fire prevention plan at all of its buildings. The program offers the benefits of an effective pre-plan, which includes the vital property information that first responders need when responding to an emergency, according to RealView.

Every square foot about the new research center is entered into the software program, which can be accessed by mobile devices, desktop computers and touch-screen monitors on its medical campus within seconds. The software provides critical campus and building information in case of fire, active shooters, terrorism and incidents involving hazardous material.

The Health Sciences campus includes six facilities that house the university’s health sciences division, all of which use the CommandScope product. More than 70 Loyola education buildings at two other campuses in Chicago also utilize the emergency software. In addition, the Loyola Health System — a member of Trinity Health — uses CommandScope in eight buildings that comprise its medical center campus.

CommandScope enables Loyola to meet and exceed requirements related to the Occupational and Safety Administration's (OSHA's) Title 29 Code of Federal Regulations, Part 1910, Section 38 (29 CFR 1910.38). This part of the OSHA regulations requires businesses with more than 10 employees to develop and maintain an emergency action plan and a fire prevention plan.

In addition, CommandScope’s technical standards adhere to the requirements of both the National Fire Protection Association and the Department of Homeland Security’s National Incident Management System. The system serves as a template for procedures developed to execute a multifaceted rescue plan to save victims in emergencies.

“CommandScope has provided our first responders with all of the critical information they need to respond to a campus emergency in the most efficient way possible,” says William Sherry, superintendent of facilities, Loyola University Chicago.

“Being able to use any CommandScope station to access campuswide information is an added life-safety benefit that aids in the communication between our incident managers and emergency personnel,” he says.

Information is shareable, so even if personnel are unfamiliar with an emergency site, they will have working knowledge of the building, its occupants and its hazards before arriving on the scene.

“With this latest expansion, we bring every researcher and support staff the peace of mind that if an emergency does occur, first responders can perform with knowledge,” RealView President and CEO Stephen Nardi says about the use of CommandScope at the research center.

“We designed CommandScope with the mindset that this is an advantage first responders need and deserve. We are excited to see this technology further embraced by Loyola and expect it to become a staple on other university and hospital campuses as well,” Nardi says.

ASHE initiative aims to build stability and resiliency in the face of adverse weather events.