Tunable white light, or dynamic white light, and its support of human circadian rhythm is a hot topic in the lighting and controls industry.

Many health care lighting professionals have a good understanding of the possibilities of this technology, which is a system of cool and warm white light-emitting diodes (LEDs) controlled to allow light color and intensity change from one range to another.

What’s more, interest has trickled down to the general public as the mainstream media has reported on the effects of the color of light on the body’s circadian clock and the health benefits of maintaining a proper circadian balance. 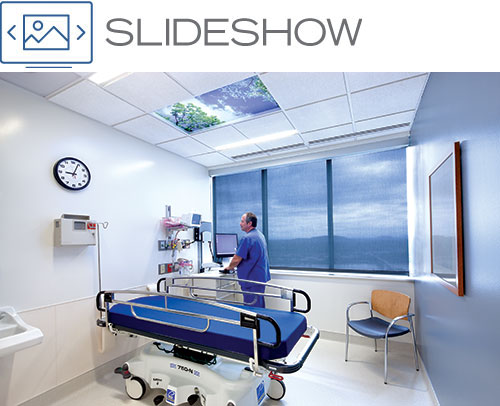 To engage the circadian process requires lighting designers to follow the 24-hour pattern of daylight through the dark hours of night. Going for a walk in the morning helps people to absorb the blue, short wavelengths of early daylight to entrain circadian rhythms. Toward late afternoon, when the light’s longer, red wavelengths are predominant, it’s best to reduce any contribution of blue light back into body systems. Daylight automatically supports all human, animal and plant circadian clocks.

Both daylight and electric light affect people in many ways. For instance, it was once commonly believed that night-shift workers should be exposed to blue light at night so they would stay alert and productive. But more recent scientific studies show that the suppression of melatonin from blue light at night, even for those who must stay awake and alert, has been linked to a variety of increased health risks.

In February 2015, the Lighting Research Center released a study that shows test results of red light and its effect on nighttime shift workers. The study indicated that red light — not surprisingly — did not suppress melatonin and interrupt the circadian rhythm. In fact, it indicated that alertness and performance increased under the red light.

The big question is whether tunable white light can support the circadian clock as effectively as natural light. The color range differs among manufacturers, but it is generally in the range of 6500 Kelvin (K) (cool/blue) to 2200K (warm/amber). Change from one color to another can be supported through any number of control systems/configurations but, more often than not, through digital multiplex (DMX) controls.

Luminaire manufacturers usually don’t provide the control system, but will reference the types of systems they support. It would seem the controls to support a shift from cool white to warm white LEDs would be somewhat simple, but most of the control systems tend to be fairly complex or not specific to the circadian 24-hour clock. Often, extensive programming is required or presets require manual activation.

Daylight on an overcast day is about 6500K warming in color temperature throughout the day to about 2200K for early evening light and 1800K at sunset, depending on latitude and time of day. To emulate the color temperature of daylight, the tunable white light range of 6500K to 2200K would seem reasonable (or anything within the same range).

What experts don’t know for sure is what dosage of daylight is required to make a significant contribution to the positive effects on circadian rhythms. Scientific studies indicate that as little as one-half hour of exposure to daylight between 6 a.m. and 9 a.m. set the circadian clock and an equal amount of early evening light after 2 p.m. will trigger melatonin. How does this correlate with electric light sources?

If lighting designers specify color temperatures to match daylight, is the exposure to electric light sources the same as to natural daylight? Scientists don’t know this with certainty yet. The industry is waiting to learn more about quantity and duration of electric tunable white light. So, what is a designer to do? For now, lighting designers must thoughtfully do the best with the current knowledge available, and work under the premise of doing no harm in the interim.

Planning lighting in hospitals to support circadian rhythms is complex at best because, unlike schools or office buildings, there are various types of spaces that require unique task support.

A control system is the most important piece of the tunable white light puzzle. It allows different color temperatures to be programmed, but also increases or reduces the intensity of the light. There are only a handful of manufacturers that produce both LED luminaires and controls as a set. Likewise, those same manufacturers only produce a small range of fixtures that support tunable white light. Most lighting and controls packages have been geared specifically to schools and office buildings.

Little has been done to support the health care industry, in which a wide variety of fixtures are employed to support a multitude of tasks and spaces. Health facilities professionals need a turnkey installation that includes both fixtures and controls that are factory programmed to support color-changing light throughout the day. Ideally, the user would experience a fluid, hands-off system from the point of activation. Manual overrides and additional dimming controls would be provided to staff where appropriate.

Any hospital space where people spend significant amounts of time can benefit from tunable white light and control systems. Primary areas for consideration would include patient rooms, nurse stations and corridors, neonatal intensive care units (NICUs), post-acute care units (PACUs) and critical care units (CCUs). Other areas of consideration might be hospital lobbies, cafés or emergency departments, and though these spaces are often day-lit spaces, they would also benefit from the warm white light at night. These ancillary spaces also tend to be areas where patients and visitors potentially spend quite a bit of time.

Circadian support likely wouldn’t be required in public restrooms or patient room bathrooms, lockers, equipment or storage areas, operating rooms and surgery corridors or any room where people move in and out or that requires additional task-specific lighting, such as surgery. Instead, lighting professionals should concentrate on the following areas:

Patient rooms. Even though most patient rooms today are day-lit, patient beds aren’t always close to the windows and daylight may not enter the room far enough to create a biological response to trigger circadian responses. The first step in determining the effectiveness of daylight in a room is to complete a daylight analysis that calculates how much light enters the room and the average duration of the light. Next, thoughtful design should include consideration of employing layers of light that can be modified for day and night.

Nurse stations and corridors. Nurse stations also are critical spaces to be considered for the potential benefits of tunable white light. Being commonly open to patient room corridors and located in building core areas, nurse stations typically don’t receive much daylight, if any. Because they are 24-hour areas that can be occupied for significant lengths of time, staff members’ circadian cycles can benefit greatly from the introduction of natural color temperatures.

Light levels and usage of patient room corridors can vary significantly from daytime to nighttime. During the day, corridors are busy with staff, patients, visitors and equipment in constant motion. Often, corridors are used as a therapeutic exercise path for patients following surgery. While light levels don’t need to be high for a circulation area, they should be uniform to avoid shadowing or veiling reflections of the floor. These areas also should be bright to induce activity and also to reduce contrast to brighter adjacent staff workstations.

At night when corridors are used primarily by staff, the preference is for minimal light levels that prevent light from spilling into patient rooms. Even at the nurse station, health care providers are requesting less general or ambient light at night and more task-specific lighting. A layering of lighting systems to be considered for daytime and nighttime effects allows the lighting designer to determine which fixtures should be on circadian support systems and which are not required. Additional controls — independent of circadian systems — for each luminaire group in staff and corridor areas allow for further dimming of fixtures or switching them off entirely.

NICU/PACU/CCU. The NICU was one of the first areas to use color-changing light to set the circadian clock in premature newborns. Color tunable white light allows for improved light quality and fine tuning of color temperature and, potentially, spectral power distribution from previous fluorescent systems.

While PACUs are more transitory, recovery times in some cases still can be significant. Returning patients to a circadian pattern after surgery and prior to relocation to patient rooms or hospital release sets the body systems in motion for the correct time of day.

CCUs typically keep light levels high for the intense level of monitoring that is necessary. However, providing color-tuned light according to the time of day may also be beneficial to patients. In addition to light penetrating the eye to incite a biological response, the skin also absorbs light. Eliminating blue light at night and reinforcing warm color temperatures may help to stimulate melatonin for a more restful and restorative sleep, which could, in turn, allow for a faster release to a standard patent room.

Where is it going?

Tunable white light is an important technological development that has wide-reaching implications for the general health of people who occupy buildings of all kinds. However, there is still much to study regarding overall effectiveness and dosage definitions relating to electric light and circadian support.

On the technical side, health facilities professionals, lighting designers and manufacturers should work in unison to establish control parameters. Mock-ups of systems are a valuable tool in verifying criteria and preferences.

Because not all hospital areas may require circadian support, it’s best to concentrate on those spaces where people spend long hours.

Lauren MacLeod, IALD, LEED AP is a senior associate and lighting designer for Stantec’s Lynnwood, Wash., office. She can be reached at lauren.macleod@stantec.com.

Tools in the healing process

The role of health care lighting in staff and patient wellness.