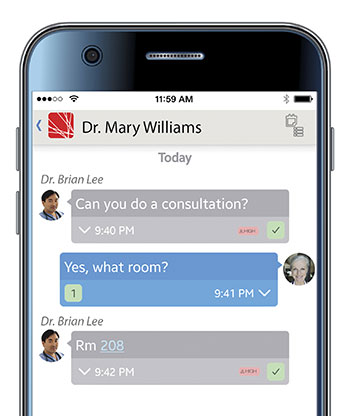 With more than 1,300 physicians across four hospitals and several outpatient facilities, the University of Utah Health Care (UUHC), Salt Lake City, was overwhelmed with requests from some physicians who needed a way to communicate with one another via their smartphones instead of pagers.

In response, UUHC implemented a basic text messaging communication system. Not long after, UUHC’s information technology (IT) and telecommunications teams determined that there were reliability and coverage issues in some areas of the hospital as well as security concerns involving patient information.

Plus, physicians were using the unsecure system to send patients’ protected health information (PHI), which was not compliant with HIPAA security requirements. “We knew we had to make a change,” Strong says.

Compliance is serious business. Under HIPAA, providers can face financial penalties for patient health information breaches that range from $100 to $50,000 per violation with a cap of $1.5 million per calendar year, according to the Advisory Board, a Washington, D.C.-based hospital and health system research, technology and consulting firm.

UUHC learned about a secure texting solution called Spok Mobile, which was offered by Spok Inc., a Springfield, Va.-based software company with which the hospital had worked before encountering the text message issues.

UUHC and Spok worked together to organize a trial program for the app. After successfully testing the solution with IT and telecom staff, the team rolled it out to a small group of tech-savvy physicians and clinical leadership, who gave positive feedback.

The health care system added more app testers and made improvements to its infrastructure by saturating the campus with Wi-Fi and cellular coverage.

“We needed a solution we could integrate into our workflows that was cost-effective, easy to implement and, more importantly, easy for our clinicians to use. Spok was the best fit,” Strong says.

UUHC since has rolled out the app systemwide and began offering it to medical residents during orientation. Today, the health care system has about 900 active users of the app, with plans to add an additional 2,000 users, says Allyson Tanner, communication services manager, UUHC.

The app enabled UUHC to become HIPAA-compliant because its encryption level meets HIPAA standards and also the app allows patient information in devices that are lost or misplaced to be remotely wiped, another HIPAA Security Rule requirement.

With Spok Mobile, a physician or clinical staff member can safely send PHI because the messagee is encrypted on the device and in flight. Users can look up and message others based on a directory or by their on-call role. This allows a message to be sent to a cardiologist on call even if that person’s name is not known.

The product also allows for messaging and alerts from third-party systems such as nurse calls, patient monitors and labs with critical test results.

Other system benefits include:

• Giving physicians the ability to reach one another quickly and easily via integration with existing communication systems.

• Escalating critical messages and logging all communications in an audit trail.

While use of the app has been invaluable across the UUHC system, it has been especially useful for emergency communication at its psychiatric hospital. This facility has a mobile crisis unit whose social workers can be dispatched to a patient’s home in an emergency with help of the app, Tanner says.

UUHC plans to replace 500 Wi-Fi phones used by nurses with the system, which will allow interaction with UUHC’s electronic health record, nurse call and patient monitoring systems. The system also plans rollouts to other groups including pharmacy, respiratory, and physical and occupational therapy.

A new mobile app has streamlined communication at the construction site of the new $750 million Anderson Lucchetti Women's and Children's Center in Sacramento, Calif.