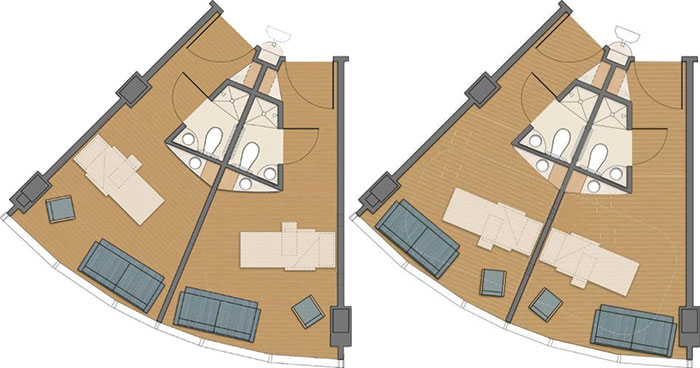 Moving patient bed headwalls from being visible from the hallway (left) to being obscured (right) resulted in patients reporting less noise and increased privacy.

If a health facility’s interior design plays a major factor in patient and staff satisfaction, can changing the orientation of patient room beds make a difference?

Design firm Gresham, Smith and Partners (GS&P) tested that question when Florida Hospital Waterman, Tavares, decided to move a 30-bed orthopedic medical-surgical unit to empty shell space in the floor above it.

The Florida hospital was concerned that the traditional design of the patient rooms with the headwall visible from the corridor was contributing to privacy and noise concerns and having a negative impact on patient satisfaction scores.

While staff frequently observed patients as they walked by their rooms or from the nurses’ station, they tended to not check on patients at the bedside as frequently. This pattern caused patients to perceive the care as inadequate.

GS&P reoriented the patient room beds in the new space so that the headwalls were out of direct view of staff by putting the beds behind the bathrooms; other design aspects for rooms on both floors remained largely the same. Researchers studied staff and patient response to the layout in the original unit and then to that of the new rooms for nine months each.

The study results were mixed, leaving the research team to conclude that “creating a safe, comfortable healing environment for patients requires a delicate balance between providing care and promoting rest, between surveillance and privacy.” The study will be published in the September issue of the Journal of Environmental Psychology.

The research found that actual noise levels and patient perceptions of noise were lower in the new room layout. The percentage of patients who reported that the area around their room was “always” quiet at night rose to 55 percent in the new layout compared with 46 percent in the old design, the study revealed.

HCAHPS data showed that patient ratings of the hospital were slightly higher with the new layout and staff spent more time in patient rooms. Despite the increased attention, data showed that the percentage of patients who said nurses always communicated well dropped from 71 to 69 percent.

Nurses agreed that the new unit is better in terms of noise levels and privacy for patients, but were generally neutral in recommending the new headwall configuration. Staff also were neutral in their opinion on whether the new design supports patient care and safety.