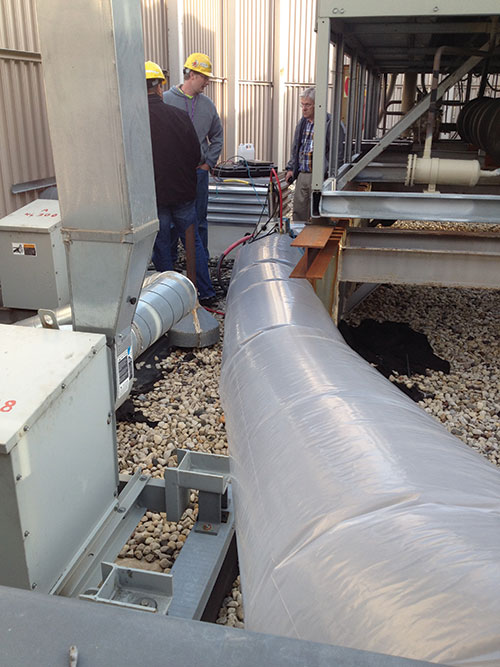 To minimize disruption and reduce costs, the medical center wanted to use existing ductwork for the pharmacy laboratory and the new rooms while still meeting stringent U.S. Pharmacopeial Convention (USP) 797 ventilation exhaust requirements.

In brief, the two main objectives of USP 797 are to keep the clinical staff safe while preparing the medications and to ensure the health and well-being of the patients who are taking the medications, explains John Villani, PE, vice president, Grumman/Butkus Associates, design engineer on the project.

“With the project at Condell Medical Center, this meant ensuring that the compounding rooms where the pharmaceuticals were actually prepared met USP 797 guidelines for proper exhaust,” Villani says.

Once the new compounding rooms were connected to the existing ductwork, testing revealed unacceptable levels of duct leakage that caused insufficient exhaust for compliance.

It appeared the medical center was limited to costly, disruptive options to solve the problem.

“At first glance, the existing duct system was inaccessible and therefore impossible to repair,” Villani says. On the other hand, building a completely new duct system was not an affordable option.

Someone with the design engineer firm was familiar with a duct sealing technology from Aeroseal, Centerville, Ohio, that is applied from inside the duct system as a nontoxic aerosol mist that seeks out and plugs leaks.

The product was chosen to solve the problem and, despite some initial skepticism by some involved with the project, it worked as promised. The product reduced the leakage rate 95 percent, from 400 CFM to 20 CFM and with minimal disruption to the facility’s normal operations. The entire process took a half-day to complete.

In an unusual development unknown at the time to others working on the project, one engineer skeptical of the product’s effectiveness had several 1/8-inch holes punched into the ductwork at the basement level to see if the sealant would work. He quickly became a believer.

“About 10 minutes into the sealing process, I radioed down to my guy in the basement and he told me the test holes I created were already sealed,” says Art Kopp, president, MK Industries Inc., an HVAC contracting company in Mundelein, Ill.

“Even with standard procedures and careful construction, it’s difficult to get leakage rates down to today’s tighter, cost-saving requirements,” Kopp says.

Jim Manako, project manager of general contractor Ragnar Benson Construction LLC, Park Ridge, Ill., is another Aeroseal system believer after witnessing the dramatic drop in the leakage rate after the product was applied at the Condell Medical Center pharmacy.

“Within seconds, the leaks were sealed,” he says. “The use of Aeroseal is ideal in a hospital environment where contamination, exhaust and IAQ [indoor air quality] issues are significant.”

Now the medical center pharmacy’s exhaust system is well within code and, as an added bonus, the engineers were able to achieve adequate exhaust at a much lower fan rate, reducing the pharmacy’s energy usage.

“The energy savings was really icing on the cake. By effectively sealing the leaks in the exhaust system, we were able to reduce the fan speed and reduce overall energy costs by 17 percent,” Villani says.

The product was developed at Lawrence Berkeley National Laboratory in 1994 and research on the product was partially funded by the Department of Energy.