The moments just before surgery can be riddled with anxious thoughts, especially for young patients who also tend to struggle with being separated from parents during uneasy times. National Public Radio reports that perioperative anxiety can delay the induction of general anesthesia and trigger release of stress hormones, which can have a negative impact on healing after surgery. This issue prompted two anesthesiologists at Lucile Packard Children’s Hospital Stanford, Calif., to come up with a way to comfort young patients prior to surgery. 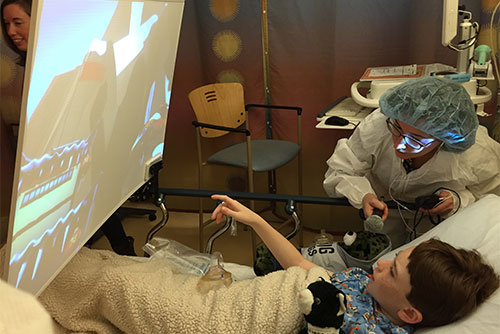 Pediatric anesthesiologists at Lucille Packard have created a system to keep kids relaxed in the minutes before going into surgery.

Pediatric anesthesiologist Sam Rodriguez, M.D., developed BERT (Bedside Entertainment and Relaxation Theater) from his own garage. The mobile system consists of a projector and a large, white plastic screen that can attach to a patient’s bed with clamps. Patients choose from a menu of age-appropriate TV shows, movies and music videos to watch all the way from their room to being transferred to the operating room. Even a countdown that features a deep-sea dive or rocket launch signals children that they are going to be immersed in an “adventure” as the anesthesia kicks in.

Rodriguez recruited a fellow pediatric anesthesiologist Thomas Caruso, M.D., to help gain support for the program. Together, the two were able to launch the program earlier this year.

The perioperative team at Lucille Packard says it is already seeing the benefits of using BERT and that work is underway to scale the program to other departments that have expressed interest.

In anticipation of a nursing shortage expected in 2025, Japan is developing 10 centers to create robots for senior patients living at home or in medical facilities, according to asiaone news site. The government has provided subsidies for robot development since 2013, but says that many of the options created do not sufficiently address the needs of elderly patients.

The new centers will bring together robot developers with nursing facility operators and actual patients to develop more effective products to aid in mobility, bathing assistance, monitoring and other tasks.

Hospital brings in VR to assist in pain management

After working with a patient whose pain source could not be identified immediately, Brennan Spiegel, M.D., gastroenterologist and director of Cedars-Sinai Health Services Research, says that he turned to opioids to reduce her discomfort. However, when the patient complained of the side effects — fatigue, confusion, constipation and drowsiness — he searched for alternatives. 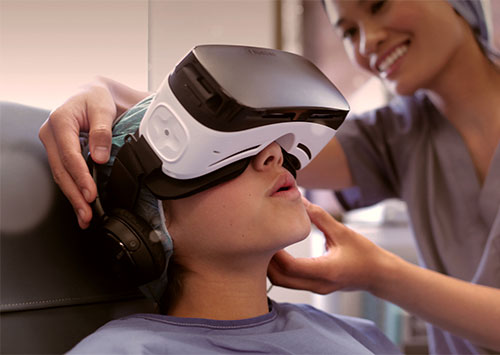 Doctors at Cedars-Sinai have found virtual reality as an effective alternative for pain management.

The hospital recently had completed clinical research with a company called appliedVR that shows a decrease in pain scores after virtual reality (VR) intervention. Spiegel tried the new practice on his patient and was shocked at how quickly it helped to ease her pain.

Although VR therapy was not the cure for the patient’s condition, it did help her heal faster than expected by putting her in a better physical state and mood. The patient was discharged the next morning.

“In my 18 years of practicing medicine, I have never seen a more immediate and effective response to a prescribed therapy,” Spiegel says.

Josh Sackman, president of appliedVR, says the company is collaborating with Samsung and Cedars-Sinai to look understand the full benefits of VR in health care. He says the next stage is "to also understand the additional economic and clinical impact from VR, such as morphine equivalent, length of stay, HCAHPS, as well as self-reported pain and anxiety."

Hospitals go the extra mile to keep up with patients and improve operations.